Trump: "No One Is Sure" What Happened, But In Any Case It's Obama's Fault 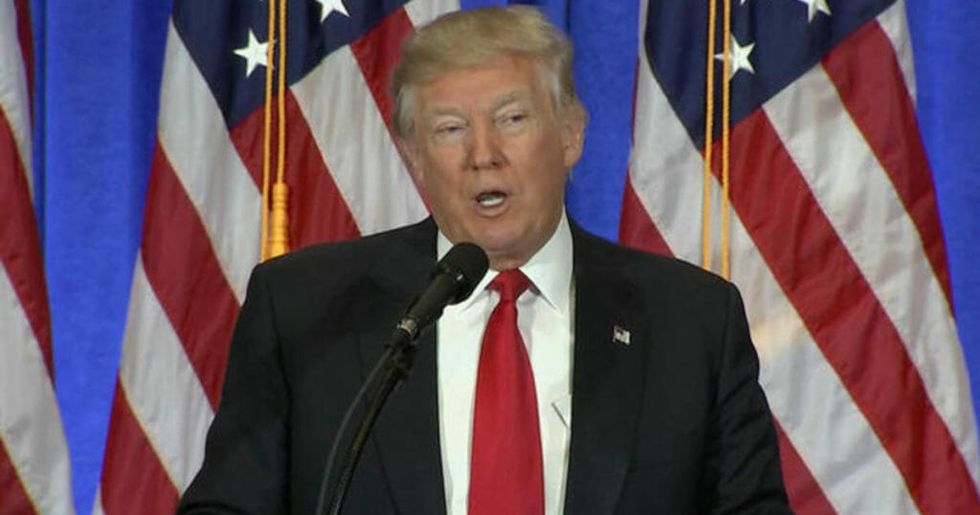 President Donald Trump kicked off his European trip on Thursday with a news conference in Poland in which he once again failed to accept the consensus of the U.S. intelligence community that Russia interfered in our 2016 election.

While acknowledging Russia was involved, Trump continued to muddy the waters, saying:

"I think it was Russia, but I think it was probably other people and/or countries, and I see nothing wrong with that statement," he said.

But perhaps most notable about his remarks was the world leader he reserved the harshest words for. While not mentioning Vladimir Putin by name, Trump slammed former President Obama for his response to the meddling.

Watch: Trump is asked if he believes Russia interfered in our election, instead attacks Obama and the media. https://t.co/IrfviRPwru
— Kyle Griffin (@Kyle Griffin) 1499338995.0

"Now, the election was in November. That's a lot of time. He did nothing about it."

"They say he choked. Well, I don't think he choked. I think what happened is he thought [Democratic nominee] Hillary Clinton was going to win the election," Trump said.

"And he said, lets not do anything about it. Had he thought the other way, he would have done something about it," he continued.

In October, the Department of Homeland Security and the Office of the Director of National Intelligence issued a joint statement confirming the U.S. Intelligence Community's conclusion that the interference into our election was directed by Russia.

The U.S. Intelligence Community (USIC) is confident that the Russian Government directed the recent compromises of e-mails from US persons and institutions, including from US political organizations. The recent disclosures of alleged hacked e-mails on sites like DCLeaks.com and WikiLeaks and by the Guccifer 2.0 online persona are consistent with the methods and motivations of Russian-directed efforts. These thefts and disclosures are intended to interfere with the US election process. Such activity is not new to Moscow—the Russians have used similar tactics and techniques across Europe and Eurasia, for example, to influence public opinion there. We believe, based on the scope and sensitivity of these efforts, that only Russia's senior-most officials could have authorized these activities.