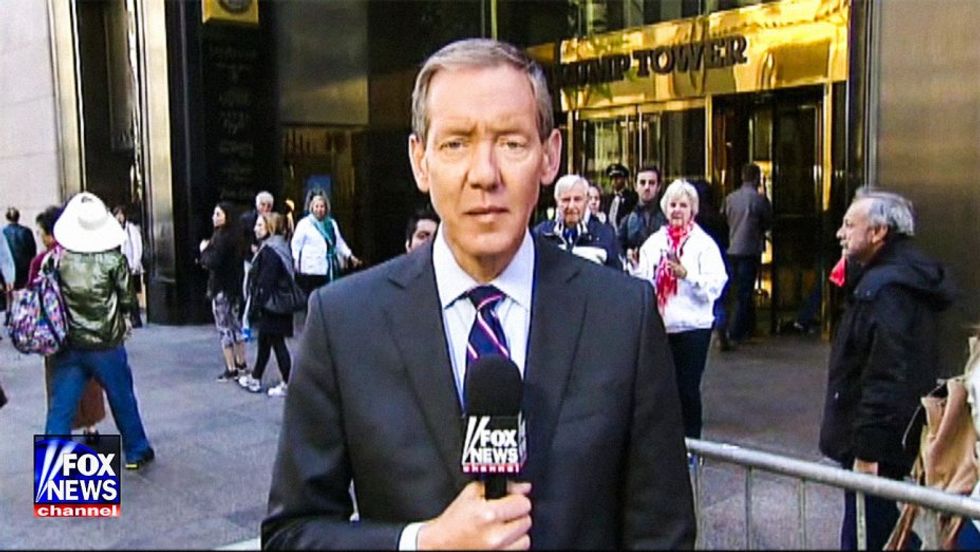 In a series of exclusive interviews with ThinkProgress, former Fox News Channel chief political correspondent Carl Cameron explained how Russian operatives, with the help of the Trump campaign, orchestrated a cyber attack on the 2016 presidential election.

“Trump confidant Roger Stone’s success was having the connections and creating the opportunities for [Russian intelligence officer] Guccifer2.0 and other Russian groups to really start taking advantage of social media and pounding these negative memes that Hillary’s a crook, et cetera,” Cameron told ThinkProgress’ Joe Romm.

According to Cameron, getting Donald Trump elected had been a major goal for Stone, who pushed him to run for office for many years, and worked on Trump's failed bid with the Reform Party in 2000. He also worked on Trump's campaign in 2015 before transitioning to a more informal role.

It was Stone who helped Guccifer2.0 spread propaganda and misleading news stories to undermine the candidacy of Hillary Clinton. Guccifer2.0 took credit for the infamous hacking of the Democratic National Committee systems, as well as accounts of other political party members and organizations.

Stone has continued to deny allegations of collusion with Russia, but Cameron says it’s important to know that Roger’s entire career was based on doing dirty tricks. He boasted about it from the time he was in college until today.”

Stone previously claimed to have communicated indirectly with WikiLeaks prior to the website’s publication of emails stolen by Russian agents. That connection to Wikileaks informed claims Stone made asserting that Wikileaks founder Julian Assange had “devastating” information about “Clinton Foundation scandals" during an appearance on Alex Jones's InfoWars radio show.

“I think Julian Assange has that proof and I think he is going to furnish it for the American people," Stone said at the time.

The timeline gets interesting from there:

Emails obtained by The Wall Street Journal last month indicate Stone withheld documents from the House Intelligence Committee that showed he lied about his communications with a conservative radio host whom he viewed as a back channel to Wikileaks during the presidential campaign. In mid-September 2016, Stone emailed Randy Credico, the radio host, writing, “Please ask Assange for any State or HRC e-mail from August 10 to August 30 — particularly on August 20, 2011.”

That request contradicts Stone's September 2017 testimony before the Committee. At the time, Stone claimed that he “merely wanted confirmation” from Credico that Assange had information about Clinton.

But Credico's response to Stone's request––"“That batch probably coming out in the next drop… I can’t ask them favors every other day. I asked one of his lawyers… they have major legal headaches right now..relax.”––confirms that Credico was indeed a back channel to Wikileaks.

Stone tweeted the following on October 1, “Wednesday@HillaryClinton is done. #WikiLeaks.”

Two days later, he tweeted: “I have total confidence that @wikileaks and my hero Julian Assange will educate the American people soon #LockHerUp.”

John Podesta's emails became public on October 7, one hour after Trump's infamous Access Hollywood tape, in which he bragged about sexual assault, became public. As ThinkProgress notes, Podesta's emails "became a key part of the narrative used to drown out the negative attention Trump’s remarks were getting with a deluge of social media alternative story lines."

Podesta's emails also gave Trump plenty of ammunition to use against Clinton: He would bring up the emails on many occasions between October 10 to election day in tweets, debates, and media appearances around the country.

“Boy, that WikiLeaks has done a job on her, hasn’t it?” Trump said at one point.

The reveal of Podesta's emails were widely seen as a boon for Trump from the Russians, whom he asked for help to expose Clinton's emails.

"Russia, if you’re listening, I hope you’re able to find the 30,000 emails that are missing. I think you will probably be rewarded mightily by our press,” Trump said on July 29.

Hours after that statement, he tweeted the following:

If Russia or any other country or person has Hillary Clinton's 33,000 illegally deleted emails, perhaps they should share them with the FBI!
— Donald J. Trump (@Donald J. Trump) 1469636162.0

Cameron explains that all of these events were primed to create opportunities for Russian intelligence and Russian trolls to affect the election outcome. "Viralizing" the Clinton narrative helped "suppress the vote for her." This, in turn, caused many supporters of Bernie Sanders to refuse to vote for Clinton––or vote for Trump outright––despite Sanders' endorsement after losing the DNC's nomination.

And then, of course, there's Cambridge Analytica, a firm the Trump campaign hired to develop persuasive messaging designed to get out the vote. The company's database was massive––containing data from more than 10 million persuadable voters.

A New York Times investigation earlier this spring revealed that much of the information Cambridge Analytica used to target these voters, which included demographic information and psychological profiles developed from Facebook, was obtained fraudulently.

Cambridge Analytica, which had been backed by billionaire conservative donor Robert Mercer and had former Trump strategist Steve Bannon on its board, was already under investigation by special counsel Robert Mueller for possible connections to Russian interference in the election.

The Trump campaign paid the company millions of dollars in the closing months of the campaign. But they were worth the price, Cameron explained to ThinkProgress — according to the senior campaign officials he spoke to at the time.

The campaign knew Trump was behind in the key states of North Carolina, Pennsylvania, Wisconsin, and Michigan with over two months to go, but they were not able to budge the numbers despite all of Trump’s efforts, including repeated campaign visits. Too many voters simply didn’t like Trump.

But with the help of Cambridge Analytica’s voter profiling, the campaign could identify a core group of voters who didn’t much like either Trump or Clinton, particularly blue-collar voters, and micro-target them with tailor-made anti-Clinton messages aimed at swinging some toward Trump and depressing the vote of the rest. Cameron said the senior people in the campaign believe this final push made the difference.