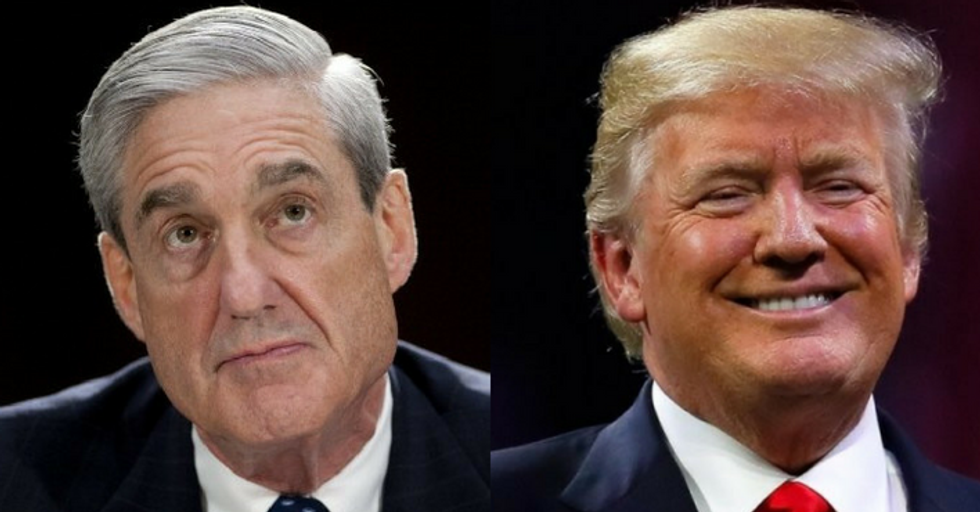 Since then, Mueller and his team of prosecutors from the DoJ—who Trump always refers to as "Angry Dems" or "Angry Democrats" despite their actual political affiliation being unknown to the public—frequently feature in the President's Twitter attacks.

On Monday, Trump accused them of attempting to sway the 2018 midterm elections slated for Tuesday, November 6, 2018, in two early morning tweets. Trump stated:

"Disgraced and discredited Bob Mueller and his whole group of Angry Democrat Thugs spent over 30 hours with the White House Councel[sic], only with my approval, for purposes of transparency. Anybody needing that much time when they know there is no Russian Collusion is just someone........looking for trouble. They are enjoying ruining people’s lives and REFUSE to look at the real corruption on the Democrat side - the lies, the firings, the deleted Emails and soooo much more! Mueller’s Angry Dems are looking to impact the election. They are a National Disgrace!"

The accusation struck people's sense of irony for two reasons.

The first most immediately obvious reason involves the purpose of the DoJ opening an investigation and eventually appointing a Special Counsel to head that investigation—to keep it free from pressure or interference from within the DoJ or the White House. Through a series of now substantiated and proven actions, Russia attempted to interfere in the 2016 presidential election and continues to try to interfere and influence world politics mainly through cyber attacks and secret private meetings with foreign government officials or members of candidate's families.

But the second point—given it relates to events almost two years ago—escaped many people's notice.

Back in October of 2016, just about 10 days before what would prove to be a very close presidential election—where Democrat Hillary Clinton won the popular vote by over 3 million votes but Republican Donald Trump won the electoral vote—then Republican Director of the FBI, James Comey, publicly announced the investigation into Hillary Clinton's private email server would be reopened.

Reactions to the announcement were mixed, but then candidate Trump's response was clear as shown in the following tweets.

Many viewed the unusual public announcement by Comey as a deliberate attempt to interfere in the 2016 presidential election. In July of 2016, Comey defended his announcement of the investigation's conclusion with no charges to be filed or criminal wrongdoing found.

"@FoxNews: .@JamesRosenFNC: "Never before has a president endorsed someone under investigation by @TheJusticeDept." https://t.co/fX5bs8fzac
— Donald J. Trump (@Donald J. Trump) 1465561201.0

But that July announcement did not stop Clinton opponents across the political spectrum from proclaiming Clinton guilty of a crime the FBI and DoJ exonerated her of. Trump still led "lock her up" chants at his rallies. He never stopped leading those chants.

When Comey made his public statement in October, just before the election, candidate Trump not only failed to have an issue with Comey's public announcement of a reopened investigation—that eventually also led to no charges against Clinton—he amplified the message on Twitter.

We are now leading in many polls, and many of these were taken before the criminal investigation announcement on Friday - great in states!
— Donald J. Trump (@Donald J. Trump) 1477835706.0

Criminal investigations led by duly appointed Republican officials appear to only bother Trump when they implicate the President or members of his campaign staff or administration or family.