Rep. Steve King Just Said He Agrees With the House Resolution Censuring Him for His Recent Remarks About 'White Supremacy' 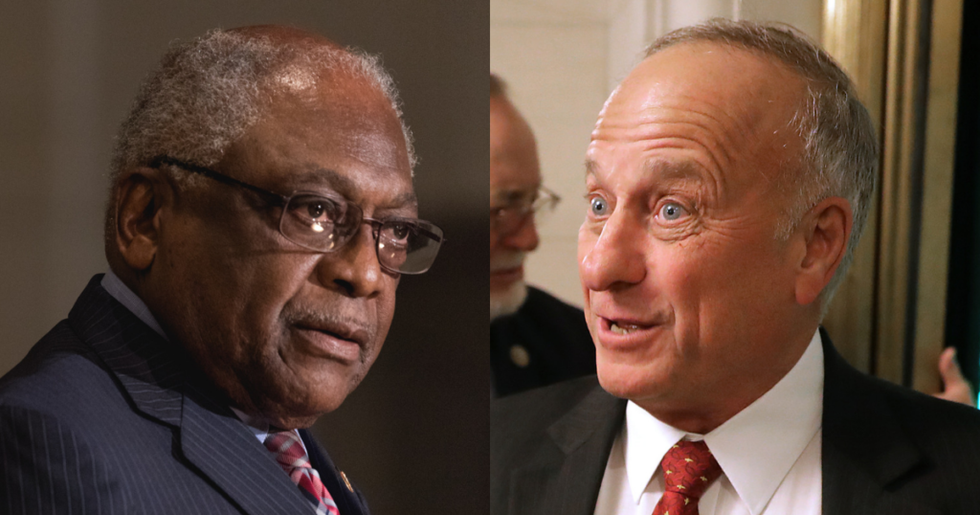 Congressman Steve King (R-IA), under fire in recent days for asking why white supremacy is bad, announced Tuesday that he supports a House measure condemning his remarks. The measure passed in the House 424-1.

"White nationalist, white supremacist, Western civilization – how did that language become offensive?” King said in a The New York Times interview last week.“Why did I sit in classes teaching me about the merits of our history and our civilization?”

King was stripped of his committee seats on Monday as the fallout from the Times interview spread.

House Majority Whip Jim Clyburn (D-SC), a civil rights leader, drafted the resolution reprimanding King. Titled "Rejecting White nationalism and White supremacy," the resolution singled out King's "hateful expressions of intolerance that are contradictory to the values that define the people of the United States."

“Now is the time to do right,’’ Clyburn said. “This body must speak out against this evil.”

Clyburn was joined by House Minority Leader Kevin McCarthy (R-CA), who said Tuesday that "House Republicans denounce his language. We do not believe in his language and we’ve decided that he will not serve on any" committees.

King urged his colleagues to support Clyburn's resolution... but only after referring to criticism of his language as an "unprecedented assault" on his freedom of speech.

"I regret that we are in this place," King said on the House floor Tuesday afternoon. "I agree with every word that you have put in this. It's an honest and a direct resolution put together to address a subject that has been too long before the public dialogue in this country."

He added: "I want to ask my colleagues on both sides of the aisle, let's vote for this resolution. I'm putting up a yes on the board here."

@cspan This is not the first time Steve King has made these kinds of comments he believes he can get away with that… https://t.co/D0be1VBvZq
— Natalie (@Natalie) 1547581558.0

King's track record is peppered with instances of racial animus.

In 2013 for example, he infamously said that immigrants crossing the border have "calves the size cantaloupes" and are "undermining our culture and civilization."

While condemning himself, King on Tuesday alluded to his family history, which he claimed was part of the abolitionist movement.

Thus, there is little sympathy for King or the people who reelected him in 2018 to an eighth term in Congress.

@jaketapper @SteveKingIA Lol. King and the voters of his district now have to deal with the consequences of support… https://t.co/URHrr9q0ZA
— Jennifer Post (@Jennifer Post) 1547580315.0

There is even a Confederate Flag on King's desk.

At least one Republican has tried to stop King from saying racist things. Congressman Dave Joyce (R-OH) said he had a "man to man" conversation with King in 2013 following the cantaloupe comments.

“My point was that when you say stupid things, it splashes on all of us,” Joyce said. “He said, well, he gets good publicity out of it. I said, ‘Well you need to think about other people here because it’s not right. I can’t believe you say these things, but it’s not right and you shouldn’t say those things.’"