When This Fish Looks In The Mirror, It Recognizes Itself, and That's a Very Big Deal 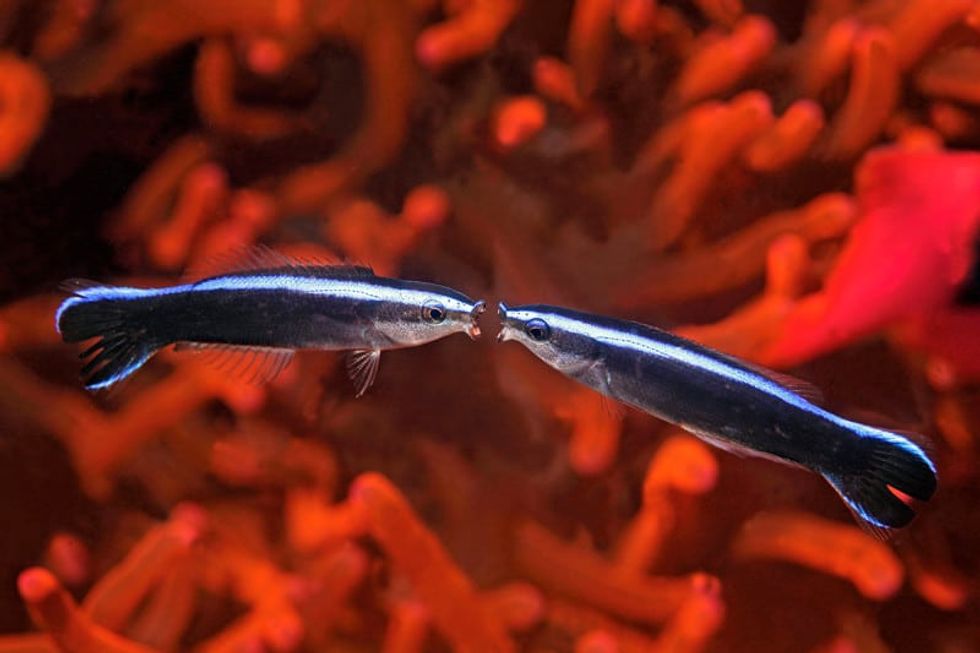 Animals’ ability to recognize themselves in a mirror — long considered the ultimate test of self-awareness — has historically been limited to great apes like chimpanzees and, more recently, young dolphins. However, an international group of researchers working in Japan recently tried “the mirror test,” as it’s known, with fish, and the results were shocking.

In other words, the scientists believe a small, tropical fish called the cleaner wrasse — and, by extension, potentially other species of fish — was able to recognize that the image presented in a mirror was itself, and not another fish.

The experiment, published in bioRXiv in late August, involved 10 wild-caught cleaner wrasses, each of which was placed in an individual tank outfitted with a mirror. At first the fish attempted to fight with the image in the mirror, but over time they began approaching the mirror and appearing to “dance.” The researchers then placed a dot of colored gel on eight of the fish heads, in hopes they would exhibit some behavior that indicated they knew something different was on their bodies. And, sure enough, seven of the eight were observed angling their heads in a way to look at the mark, and in some cases even trying to scrape it off.

“This is the first report of successful passing of the mark test in vertebrates outside of mammals and birds,” the scientists wrote in the report.

However, the extent of fish intelligence is still largely unknown, and as New Scientist reports, Gordon Gallup of the University of Albany, New York, who himself invented the mirror self-recognition test (MSR), is dubious that the creatures are actually “recognizing” themselves in the mirror. Because they are cleaner fish, which by definition feed exclusively off parasites they find on larger species, they “probably mistook the marks on their skin for parasites on the skin of other fish,” according to Gallup.

Gallup, a psychologist, first began using the MSR test in the 1970s while working with chimpanzees. Since then, in addition to great apes and bottlenose dolphins, orca whales, Eurasian magpies and even ants have passed either the standard MSR or a modified version.

The cleaner wrasse discovery is only the latest experiment designed to investigate fish intelligence; in 2009, researchers at Israel’s Technion Institute of Technology found that goldfish can remember crucial information such as food cues for up to five months.

“There is a lot of evidence now that fish are no dumber than birds or many mammals—and in many cases they are just as intelligent,” researcher Dr. Mike Webster said at the time. “Many fishes—such as minnows, sticklebacks and guppies—are capable of the same intellectual feats as, for example, rats or mice. They can learn their way around mazes, they can learn to recognise other fish, and they can remember which individuals are better competitors.”

It’s enough to make one reconsider that tuna sandwich for lunch.