Vertical Underwater Sea Farming Could Be Our Salvation 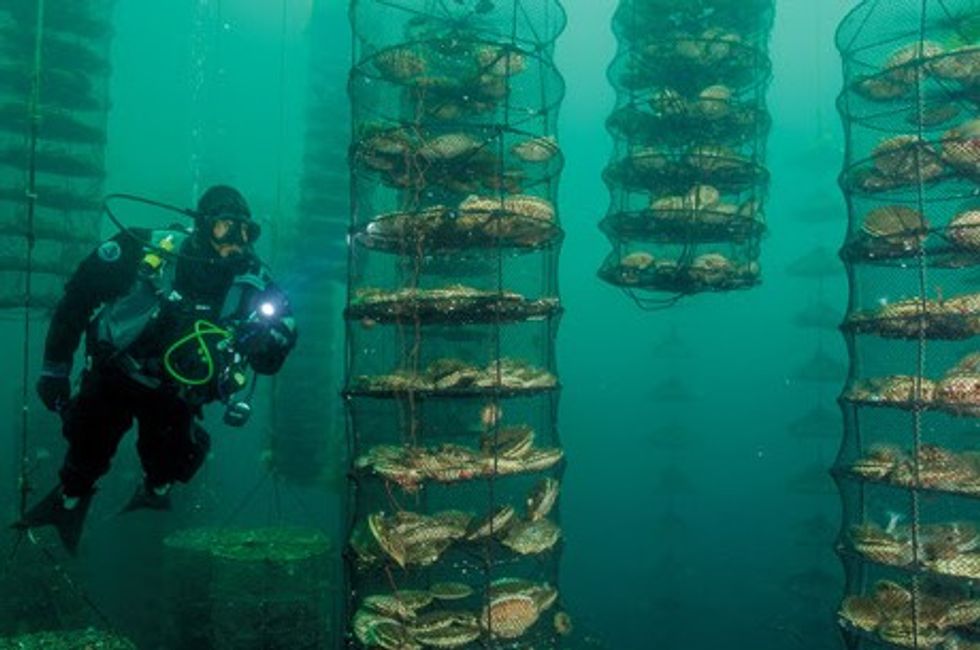 Quoting Jacques Cousteau, “We must plant the sea…using the sea as farmers instead of hunters. That is what civilization is all about—farming replacing hunting," Bren Smith reveals how his award-winning three-dimensional ocean farm can produce 30 tons of sea vegetables and 250,000 shellfish per acre every five months. It also boosts biodiversity by providing protected habitat for other fish and creates interesting dive sites for recreational scuba divers. The only parts of the farm visible from land are a few buoys.

"We can’t continue eating fish – our last wild, staple food – at its current rate. Climate change is altering ocean habitats by warming seawater, and the increased carbon in the oceans is making the water more acidic, so many fish stocks are falling," Smith writes, describing the future of hunting for fish. "Couple that with overfishing and we could be looking at entire populations being wiped out." A self-described “high school dropout” who has fished the world's oceans for 30 years, Smith is now helping other fishermen go from hunter to farmer with a farm in the ocean.

Sustainability of the oceans is of vital importance for the approximately three billion people in the world who rely on both wild-caught and farmed seafood as their primary source of protein.

Smith's ocean farm utilizes the whole coastal water column, from the top of the wave’s surface to the ocean bottom, producing tons of food in a relatively small area. Thimble Island Ocean Farm, Smith's original farm in Connecticut is about 18 feet from the ocean surface to the ocean floor. The ocean farming model can work in any part of the ocean where the water is nine to 75 feet deep.

Smith created a non-profit organization, GreenWave a year and a half ago. Since then, GreenWave has helped 12 farmers adopt the model in the Northeastern US. These are not franchises. Smith, who has 25 more ocean farms in the works, helps to set up and offers

ongoing support to new ocean farms. Smith hopes to help create as many as 100 farms in the region in the next five years. He is talking to fishermen from every coastal state as well as in 20 countries.

Since there is no need for fresh water, fertilizer or pesticides, restorative ocean farming is the most sustainable form of food production on the planet. Seaweed, particularly sugar kelp, and mussels are grown on ropes hanging in the water above oyster and clam cages. Nutritionally, ocean plants like seaweeds are just as healthy as and often healthier than land-grown foods. And oysters and clams are a source of lean protein that grows quickly.

Seaweed farms produce more than 25 million metric tons of sea vegetables a year. The value of the seaweed produced worldwide was $6.4 billion dollars in 2014. Today more seaweed is produced than lemons and limes. Seaweed demand is rising for use in human food, animal feed, and cosmetics.

Describing kelp as one of the world’s fastest growing plants, Smith explains how it helps the environment. It can absorb large quantities of carbon from the atmosphere, making it the perfect crop for helping to mitigate climate change.

Ocean farmers need a cheap but strong underwater infrastructure and a place in the ocean to put it. The farmer can easily tend the farm from a boat. Planting the farm consists of introducing kelp seedlings and tiny oysters, clams and mussels into the infrastructure.

The shellfish grow by filtering nutrients out of the water. Each oyster can filter 50 gallons of water a day. Many aquatic ecosystems suffer from excessive nitrogen, mostly from fertilizer from industrial farms. Shellfish pull that nitrogen out of the water. And the ocean farmers

are not catching much fish, so vertical farms become artificial reefs, havens for hundreds of other fish species. Finally, the ocean farms framework is robust yet flexible, which protects the coastline from storm surges.

GreenWave is creating a new way of harvesting food from the ocean and this year they won the Sustainia award in Denmark. Smith enjoyed the ceremony in Copenhagen. "I got to eat incredible food prepared by René Redzepi, a chef with two Michelin stars. The 20-course meal was almost completely made up of shellfish and seaweeds. It’s up to chefs to make ocean-farmed foods delicious, that’s what will drive people’s dietary acceptance of sea plants and animals. We do climate farming; they need to do climate cuisine. Perhaps we can make kelp the new kale."

Smith explained, “My goal is to rearrange the seafood plate, moving sea vegetables and bivalves to the centre and fish to the edge as something to be savoured occasionally. Fish should be a treat. There are thousands of edible ocean plants and hundreds of shellfish species to explore.”