Trump's son-in-law appears to be Mueller's latest target in the Russia probe. 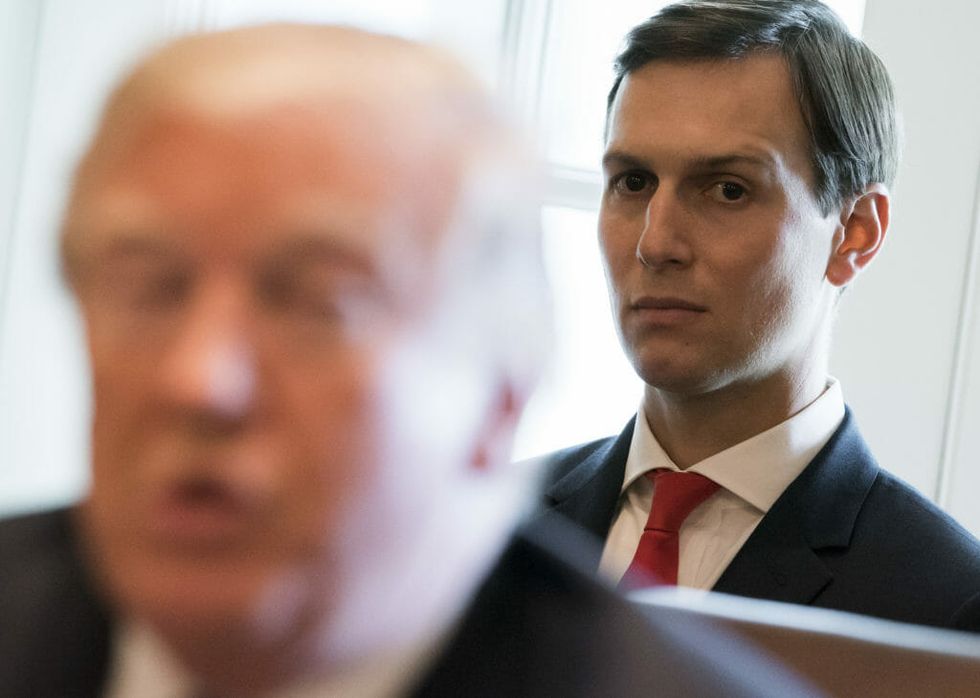 US President Donald Trump speaks alongside his Senior White House Adviser Jared Kushner (R) during a Cabinet Meeting in the Cabinet Room of the White House in Washington, DC, October 16, 2017. (SAUL LOEB/AFP/Getty Images)

Jared Kushner, President Donald Trump's son-in-law and senior adviser, is under even more scrutiny as part of Special Counsel Robert Mueller's investigation into Russian collusion. Mueller's team has begun to question witnesses about some of Kushner's conversations and meetings with foreign leaders during the transition.

Kushner has come under fire ever since a report surfaced that he met with both Sergey Kislyak, then the Russian ambassador to the United States, and Sergey Gorkov, the head of a state-owned Russian development bank, to discuss issues including sanctions. During his meeting with Kislyak, he purportedly suggested establishing a secure communications line between Trump officials and the Kremlin at a Russian diplomatic facility. Reports suggest that Mueller has set his sights on this meeting in particular.

Additionally, Mueller's team has inquired about:

Former federal prosecutor Renato Mariotti, who recently weighed in on Mueller's request for documents related to Attorney General Jeff Sessions' recusal from the Russia probe, He believes this latest development provides further proof that the president is under investigation.

@WSJ 4/ This is further evidence that Trump himself is under investigation, despite suggestions to the contrary. Tr… https://t.co/7lVJ2rD2uW
— Renato Mariotti (@Renato Mariotti) 1511315639.0

As if to highlight Mariotti's point, several outlets––including Newsweek, The Hill, and Vanity Fair––have reported that Kushner is concerned about the reach of Mueller's probe, reportedly asking a friend, "Do you think they'll get the president?"

Kushner has also sought to distance himself from a bombshell report that the president’s son, Donald Trump Jr., revealed that he met with a Russian lawyer during the presidential campaign. An intermediary for the lawyer promised damaging information about Hillary Clinton, the Democratic opponent. Trump Jr.’s emails contradict months of denials by the Trump administration of any collusion with Russian operatives. Kushner describes attending the meeting, noting that he arrived late and that when he got there, the Russian lawyer was discussing a ban on U.S. adoptions of Russian children.

Last week, Kushner became the subject of even more criticism after the Senate Judiciary Committee found he forwarded emails about a "Russian backdoor overture and dinner invite" to Trump campaign officials and did not turn these emails over to lawmakers as part of the Russia probe.

Despite Kushner's backpedaling, "such meetings have only added to accusations of collusion between the Trump campaign and Russia to prop up Trump and keep Democrat Hillary Clinton from the nation’s top executive post," as Newsweek notes, and President Trump reportedly blames Kushner for the escalating investigation.