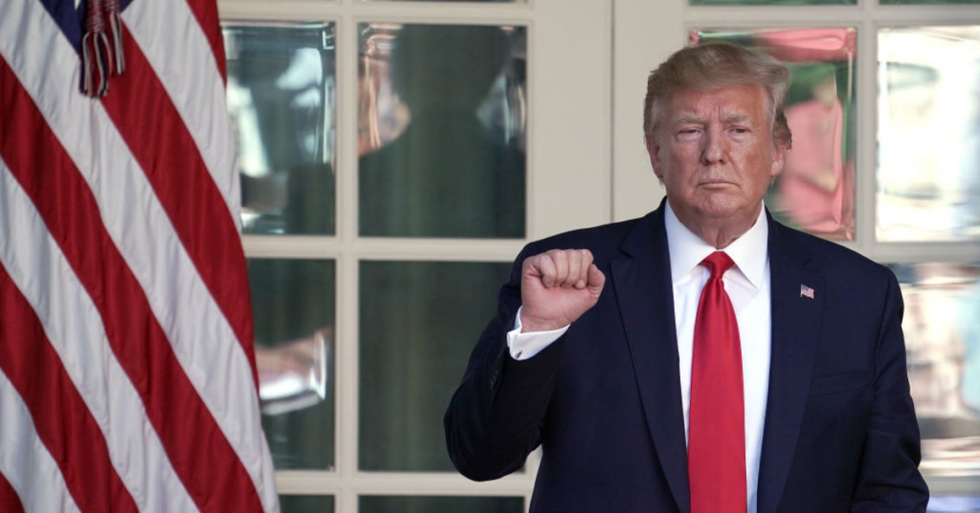 President Donald Trump heads back to the Oval Office after attending an event establishing the U.S. Space Command, the sixth national armed service, in the Rose Garden at the White House August 29, 2019 in Washington, DC. (Photo by Chip Somodevilla/Getty Images)

In another effort to fund his campaign promise of a Mexican financed border wall, President Donald Trump's newly appointed Secretary of Defense Mark Esper pulled funds from the Pentagon's construction budget. Federal budget law restricts the movement of appropriated funds within a federal agency and from one agency to another without congressional approval.

The projects being defunded include repairs to hurricane-damaged military installations in Puerto Rico and the Virgin Islands, repairs to schools for military dependents, upgrades to heating and cooling systems, practice ranges and security upgrades. The projects cover 23 U.S. states, three U.S. territories and 20 countries.

The decision means the Pentagon can pull funding from as many as 127 planned construction projects that had been ap… https://t.co/yC619o9jIX
— Stars and Stripes (@Stars and Stripes) 1567591960.0

The DoD announcement refers to the projects as deferred, but unless Congress approves adding another $3.6 billion to backfill the Pentagon budget, the projects are effectively canceled, and members of Congress are making their grievances known.

@realDonaldTrump It is a slap in the face to the members of the Armed Forces who serve our country that… https://t.co/6MMFrPPUTX
— Chuck Schumer (@Chuck Schumer) 1567547574.0

Congress was not alone in their outrage.

@SenSchumer @JackiMGittos @realDonaldTrump Those funds were appropriated bY CONGRESS for the sole purpose of the M… https://t.co/hbX4B4EipI
— Tom Rowe (@Tom Rowe) 1567554938.0

@ZcohenCNN The wall was supposed to be an election talking point that Mexico was going to pay for. Now we are willi… https://t.co/gw2KjfCRom
— Lovina Box (@Lovina Box) 1567567603.0

Esper—who was one of three men who served as acting Secretary for 202 days after James Mattis resigned over disagreements with the Trump administration—deemed Trump's border wall was "necessary to support the troops" Trump deployed to the border.

In addition to the $3.6 billion being siphoned from military construction projects, Trump is also taking $2.5 billion from the Pentagon budget citing a drug intervention law—10 USC 284. What military projects those diverted funds will kill was not part of the Pentagon briefing.

Democrats, government ethics watchdogs and some Republicans criticized Trump's manipulation of circumstances to activate laws intended for real emergencies to bypass the constitutional separation of powers and checks and balances.

@ZcohenCNN This is a slush fund for Trump & his campaign donors. Republicans better prepare for the next Democrat P… https://t.co/BtOhXanewg
— Joemomma (@Joemomma) 1567560606.0

Under the Constitution, Congress controls appropriated fund allocations. Even conservative critics state Trump's actions open up the possibility for all future Presidents to use emergency declarations and military deployment to fund anything not approved by Congress.

Congress is currently in recess. The Senate and House return on Monday, September 9.

Whether they address the Defense Secretary's diversion of funds remains to be seen.