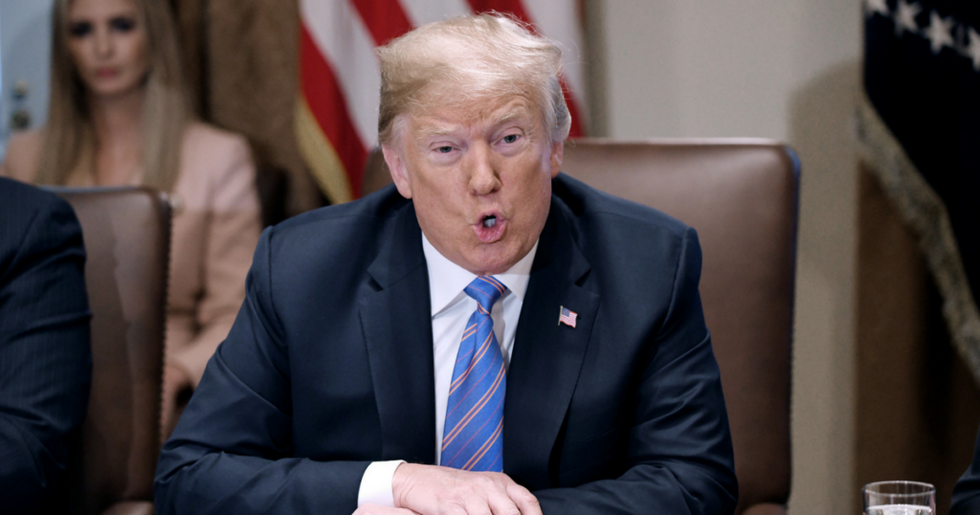 In a letter addressed to House Speaker Paul Ryan, President Donald Trump announced he is canceling a pay raise that most civilian federal employees were due to receive in January. The president cited budgetary constraints.

"Under current law, locality pay increases averaging 25.70 percent, costing $25 billion, would go into effect in January 2019, in addition to a 2.01 percent across-the-board increase for the base General Schedule. We must maintain efforts to put our Nation on a fiscally sustainable course, and Federal agency budgets cannot sustain such increases," the president's letter read in part.

The president added that he’s determined that for 2019 “both across-the-board pay increases and locality pay increases will be set at zero.”

The president's critics say his reasons for the cancellation are disingenuous. Bloomberg reporter Sahil Kapur noted that, by contrast, the president's tax plan, per a report from the Congressional Budget Office, is projected to cost the Treasury "an average of $190 billion each year for the next decade."

Former U.S. Attorney General Eric Holder also weighed in and wondered how much the president benefited from his own tax proposal.

Trump decides no raises for federal employees. What about your trillion dollar tax cut for corporations and your f… https://t.co/uAdN3C3V5H
— Eric Holder (@Eric Holder) 1535654354.0

The president was also heavily criticized by progressive military advocacy organization VoteVets. In a statement, Will Fischer, an Iraq War veteran and VoteVet's Director of Government Outreach, called the move "simply obscene."

"Our hard-working veterans sacrificed for this country, and at a time when wages are stagnant and inflation is on the horizon, it is simply cruel to cancel that so many of these veterans in the workforce were depending on," he said.

“It is simply obscene that the same person who gave away massive amounts of money to corporations and billionaires… https://t.co/KMngwW03gf
— VoteVets (@VoteVets) 1535651144.0

Jordan Uhl, the political commentator and host of the podcast "Rust Belt to Beltway," pointed out that the decision to cancel a federal pay raise is an audacious one, particularly for a president who has taken so many vacations that the Secret Service is concerned it will run out of money.

Trump is burning through millions in taxpayer dollars on personal vacations and has the audacity to suggest that fe… https://t.co/yrJCUDABHt
— jordan (@jordan) 1535651768.0

In May, the Trump administration proposed $143.5 billion in cuts to federal employee compensation, which included a significant decrease in retirement funding. The president also signed executive orders which made it easier to fire civilian employees and cut down on union activity. On Saturday, a federal judge invalidated many of the provisions of those executive orders.

There has already been concern that Trump's decision could imperil the re-election of Representative Barbara Comstock (R-VA), whose district is home to tens of thousands of government employees. Comstock has not commented on the announcement.

There was a three-year pay freeze from 2011 through 2013 under President Barack Obama, which Congress authorized. Obama attempted to end the freeze in 2012 through an executive order but lawmakers overturned it through legislation and the president signed. Lawmakers had extended the freeze to avoid a government shutdown.

The president has often claimed that he and his administration will reduce the federal deficit. However, his policies have proven to have the opposite effect.

For example, the Trump administration has also come under fire for last month's decision to provide upward of $12 billion in emergency aid for the agriculture industry and the farmers––many of whom voted for the president––who’ve been impacted the hardest by his tariffs.

Agriculture groups and lawmakers contend that the administration’s tariffs have prompted U.S. trading partners to retaliate by imposing tariffs of their own on products like pork and soybeans.

Many believe the president doesn't actually understand what tariffs are and how they operate, citing the following tweet he issued last month, in which proclaimed: "Tariffs are the greatest!"

Trump’s tweet comes as the U.S. and China spar tensely after Trump announced an additional $200 billion in tariffs on Chinese goods, in an attempt to get businesses to use less Chinese-produced goods and opt for goods made in the U.S. or by allies with whom the country has less precarious trade relationships.

Trump’s tariffs also focus on intermediary goods, or parts, which many small-to-medium-sized U.S. businesses use to make finished products. Consequently, the increased cost of parts place businesses into positions where they must either raise prices on their goods and pass the cost on to the consumer, reduce their workforce, or shutter U.S. operations and move overseas to avoid tariffs.