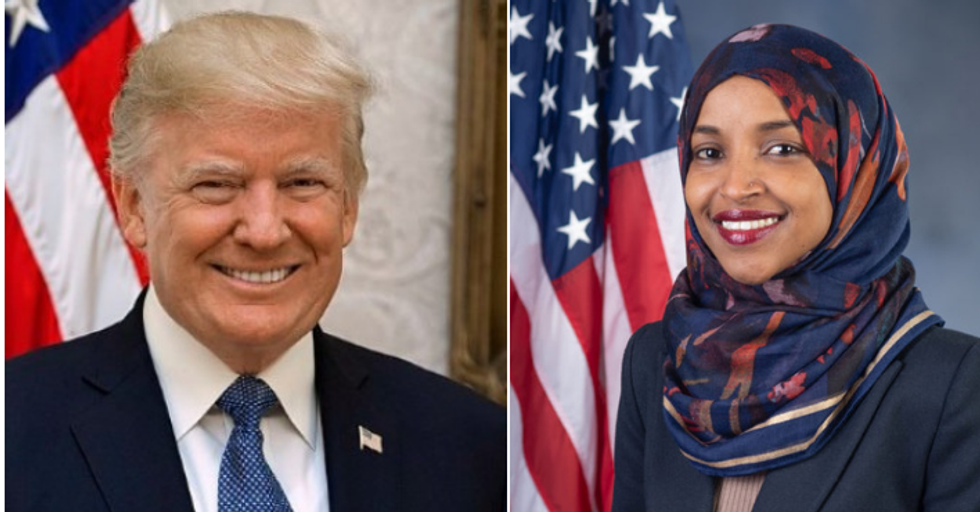 After the release of the Mueller report, President Donald Trump took to his favorite form of communication to plead his case to the masses.

The President shared several videos as well as a strange two word tweet.

Though it is unclear what Trump was referring to, someone featured in another Trump Twitter video had a perfect response to the cryptic tweet.

"No thanks, just lived through one!"

And Representative Omar was not the only one to interpret Trump's two word tweet.

“Presidential harassment” is when an obnoxious reality TV star claims over and over again that the first black Pres… https://t.co/kZHZv5wi88
— David Cicilline (@David Cicilline) 1555591646.0

Others gave lists of who President Trump harassed.

And I quote “grab them by the pussy” but sure dude, presidential harassment https://t.co/IgwpA5tzFG
— Daniel Lincoln (@Daniel Lincoln) 1555602994.0

@realDonaldTrump Wouldn't one have to first be "presidential" to claim presidential harassment?
— Larry (@Larry) 1555681660.0

As well as many comments on the topic.

@realDonaldTrump It's not presidential harassment when you tell people around you to lie. If he was a CEO he would… https://t.co/SR5DffQnYN
— Bob austin (@Bob austin) 1555673512.0

@realDonaldTrump That “presidential harassment” to which you’re referring is called checks and balances. Deal with… https://t.co/WmLk4ZjJpT
— Miranda Yaver (@Miranda Yaver) 1555589287.0

@realDonaldTrump Yes you exercise this abuse of power "PRESIDENTIAL HARASSMENT" excessively. History will measure you it always does!
— Scott Volkers (@Scott Volkers) 1555661574.0

@realDonaldTrump Presidential harassment? Scrutiny of a presidents actions while in office should be welcomed in a… https://t.co/fgnLKmWseB
— Sean Sweet (@Sean Sweet) 1555656750.0

President Trump often employs simplistic catchphrases and rhetoric for his base. Indeed, in addition to "lock her up," "build the wall" and "MAGA," many of Trump's ardent supporters immediately adopted his latest, tweeting about supposed presidential harassment.

So while most of Twitter scratches their heads over the tweet, the intended audience got the message loud and clear.