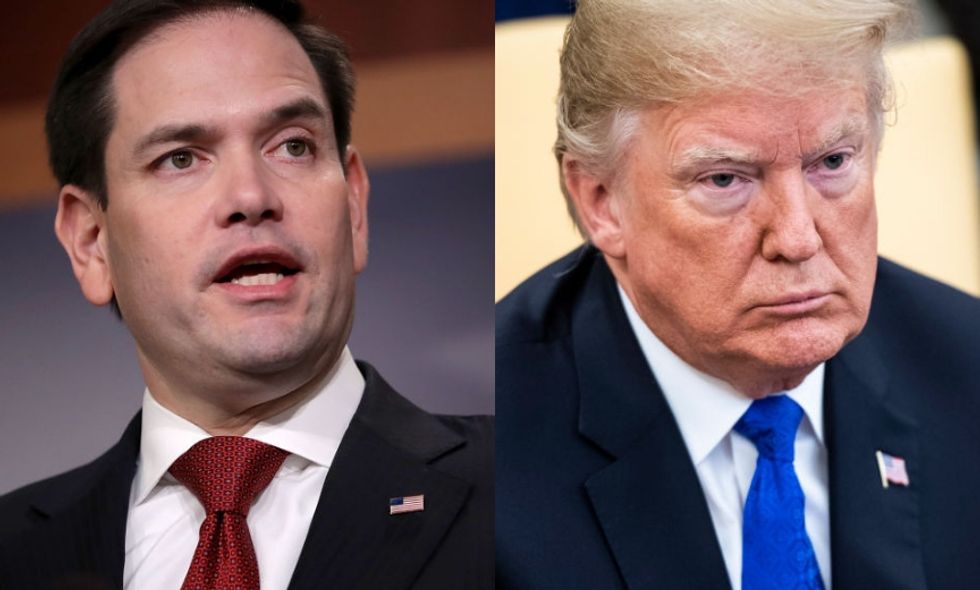 President Donald Trump received widespread outcry from many members of his own party after he blindsided officials by announcing a withdrawal of the 2,000 American troops in Syria, defying advisors and defense officials. Trump cited the defeat of ISIS as his reason for leaving (defense experts insist that ISIS isn't totally defeated).

Senator Marco Rubio (R-FL) joined the chorus of Republican voices against the move, calling it a "colossal mistake" and saying "Today’s decision will lead to grave consequences in the months and years to come.”

However, on Twitter, Rubio pointed out one entity that's applauding Trump's decision: Russia.

The presence of American troops in Syria has kept Russian and Iranian interference in the ongoing civil war in check. The two countries back Syrian President Bashar al-Assad, who is infamous for his human rights abuses toward his own people.

For his part, Rubio has been one of Donald Trump's most faithful defenders. That may be why Rubio's tweet didn't inspire too much confidence.

Some shadily reminded Rubio that he's a Senator and in a position to bolster his sentiments with actions.

Rubio has long dismissed the investigation of Special Counsel Robert Mueller into possible conspiracy between Russia and the Trump campaign.

Rubio's tweet pointing out Russia's interest in troop withdrawal from Syria led to many people pointing out Trump's subservience to the Kremlin.

@marcorubio @Prof_Tweeper And? What is your plan for responding to this? What more evidence do you and your party n… https://t.co/xEyecnpAmc
— Martha was right (@Martha was right) 1545277523.0

@marcorubio @gtconway3d Question to Putin: Did you want Trump to win the election & did you direct any of your o… https://t.co/eQ9pCKMlcZ
— ☇RiotWomenn☇ (@☇RiotWomenn☇) 1545308450.0

While Rubio may finally be standing up to Trump, the command of his constituents remains: Do something.