Donald Trump Now Claims He Confronted Vladimir Putin Over Election Meddling During Their Meeting, and the Internet Can't Even

Yeah, no one believes that. 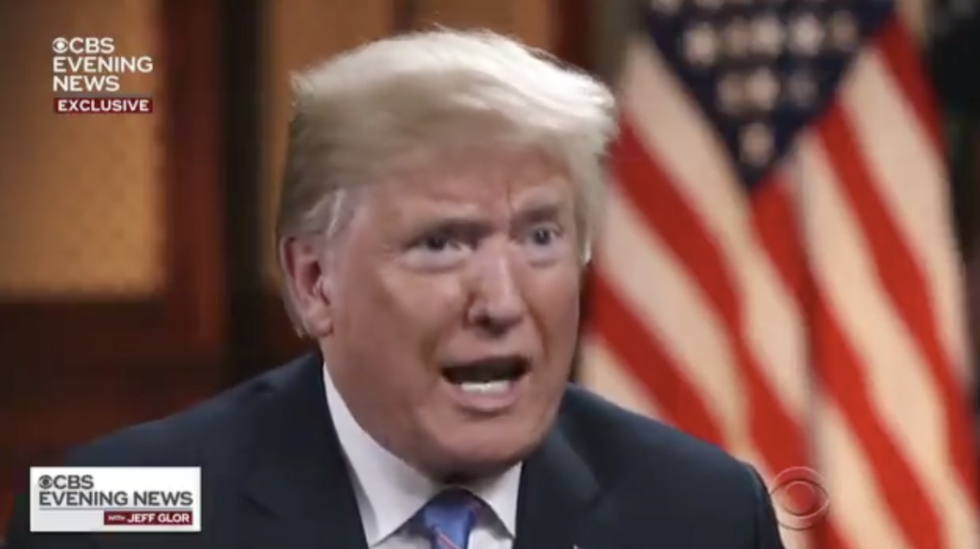 After days of publicly questioning the U.S. Intelligence community's assessment that Russia was responsible for interference in our 2016 election, President Donald Trump took to CBS News on Wednesday to insist that he does hold Russia responsible for meddling and now claims that he talked tough with Putin about it when they met.

In an interview on CBS's Evening News, Trump told Jeff Glor he "let him [Putin] know we can't have this, we're not going to have it, and that's the way it's going to be."

Below is a transcript of the interview, in which the president claims to have challenged Putin's denial of Russia's interference in our election.

It should be noted that Trump's version of events cannot be verified because notetakers were not invited to accompany either leader. Only translators for Trump and Putin were permitted to attend the meeting.

GLOR: "You say you agree with U.S. intelligence that Russia meddled in the election in 2016."

TRUMP: "Yeah and I've said that before, Jeff. I have said that numerous times before, and I would say that is true, yeah."

GLOR:  "But you haven't condemned Putin, specifically. Do you hold him personally responsible?"

TRUMP: "Well, I would, because he's in charge of the country. Just like I consider myself to be responsible for things that happen in this country. So certainly as the leader of a country you would have to hold him responsible, yes."

"They're laughing at you on every news show in Russia...Putin thinks you're an idiot."

"Trump badmouths everyone but Putin," one user stated.

No one is forgetting that Trump urged Russia to hack the DNC in July 2016, which they subsequently did the very same day.

When pressed over whether he believes Putin is lying to him, Trump said: "I don't want to get into whether or not he's lying."

This too was met with fierce blowback on social media.

@kylegriffin1 TRUMP: "I don't want to get into whether or not he's lying." He has called SOMEONE/SOMETHING a liar… https://t.co/oJtROuarIJ
— Twinkie Republic (@Twinkie Republic) 1531956255.0

@kylegriffin1 Putin isn’t lying to @realDonaldTrump. He doesn’t have to. Trump has rolled over and sold his black s… https://t.co/AXw9m8OBp0
— Colleen Healing (@Colleen Healing) 1531955127.0

On Wednesday night, the New York Times published a bombshell report showing that President-Elect Trump was shown detailed classified intelligence in January 2017 proving Putin personally ordered Russian military officers to wage a disinformation campaign on American social media as well as cyber attacks on voting systems in an effort to sway the election to Trump.

"The evidence included texts and emails from Russian military officers and information gleaned from a top-secret source close to Mr. Putin," the Times wrote, "who had described to the C.I.A. how the Kremlin decided to execute its campaign of hacking and disinformation."

Trump "grudgingly" accepted the findings, the report stated. Since then, Trump has ferociously chided any suggestion that Russia helped propel him to power. This is especially true regarding Special Counsel Robert Mueller's investigation into Russia's attack on our election, which Trump continues to refer to as a "rigged witch hunt."

During a press conference that Trump attended with Putin on Monday following their meeting in Helsinki, the president accepted Putin's denial of interfering in the American election. Moments later, Putin admitted he wanted Trump to win the election.

When Trump was asked by a reporter if “Russia still targeting the U.S.," Trump replied, "no," despite Director of National Intelligence Dan Coats' having just expressed the opposite as he was seated at the same table as the president in the Cabinet Room.

Trump had said on Tuesday that he agreed with American intelligence agencies' conclusions that Russia's effort to influence American voters remains ongoing.

Trump also said he misspoke at the press conference when he said he didn't "see any reason why it would be" Russia who disrupted the election.

Trump claimed he meant to say he "didn't see any reason why it wouldn't be Russia."