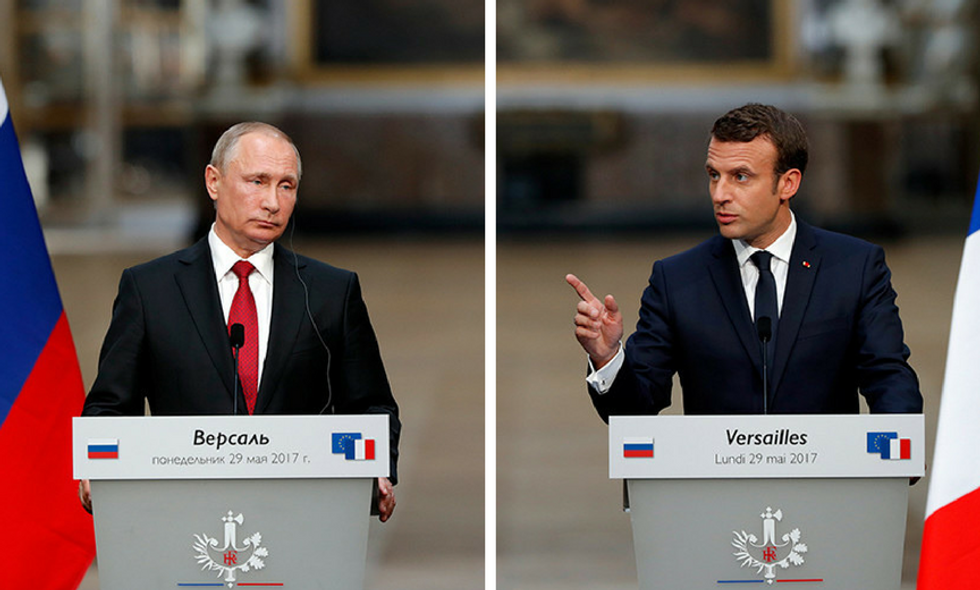 In a private meeting between the two heads of state, Macron reportedly challenged Putin on LGBT rights in Chechnya and pushed for more cooperation on fighting ISIS in Syria. They emerged for a joint public news conference, during which Macron pulled no punches.

France is back, and big time on the international scene that it never left. Seeing Macron putting Putin his place i… https://t.co/k30CYl8TUd
— Weddady (@Weddady) 1496072749.0

People could learn from Macron's defense of civil society and human rights in Russia during his meeting with Putin.
— A. Shuja (@A. Shuja) 1496071008.0

The French election had been marred by Russian meddling similar to that in the U.S. in 2016, including a cyber attack, the release of Macron campaign e-mails via Wikileaks, as well as a Russian propaganda machine attempting to harm Macron in the waning days of the election. This led to a media blackout of the leaks and Macron banning Russia Today and Sputnik from his campaign headquarters.

In the end, Macron won a decisive victory against far right nationalist candidate Marine Le Pen, who was widely seen as the candidate of choice of the Kremlin.

As a final rebuke to Putin, it was also confirmed on Monday that France had accepted its first gay refugee from Chechnya, where the persecution of gay men has led to the imprisonment and torture of more than 100, with dozens seeking refuge and safe haven outside of the Russian federal republic.

The response from Russian officials has included Chechen leader Ramzan Kadyrov denying that gay people exist in Chechnya, and Putin agreeing to look into the issue, which so far has resulted in no action.