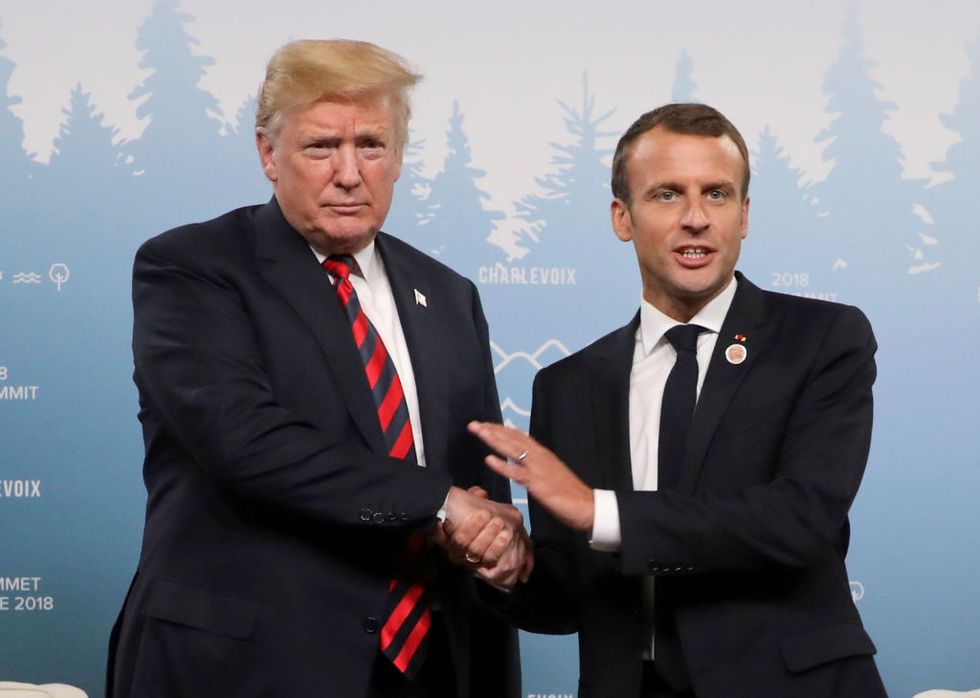 The additional money that they’re willing to put up has been really amazing,” Trump said yesterday, without providing specifics. “Yesterday I let them know that I was extremely unhappy with what was happening, and they have substantially upped their commitment.”

"There is a communique that was published yesterday. It's very detailed," Macron said. "It confirms the goal of 2 percent by 2024. That's all."

The document to which Macron refers, published Wednesday before an impromptu crisis meeting during which Trump claimed NATO is "stronger than ever," states that allies have started to increase the amount they spend on defense in real terms and "some two-thirds of allies have national plans in place to spend 2 percent of their gross domestic product on defense by 2024."

The French leader stressed that he did not believe it would be a good idea for NATO allies to raise their defense spending to 4 percent of GDP from 2 percent, as Trump had suggested.

Macron also waved away reports that Trump threatened to withdraw the United States from the NATO military alliance over a funding dispute.

“President Trump never at any moment, either in public or in private, threatened to withdraw from NATO,” Macron said.

Romanian President Klaus Iohannis echoed Macron's remarks and denied that Trump had pushed for NATO allies to increase their spending.

“Trump said things plainly as is normal between friends and allies. ... We committed ourselves to spending a bit more," Iohannis told Associated Press reporters.

Political tensions have risen at the NATO conference, particularly as President Trump, who once declared NATO––a formal alliance between the United States and European nations to defend each other from the possibility of the communist Soviet Union taking control of their territories––"obsolete," has ramped up attacks against the organization in recent days.

Before his trip to Europe, the president published tweets which criticized NATO allies for what he believes are lopsided defense commitments.

But alliance funding does not work the way the president believes it works. As CNN's Ryan Brown points out:

For collective defense to work, the 29 members have to keep their armed forces in good shape, so NATO sets an official target on how much they should spend, which they call a "guideline." That stands at 2% of GDP.

There is no penalty for not meeting the 2% target. Each country decides how much it is going to spend and what it will spend on. If one country spends less or more than the guideline, other countries are not obliged to follow suit.

And despite Trump's repeated suggestion that NATO members owe the US, members do not pay each other.

Brown points out that NATO members "do contribute to a collective budget for the alliance," and that there is a "civilian budget of about $286 million for 2018, used mainly to fund the NATO headquarters in Belgium and its administration," as well as "a military budget of $1.54 billion for 2018, which is used to fund some operations and the NATO strategic command center, as well as training and research." But, he observes:

Yesterday, Trump made headlines after he claimed that Germany “is totally controlled by Russia," citing the controversial Nord Stream 2 gas pipeline project, an offshore natural gas pipeline from Vyborg in the Russian Federation to Greifswald in Germany.

“I think it’s very sad when Germany makes a massive oil and gas deal with Russia, where you’re supposed to be guarding against Russia and Germany goes out and pays billions and billions of dollars a year to Russia,” Trump said at the time.

He added: “They will be getting between 60 and 70 percent of their energy from Russia and a new pipeline, and you tell me if that is appropriate because I think it’s not.”

The president repeated these claims in several other tweets.

Billions of additional dollars are being spent by NATO countries since my visit last year, at my request, but it is… https://t.co/rrj6jUggJd
— Donald J. Trump (@Donald J. Trump) 1531352013.0

Presidents have been trying unsuccessfully for years to get Germany and other rich NATO Nations to pay more toward… https://t.co/8jHyFJgO3y
— Donald J. Trump (@Donald J. Trump) 1531375409.0

The president's comments yesterday compelled German Chancellor Angela Markel to reject his claims of Russian control by recalling her own youth in Soviet-dominated East Germany and defending her nation’s independence and policies:

Because of given circumstances, I want to point out one thing: I experienced the Soviet occupation of one part of Germany myself. I am very happy that today we are united in freedom, the Federal Republic of Germany. Because of that we can say that we can make our independent policies and make independent decisions. That is very good, especially for people in eastern Germany.

Merkel also struck down Trump’s claims that the United States spends too much on defense, while other NATO members spend too little.

“Germany contributes a lot… Germany is the second largest provider of troops, the largest part of our military capacity is offered to NATO and until today we have a strong engagement toward Afghanistan. In that we also defend the interests of the United States,” she said.

She concluded her statements by announcing Germany’s plan to increase its defense spending.