As He Departed for Europe, Donald Trump Once Again Took a Swipe at His NATO Allies and Instead Praised Putin 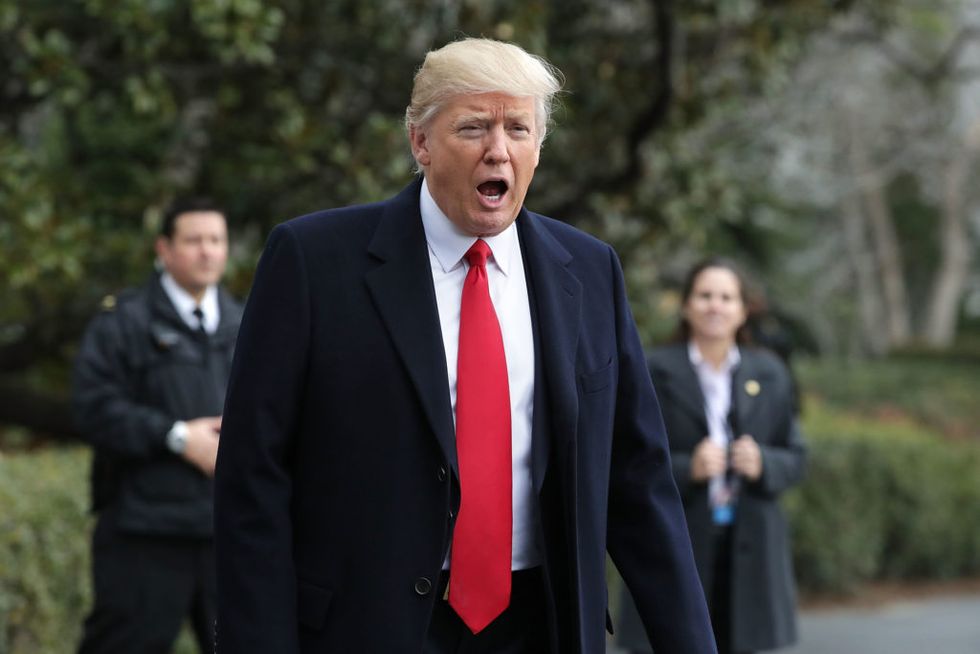 WASHINGTON, DC - FEBRUARY 03: U.S. President Donald Trump stops to say something to members of the news media before boarding Marine One and departing the White House February 3, 2017 in Washington, DC. Trump is traveling to Palm Beach, Florida, to spend the weekend at his Mar-a-Lago Club. (Photo by Chip Somodevilla/Getty Images)

President Donald Trump once again took a swipe at NATO allies while praising Russian President Vladimir Putin during his visit to the United Kingdom on Tuesday.

"Frankly, [Russian President] Putin may be the easiest of them all," Trump told reporters, referring to his feelings on dealing with NATO allies. "Who would think?"

The president repeated his view that NATO "has not treated us fairly" but he thinks "we'll work something out." and "all countries will be happy."

Trump then reiterated his opinion that NATO nations like the U.K. "pay far too little," something the president believes has been "going on for a long time."

The president has bemoaned NATO allies for not paying what he believes is a fair share of their GDP to support the organization, which was set up after World War II to maintain peace and security in Europe.

The 29-nation agreement also establishes a system of collective defense, whereby member nations consider an attack on one country an attack on all.

On Monday, Trump tweeted other NATO nations "must do much more," citing Germany's contribution of one percent of their GDP.

On Tuesday, as he prepared to leave for Europe, Trump again wrote: "The U.S. is spending many times more than any other country in order to protect them," which he described as "not fair to the U.S. taxpayer."

Trump is either unaware or oblivious to the sacrifices our NATO allies made in the months following the terrorist attacks of September 11, 2001. Germany, which Trump particularly enjoys targeting, lost more than 50 troops during the U.S-led invasion of Afghanistan, for example.

The president's bellicose rhetoric on NATO has allies worrying that he may try to extort higher spending by threatening to pull American troops out of Europe.

“I’ll see NATO and I’ll tell NATO, ‘You’ve got to start paying your bills,’” Trump said at a Montana rally last week. “The United States is not going to take care of everything.”

“To be honest, no one really knows how Trump will act during the summit,” Tomas Valasek, a former Slovak ambassador to NATO said. “His unpredictability is not a byproduct but a design feature — he likes it that way. He comes to this meeting not only prepared to go into confrontation with his peers and allies but with his own staff.”

Twitter jumped on the president for his praise of Putin.

@spahn_r @CBSNews The most astounding thing is the fact there are still people in America who genuinely believe he… https://t.co/0FY20O8TuX
— Joe Samuel-Cushing (@Joe Samuel-Cushing) 1531227787.0

One user called Trump a "traitor" who is "handing our country over to Putin on a silver platter."

Trump congratulated Putin for winning reelection in March, despite explicit instructions from his staff not to do so.

Trump is scheduled to have a one-on-one meeting with Putin next week in Helsinki, Finland. No note takers or recordkeepers will be present when the two leaders sit down behind closed doors.