He won that round. 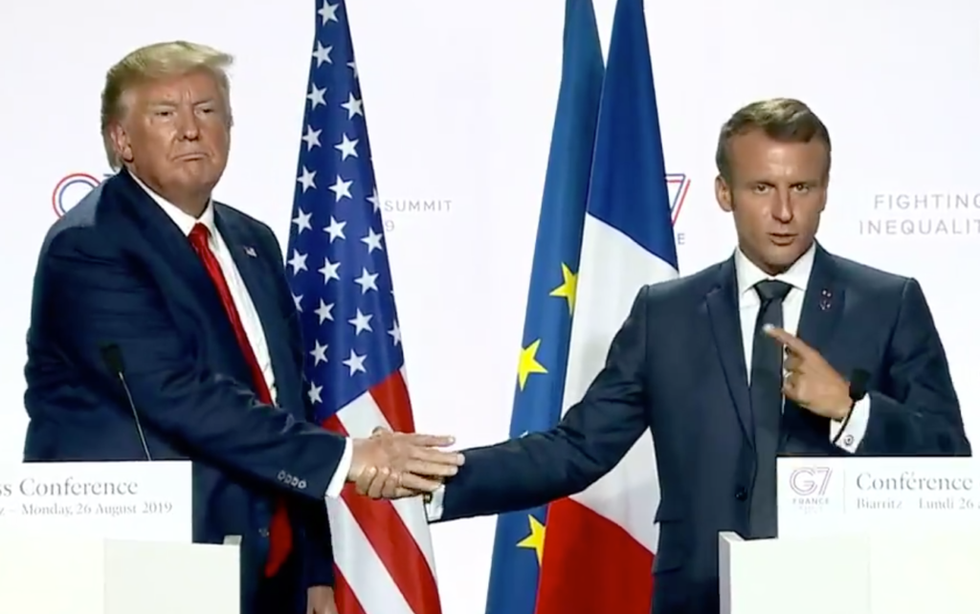 President Donald Trump and French President Emmanuel Macron shared an awkward handshake this past weekend to close out the G7 summit in France.

Trump often uses handshakes as an expression of dominance—squeezing the recipient's hand, jerking it around, and refusing to let go. The result, rather than an assertion of power, often just results in awkwardness for nearly everyone but the president himself.

In this case, Macron wasn't fazed by the attempt and ended up beating Trump at his own game.

It's the latest battle in what some laughingly consider a handshake war between the two.

This handshake business is the most bizarre, awkward part of the Trump era. https://t.co/jPdOSmGevF
— Josh Jordan (@Josh Jordan) 1500060679.0

LOL of course the news conference had to end with another awkward Trump/Macron handshake https://t.co/Ar3N9mYXOs
— Aaron Rupar (@Aaron Rupar) 1524591442.0

Other world leaders and officials have been subjected to the petty power play as well.

The Trump Power Play Handshake. Getting Jerked Around. And You Better Like It. https://t.co/wHTNdmlXmp
— Lonnie Hicks (@Lonnie Hicks) 1486938978.0

The Relson Gracie Jiu-Jitsu Academy even released a comical video on how to defend against handshakes like that of the Donald's.

Another famous disarmer of the Trump handshake is Canadian Prime Minister Justin Trudeau.

Trudeau humbly told the Canadian press later that there was "nothing to read in to" the exchange.

As for the latest exchange between Macron and Trump, people were jokingly cheering at the French president's "victory."

Good thing Trump isn't at all insecure about his hands.