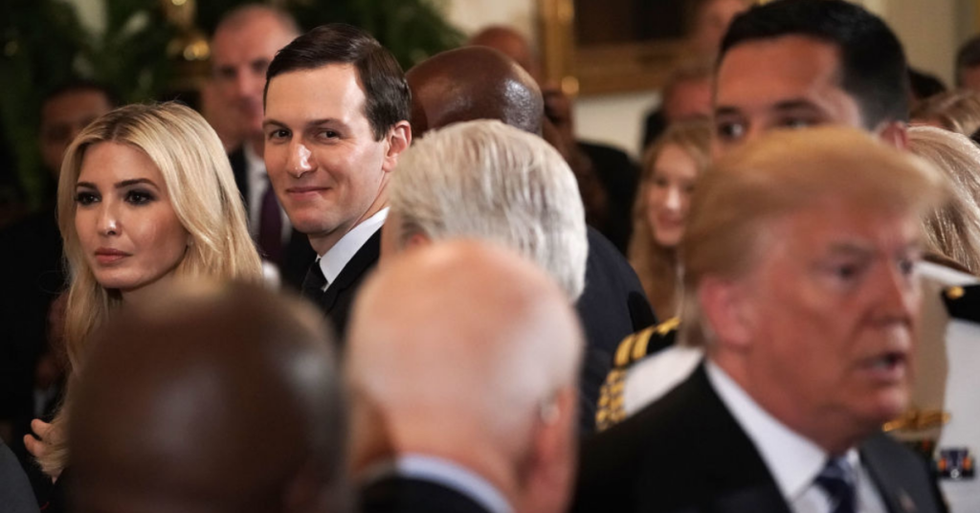 President Donald Trump instructed John Kelly, his former chief of staff, to "fire" his children from the White House after complaining that his daughter Ivanka and his son-in-law Jared Kushner “didn’t know how to play the game," according to Kushner Inc., a new book by journalist Vicky Ward. The president said the two kept generating negative media coverage.

It had been Kelly who said firing them would look bad, so he decided to make life difficult for the two in the hope that they would resign on their own. The plan backfired. They are still there. Kelly, however, resigned from the White House in December.

Ward also reveals that Ivanka and Kushner kept getting refused travel on Air Force planes, but that they found a workaround by inviting cabinet-level officials to their trips.

Although conservative critics have dismissed Ward's book as simply a work of "fiction," Ward says the 220 people she interviewed for the project "might beg to disagree."

Ward says she wrote the book to dispel suggestions that Ivanka and Kushner "have been moderating influences on the president."

I wrote #KushnerInc in part to pierce the narrative that Ivanka Trump and Jared Kushner have been moderating influe… https://t.co/n2rIZ43mIw
— Vicky Ward (@Vicky Ward) 1552353751.0

White House Press Secretary Sarah Huckabee Sanders disputed that the events depicted in the book are accurate, saying it's "based on shady anonymous sources and false information instead of all the incredible work Jared and Ivanka are doing for the country."

For may, the book provides more corroborating evidence that Kushner and Ivanka are threatening national security and personally benefiting from taxpayer funds.

Now I know that Jared Kushner and Ivanka trump have both violated every norm, every rule, are as corrupt as their f… https://t.co/gBD9sKPpRk
— Ricky Davila (@Ricky Davila) 1552413093.0

The book comes a year after a bombshell New York Times report revealed President Trump asked Kelly to oust Ivanka and Kushner from their roles as senior advisors. The Times obtained the information from White House aides who spoke on condition of anonymity, providing a window into a White House rife with dysfunction, where morale is lower than ever before.

The chaos, these sources said, is reminiscent of the White House’s earliest days––when the president’s travel ban sent the nation into a furor and forced airports into lockdown and, it should be noted, a profoundly different crop of faces reigned (reports since Hope Hicks, the White House Communications Director, turned in her resignation emphasized the revolving door nature of the White House). Kelly, they added, “should have carried out a larger staff shake-up when he came in.” His failure to do so “has allowed several people to stagnate, particularly in policy roles.”

The aides admitted that they’d expressed frustration amongst themselves that Kushner and Ivanka have remained at the White House, despite the president’s occasional outbursts of annoyance with them, “saying they never should have come to the White House and should leave.” The aides noted that Trump had told the couple they should keep serving in their roles, “even as he has privately asked Mr. Kelly for his help in moving them out.”

Trump is “isolated and angry,” according to the report. At the time, he sparred publicly with Jeff Sessions, his former attorney general, calling Sessions’ decision to have the Justice Department inspector general––not prosecutors––to investigate potential abuses by the FBI on surveillance warrants “disgraceful,” and “watches members of his family clash with a chief of staff he recruited to restore a semblance of order — all against the darkening shadow of an investigation of his ties to Russia.” In fact, insiders noted, he considered Sessions’ decision to recuse himself from the special counsel’s Russia probe the “original sin” which has left him vulnerable.

Meanwhile, Kushner and Ivanka had grown “exasperated” with Kelly, whom they believed wielded undue influence over the president and threatened their continued access to him. But Trump’s frustrations with Kushner run deep, and Kushner’s potential ouster came on the heels of Kelly's decision to downgrade Kushner’s interim security clearance from Top Secret to Secret, making him no longer privy to much of the sensitive information previously available to him.

The report added that Trump considers Kushner a “liability”:

Yet Mr. Trump is also frustrated with Mr. Kushner, whom he now views as a liability because of his legal entanglements, the investigations of the Kushner family’s real estate company and the publicity over having his security clearance downgraded, according to two people familiar with his views. In private conversations, the president vacillates between sounding regretful that Mr. Kushner is taking arrows and annoyed that he is another problem to deal with.