Donald Trump Made a Questionable Claim About Russian Interference in 2018, and a Russian Expert Just Shut Him Down 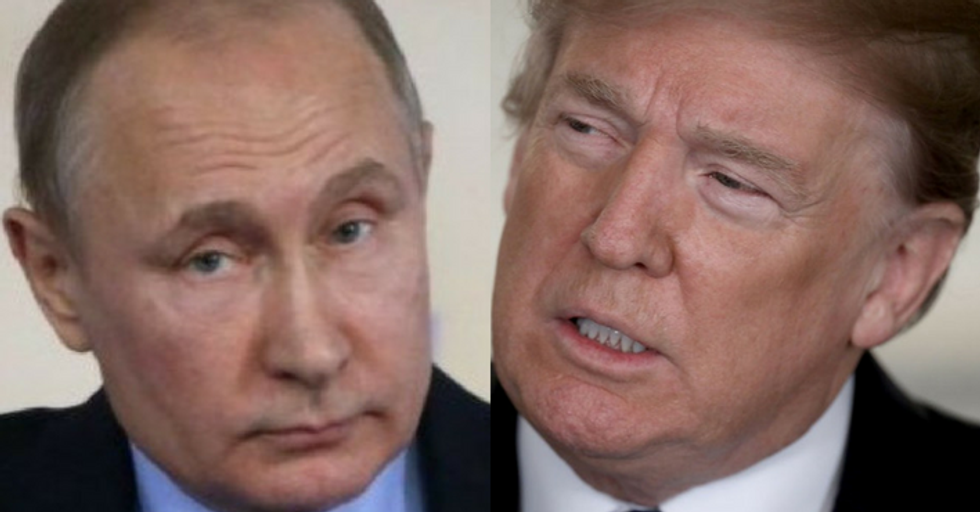 President Donald Trump continues to vacillate between denying any Russian election interference in 2016 and acknowledging it; discrediting U.S. intelligence agencies by refuting their evidence of continued Russian interference then stating Russia poses a legitimate threat in 2018.

Tuesday morning, Russia returned to being a threat. But, the President claimed, only to him.

The President took to Twitter Tuesday morning to reiterate his claim that no President ever has been tougher on Russia. It is a claim he initially made during one of the times he denied any continued Russian interference.

I’m very concerned that Russia will be fighting very hard to have an impact on the upcoming Election. Based on the fact that no President has been tougher on Russia than me, they will be pushing very hard for the Democrats. They definitely don’t want Trump!"

But journalist Sarah Kendzior, an expert on Russian authoritarian states, refutes the President's claim. She offers a very different scenario from the one posited by Trump.

In response to a potential 2018 midterms scenario from Jelani Cobb, Kendzior stated,

Scenario from @jelani9 is likely. Other possibilities: 2) Trump/Kremlin use pretense of "interference" to deem ele… https://t.co/SRsmAa5E0d
— Sarah Kendzior (@Sarah Kendzior) 1532021146.0

Then in an almost exact opposite view from the President, Kendzior stated why Russia reached out to the Trump campaign during the 2016 presidential election and why they won't be extending a helping hand to Democrats.

"Russia interfered in the 2016 election to get Trump in power for concrete reasons: remove sanctions on Russia, weaken NATO, etc."

They are not going to interfere to elect Dems in 2018 because Dems want sanctions, NATO, and an investigation of Putin and Russian oligarchs."

Russia interfered in the 2016 election to get Trump in power for concrete reasons: remove sanctions on Russia, weak… https://t.co/QIrIC31oSo
— Sarah Kendzior (@Sarah Kendzior) 1532448113.0

Kendzior speaks Russian and has a Master’s degree in Eurasian Studies and a PhD in anthropology with her focus on former Soviet Union authoritarian states. Her dissertation covered how the the Uzbekistan dictatorship employed the internet to undermine public trust in and manipulate the media.

In 2016, Kendzior began pointing to parallels between the Uzbekistan strategy she studied extensively and then candidate Trump's Russian business entanglements, xenophobic and racist rhetoric, undermining of trust in mainstream media and admiration for Putin. This was before the world knew for certain that Russia actively engaged the Trump Campaign —and family— in a Trump Tower meeting.

Regarding Trump's repeated claims of no President being tougher on Russia, history refutes that claim as well.

It's also worth noting Republican President Ronald Reagan receives historical credit for ending the Cold War and helping bring down the Berlin Wall. Reagan also proposed the Strategic Arms Reduction Treaty (START) which was ratified in 1992.

President Trump —being tougher than Kennedy, Reagan, both Bush Presidents and Obama— publicly disparaged the U.S. its "foolishness" and "stupidity" being the reason for sour relations with Russia, and not Russia's invasion of the Ukraine or Crimea or poisoning a former Russian agent and his daughter in the United Kingdom or killing journalists or criminalizing homosexuality and any number of other human rights abuses.

Trump also discredited U.S. intelligence regarding Russian interference, refused to enact sanctions set forth by Congress, held a closed door private meeting with Russian President Vladimir Putin in Helsinki, Finland, and gave a highly criticized joint news conference. After the news conference, the hashtag #TreasonSummit trended in social media and Trump foes and friends rebuked him for his pandering to Russia.

Kendzior, after refuting Trump's claim of Russia wanting to elect Democrats, issued a warning to voters.

I've been surmising for months that the GOP may try to use Russian interference to delegitimize Dem 2018 wins by claiming Russia "rigged" it for them."

As my tweets above show, there's no logic to that objective. But Trump & co are now pushing it anyway. Don't fall for it!"

But her final message, with the 2018 midterms 104 days away, even if Trump or the GOP try to discredit election results if they lose in November: vote anyway.