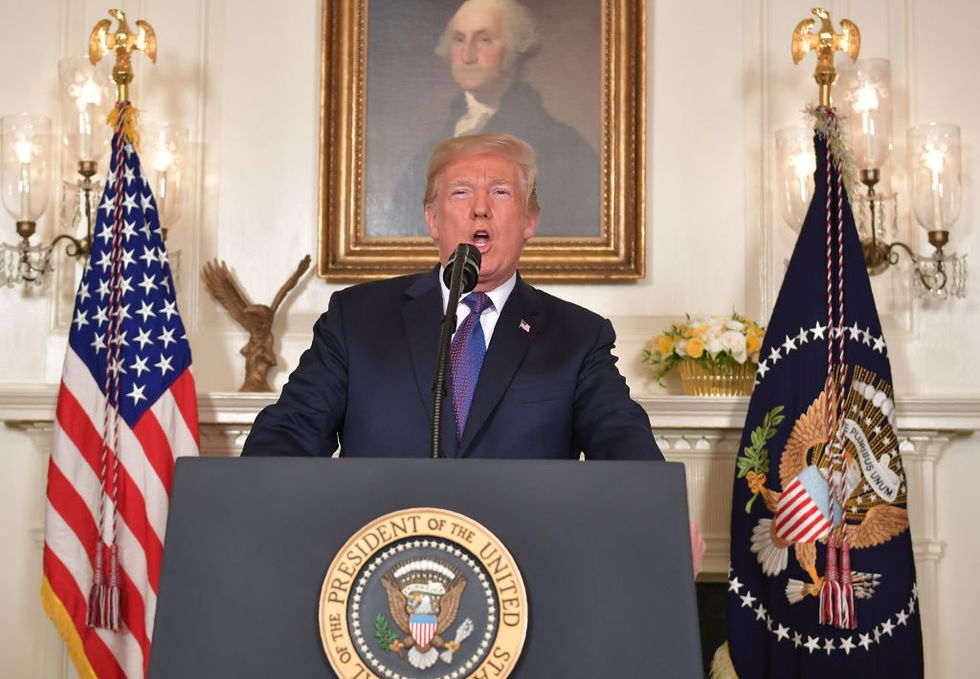 US President Donald Trump addresses the nation on the situation in Syria April 13, 2018 at the White House in Washington, DC. (Photo credit MANDEL NGAN/AFP/Getty Images)

While President Donald Trump hailed his joint military air strikes, with France and Britain against Syria, as a "Mission Accomplished", the main United States ally in the region had a different view. Israel characterized the action as a failure.

"It’s certainly not a pleasant experience to be hit with over 100 Tomahawk cruise missiles fired by a superpower like the United States,” a senior Israeli Cabinet member told Al-Monitor.

“Still, it is obvious to us that this attack does not increase America’s deterrent capacity in the region in any significant way, nor does it indicate whether President Donald Trump is planning what we would like to see happen in the future."

Once the dust settles, it will become clear that President Trump did the minimum he could, which is far from what really needs to happen in order to rein in Bashar al-Assad, Putin and Nasrallah.”

The official referred to Syrian President Bashar al-Assad, Russian President Vladimir Putin and Hezbollah Secretary-General Hassan Nasrallah, all seen by Israel as central to any current conflicts in Syria.

The strike on Friday involved 105 missiles fired from air and sea onto three targets suspected of being chemical weapons facilities. Israeli officials had much to say to state media about the effectiveness, or lack thereof, however.

"If President Trump had ordered the strike only to show that the US responded to Assad's use of chemical weapons, then that goal has been achieved," Israel's Ynetnews quoted from a senior Israeli defense official.

But if there was another objective — such as paralyzing the ability to launch chemical weapons or deterring Assad from using it again — it's doubtful any of these objectives have been met."

But an Israeli intelligence official was even more critical of the United States recent efforts in Syria.

The statement of 'Mission Accomplished' and (the assertion) that Assad's ability to use chemical weapons has been fatally hit has no basis."

The Israeli official referenced a Tweet made by the president after the air strikes.

A perfectly executed strike last night. Thank you to France and the United Kingdom for their wisdom and the power o… https://t.co/oIPJVo3zQn
— Donald J. Trump (@Donald J. Trump) 1523708460.0

Trump, aware of the backlash his premature declaration of victory created, went to Twitter again with a followup pronunciation attacking the American media.

The Syrian raid was so perfectly carried out, with such precision, that the only way the Fake News Media could deme… https://t.co/PVFzvasea5
— Donald J. Trump (@Donald J. Trump) 1523794782.0

It is the president's use of Twitter that also disappointed Israeli officials. Namely, giving warnings on social media of pending military actions.

Russia vows to shoot down any and all missiles fired at Syria. Get ready Russia, because they will be coming, nice… https://t.co/tFXJAYDnOh
— Donald J. Trump (@Donald J. Trump) 1523444250.0

After Trump tweeted the warning, Russia and Syria moved assets to more protected locations. The president drew widespread criticism for his Tweet. Trump responded to that harsh feedback as well, in the usual manner.

If you want to shoot — shoot, don't talk. In the American case, this is mostly talk. They themselves show actions are not going to follow."

Despite the United States and their allies' latest missile strikes, the Assad led Syrian government cleared out additional rebel forces, strengthening and fortifying its position.

The president has not yet responded to Israel's statements, but he should be well aware of them as his favorite medium has shared them while making certain Trump is in on the discussion.

Hey #MAGA, this is what the Israel intelligence service said about Trump's Syria attack: - "The statement of 'Missi… https://t.co/Vh7kYSxcvO
— John Oberlin (@John Oberlin) 1523989624.0