It's even visible from his helicopter. 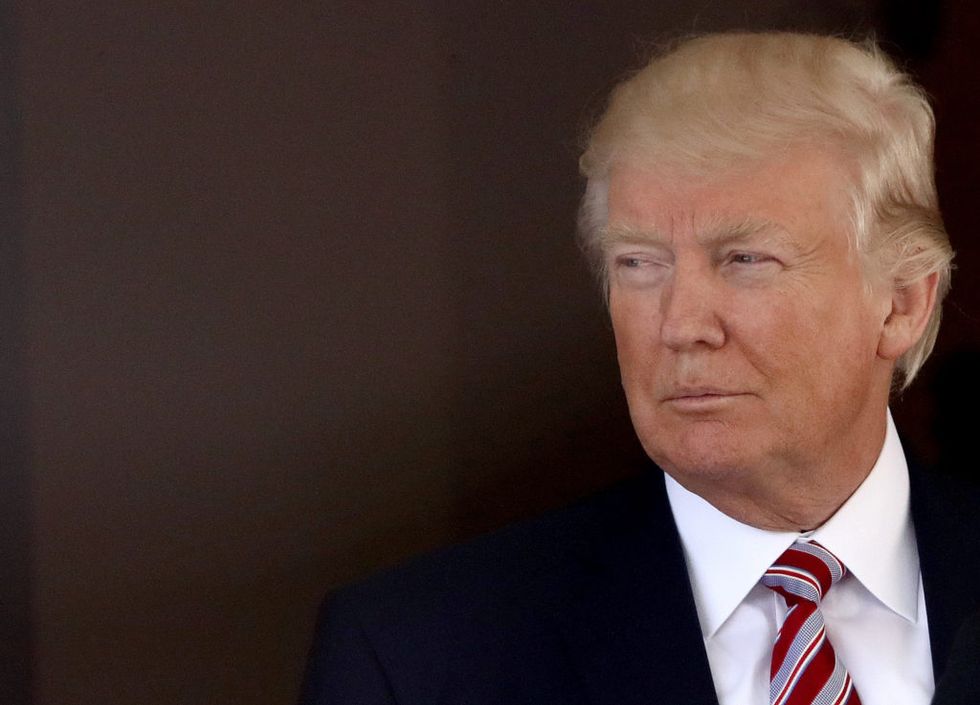 WASHINGTON, DC - MAY 16: U.S. President Donald Trump waits on the arrival of Turkish President Recep Tayyip Erdogan at the White House May 16, 2017 in Washington, DC. Trump and Erdogan met in the Oval Office to discuss a range of bilateral issues. (Photo by Win McNamee/Getty Images)

President Donald Trump is scheduled to make his first official visit to the United Kingdom since taking office in January, 2017. In preparation for his Thursday, July 12 arrival, the citizens of the UK have come up with some clever ways to greet the United States leader.

In London there will be an airborne giant inflatable Trump baby, in Sheffield there will be a ban on Trump and a Mexican fiesta thanks to the Lord Mayor and people across the UK are working to get Green Day's song "American Idiot" to number one on the charts.

And now, at Moak Farm in Stoke Mandeville, a crop circle has been laid into the farm's field by an undisclosed artist. Stoke Mandeville is a village and civil parish in the Vale of Aylesbury in Buckinghamshire, England.

It also lies right on the flight path of the helicopter engaged to take the President and First Lady to a welcome reception at Blenheim Palace in Oxfordshire hosted by Prime Minister Theresa May.

"I was approached by an artist, who wished to remain anonymous to use one of my crop fields. They were specifically looking for one in the flight path that Donald Trump will take when he comes to the UK this week."

"There was a financial transaction, I won't say how much but it was remuneration for the damaged crops, which won't be salvageable."

The artist created a crop circle, easily visible from a helicopter. And the message?

"БЛЯДЬ TRUMP" can be seen in a crop circle at Moat Farm. (Twitter)

For those not conversant in Russian, the message reads "FUCK TRUMP." The crop circle is described as an "art installation" by the farm's owner.

The farmer himself however has no opinion on the visiting foreign leader, stating,

A lot of people have asked me this, but my thoughts on Trump are completely neutral. For me it was a transaction between myself and the artist."

The unknown artist's views appear obvious however based on their artwork.

Work on the crop circle was done Sunday, July 8, and reportedly took 14 hours to complete in extremely hot weather. It measures 200 meters —over 650 feet— wide.

The design was planned with a helicopter in mind. With a drone, photos were taken from 400 feet above the crop circle to get a president's eye view.

News of the artist's work began to spread quickly.

It began to get more notice on social media after The Bucks Herald article was published at about noon their local time on Tuesday.

A message to Donald Trump has appeared as a crop circle on a Stoke Mandeville farm https://t.co/o4ggXIzgYd
— Bucks Herald (@Bucks Herald) 1531216993.0

From there the Twittersphere took off.

This Russian crop circle message has appeared on the flight path Donald Trump will take during his trip to the UK o… https://t.co/T94Y27xRZ4
— Reality Bite (@Reality Bite) 1531231966.0

so donald trump is visiting my hometown on friday, and in response someone has created a large crop circle on a loc… https://t.co/tMM4ErkXuG
— molly rose (@molly rose) 1531225827.0

I love some of the special preparations being made for trumps visit to the UK. 'F**k Trump' crop circle written in… https://t.co/LxQbjCYqVE
— Rafaella Gi (@Rafaella Gi) 1531226005.0

Although several people suggested that the President may not be able to read Russian. However as the First Lady is fluent in Serbo-Croatian, she may be familiar with the Serbian Cyrillic alphabet, a close cousin to the Cyrillic script used in the Russian language.

@georgescircus @fbtoast What will be funny is when he doesn't bother to find out what is says, assumes it is a comp… https://t.co/fZlykSqhaa
— Emma Redwellystone (@Emma Redwellystone) 1531319259.0

From the United Kingdom, the President is set to travel to Helsinki for a closed door meeting with Russian President Vladimir Putin.