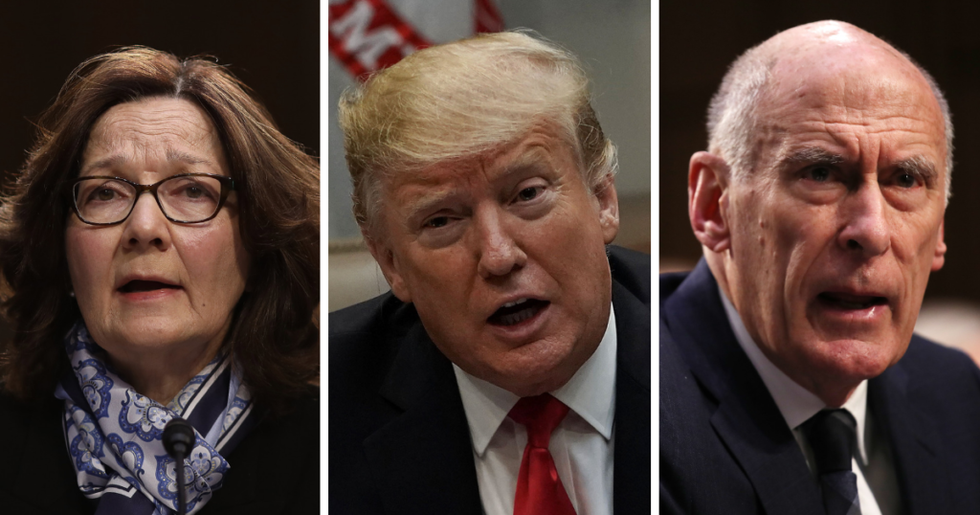 The country's top intelligence officials corrected several of President Donald Trump's claims about the threats posed by North Korea, ISIS, and Iran during a hearing with the Senate Intelligence Committee.

Trump declared the nuclear danger posed by North Korea to be "over" following his summit with DPRK Leader Kim Jong Un last summer.

"Just landed - a long trip, but everybody can now feel much safer than the day I took office," Trump tweeted upon returning to Washington. "There is no longer a Nuclear Threat from North Korea."

Director of National Intelligence Dan Coats said this is not true.

“We currently assess that North Korea will seek to retain its WMD capabilities and is unlikely to completely give up its nuclear weapons because its leaders ultimately view nuclear weapons as critical to regime survival," Coats said Tuesday. "Our assessment is bolstered by our observations of some activity that is inconsistent with full nuclearization."

Coats added that while sanctions on North Korea have "been effective and largely maintained," the rogue country "seeks to mitigate the effects of the U.S.-led pressure campaign through diplomatic engagement, counter-pressure against the sanctions regime, and direct sanctions evasion."

CIA Director Haspel confirmed that North Korea “is committed to developing a long-range nuclear-armed missile that would pose a direct threat to the United States.”

In December, Trump declared that ISIS had been defeated in Syria and announced a withdrawal of American troops from the civil war-ravaged country.

“We have defeated ISIS in Syria, my only reason for being there during the Trump Presidency,” the president said at the Pentagon.

Haspel told the Senate Intelligence Committee on Tuesday that ISIS is "still dangerous...and they still command thousands of fighters in Iraq and Syria."

She added that the United States must maintain a "robust monitoring machine and the ability to project into Syria if we need to."

"While we have defeated the caliphate, with a couple of little villages left, we should not underestimate the ability of terrorist groups, particularly ISIS and affiliated groups," Coats said. "ISIS will continue to be a threat to the United States," he warned. "We're going to have to keep our eyes on that."

Coats and Haspel also bucked Trump's assertion that Iran is trying to build a nuclear weapon.

Although Trump pulled the United States out of the Joint Comprehensive Plan of Action (the "Iran Nuclear Deal") last year, American intelligence sources say Iran is still complying with the agreement.

Based on the latest intelligence, "we do not believe Iran is currently undertaking the key activities we judge necessary to produce a nuclear device,” Coats said, though he cautioned that Iran has “publicly threatened to push the boundaries” if the remaining powers fail to live up to their part of the deal.

Haspel agreed with Coats' assessment, telling Senator Angus King (I-ME) the Iranian government is contemplating ways to “lessen their adherence" to the agreement.

“They are making preparations that would increase their ability to take a step back if they make that decision,” Ms. Haspel said. “At the moment, technically they are in compliance, but we do see them debating among themselves because they haven’t seen the economic benefits they hoped for from the deal.”

Twitter was particularly harsh on Trump for his handling of North Korea.

North Korea has not denuclearized. They have merely ceased testing weapons.

@ABC Why is there such a disconnect between what Donald Trump feeds to the tv camera and his followers and what his… https://t.co/hQxv9RMLuw
— John T Marohn (@John T Marohn) 1548785379.0

@keithboykin @NatashaBertrand But I thought he was going to get the Nobel Peace Prize!!
— Never Trumper (@Never Trumper) 1548787145.0

Trump's lack of faith in our intelligence agencies is disturbing, and it seems unlikely the truth will change the president's internalized narrative.

@SamanthaJPower I'd like to think that the truth matters to Trump & republicans, but I've learned through experience that it doesn't.
— Kay Shan (@Kay Shan) 1548788675.0

@mitchellreports @KenDilanianNBC @SenateGOP @HouseGOP Is this ENOUGH for you MORONS to finally realize that the Tod… https://t.co/XUpC8P8Uts
— Richard Denton (@Richard Denton) 1548783979.0

In the Worldwide Threat Assessment report, Coats also laid out the increasing threat of cyber attacks by China, Russia, North Korea, and Iran.

"China, Russia, Iran, and North Korea increasingly use cyber operations to threaten both minds and machines in an expanding number of ways—to steal information, to influence our citizens, or to disrupt critical infrastructure," the report says.

Absent from Tuesday's testimony was any mention of a threat along the southern border. The report briefly mentions Mexico and drug cartels on page 18, though it stops short of backing up Trump's demand for a border wall.

One big picture takeaway from this intelligence hearing: There are huge new challenges to the U.S. The president is… https://t.co/i4xMLx20Ry
— Ken Dilanian (@Ken Dilanian) 1548778525.0