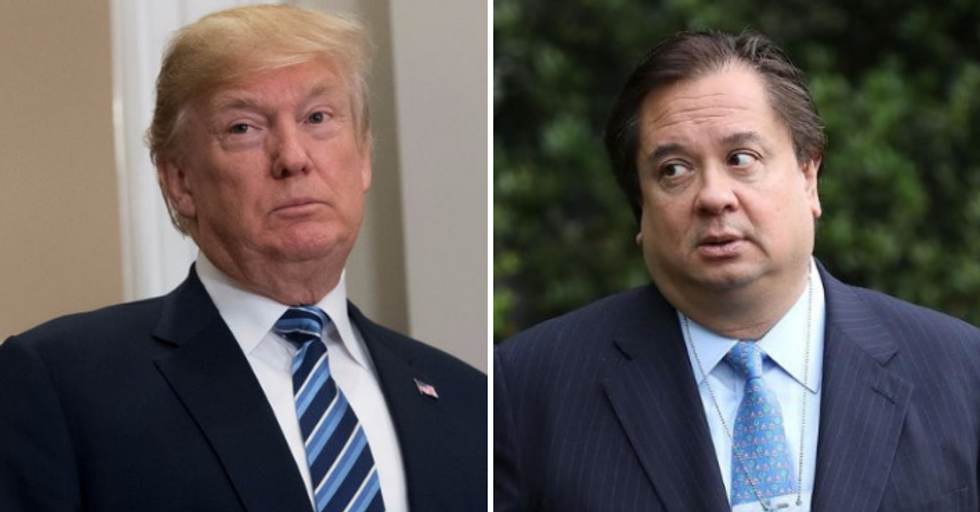 Looking to deflect from his own legal and political issues, Trump went all the way back to 2008 looking for an error from Barack Obama to use for a whataboutism on Twitter. The President catches a lot of criticism over his false statements in his speeches, rallies, official statements and Twitter posts.

Multiple organizations actually track Trump falsehoods online, keeping running tallies. In order to prove he was not alone in making false claims, late Friday night, the President shared an incident from 2008 while then candidate Obama misspoke at a campaign rally, claiming no one in the media noticed.

But George Conway shot back, explaining how an Obama slip of the tongue that he acknowledged as a mistake—he meant to say 47 states of the 48 continental United States—differed from the many examples the press and public highlight from Trump.

Needless to say, there’s a huge difference between an isolated slip of the tongue and ceaseless, shameless, and wit… https://t.co/Xqu5nhsmYk
— George Conway (@George Conway) 1536982140.0

To rub a bit more salt in the wound, Conway then pinned the tweet to the top of his account page. He since unpinned it.

President Donald Trump is still dealing with fallout from a tell-all book from a former staffer he personally brought on board from his own circle of friends. Now famed investigative journalist Bob Woodward released his book, Fear: Trump in the White House, covering the Trump administration based on 100s of hours of interviews with its members as well as memos, meeting notes and personal diaries.

And the President still wants to know who in his inner circle went to The New York Times with an OpEd criticizing him.

Not to mention there are multiple members of his family and administration involved in several ongoing investigations. The plea agreements for his former personal lawyer, Michael Cohen, and the recently announced plea deal for his 1980s Washington lobbyist and 2016 campaign chairman Paul Manafort also must weigh heavily on the President.

And while Conway made multiple asides on Twitter where he appeared to refer to the President, his attacks now leave no doubt. In fact, Conway's tweets about Trump led some to believe The New York Times OpEd came from Kellyanne Conway.

She denied the charge.

Reactions to both tweets on Twitter were largely unkind to the President. Although he did garner some support.

A few die-hard Trump supporters also engaged in some whataboutism on his Twitter post, making claims about Hillary Clinton or Barack Obama or other top Democrats.

However they were met with equal political meming, like stating Hillary Clinton met with a Russian agent during the 2016 campaign. The Russian agent being her opponent, Donald Trump.

Many of the respondents on the President's tweet ignored his message and instead addressed issues they felt he—and his fellow Republicans—should focus on.

@realDonaldTrump @IngrahamAngle Trump can no longer complain about the amount of money that the Mueller Investigati… https://t.co/kAlSflPxdA
— Dennis R. Hill (@Dennis R. Hill) 1537022908.0

While some sought to make the same distinction for Trump that Conway did.

@realDonaldTrump @IngrahamAngle Thanks for confirming that you don’t know the difference between a mistake and a lie.
— doctortoc (@doctortoc) 1537116377.0

As for George Conway, the public reactions largely ranged from gratitude for his honesty to concern for his marriage.

While some got in their own correction for the President.

@gtconway3d There is a difference in a slip of the tongue and actually believing there are 57 states. Also knowing… https://t.co/sqfVTsApSj
— Johnnie Bostic (@Johnnie Bostic) 1537068768.0

This is not the first time George Conway posted something unflattering about the President. He also frequently posts poor poll results and asides on the White House's varied legal situations. As for his wife's reaction, in a piece in The Washington Post about their relationship, when asked about her husband's tweets, the White House counselor stated:

"It is disrespectful, it’s a violation of basic decency, certainly, if not marital vows."

Then she asked the reporter to lie and say the quote came from "a person familiar with their relationship." When the reporter refused, Conway changed her statement claiming it was not how she personally felt. She said:

According to the tell-all book by her former colleague, Trump referred to Kellyanne Conway's half-Fillipino husband as "Fucking FLIP! Disloyal! Fucking Goo-goo." which are racial slurs.