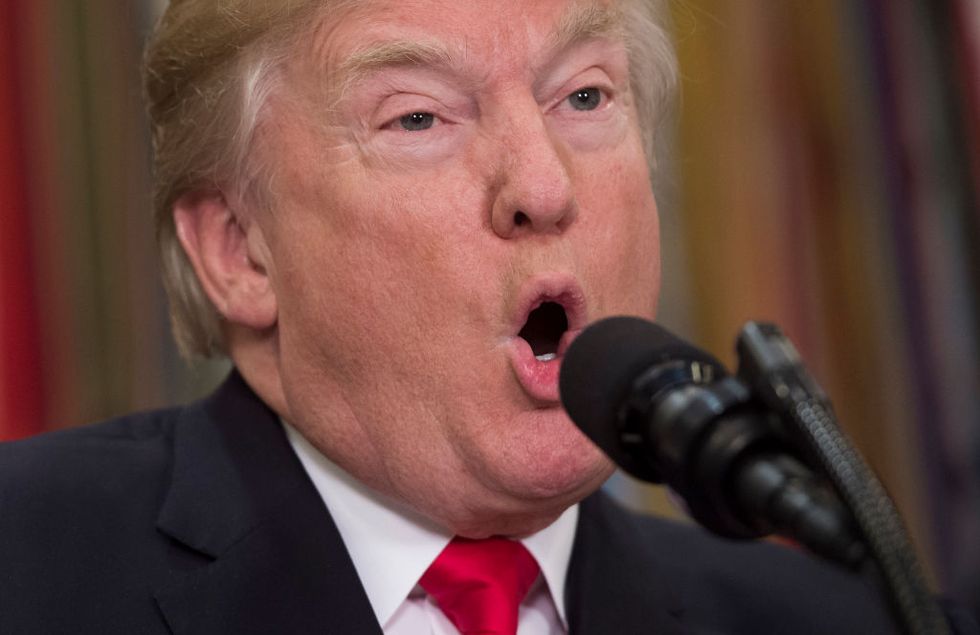 US President Donald Trump speaks prior to signing H.R. 2810, National Defense Authorization Act for Fiscal Year 2018, during a signing ceremony in the Roosevelt Room at the White House in Washington, DC. (SAUL LOEB/AFP/Getty Images)

USA Today eviscerated President Donald Trump as "not fit to clean the toilets in Obama's presidential library or to shine George W. Bush's shoes" in a scathing editorial that came snapping at the heels of Trump's attack on Senator Kirsten Gillibrand, which many criticized as sexually suggestive and demeaning, though the White House denied there was anything suggestive about the post.

"With his latest tweet, clearly implying that a United States senator would trade sexual favors for campaign cash, President Trump has shown he is not fit for office," the editorial board wrote. "Rock bottom is no impediment for a president who can always find room for a new low."

Lightweight Senator Kirsten Gillibrand, a total flunky for Chuck Schumer and someone who would come to my office “b… https://t.co/L8fAyMgZ8M
— Donald J. Trump (@Donald J. Trump) 1513083815.0

Then the board went even further:

White House spokeswoman Sarah Huckabee Sanders on Tuesday dismissed the president's smear as a misunderstanding because he used similar language about men. Of course, words used about men and women are different. When candidate Trump said a journalist was bleeding from her "wherever," he didn't mean her nose.

And as is the case with all of Trump's digital provocations, the president's words were deliberate. He pours the gasoline of sexist language and lights the match gleefully knowing how it will burst into flame in a country reeling from the #MeToo moment.

A president who would all but call Sen. Kirsten Gillibrand a whore is not fit to clean the toilets in the Barack Obama Presidential Library or to shine the shoes of George W. Bush.

But Trump's behavior, USA Today reminds its readers, is not out of character.

Donald Trump, the man, on the other hand, is uniquely awful. His sickening behavior is corrosive to the enterprise of a shared governance based on common values and the consent of the governed.

It should surprise no one how low he went with Gillibrand. When accused during the campaign of sexually harassing or molesting women in the past, Trump’s response was to belittle the looks of his accusers. Last October, Trump suggested that he never would have groped Jessica Leeds on an airplane decades ago: “Believe me, she would not be my first choice, that I can tell you.” Trump mocked another accuser, former People reporter Natasha Stoynoff, “Check out her Facebook, you’ll understand.”  Other celebrities and politicians have denied accusations, but none has stooped as low as suggesting that their accusers weren’t attractive enough to be honored with their gropes.

The editorial board also cites the following as examples that "the unique awfulness of the Trump era in U.S. politics is only going to get worse":

Then the reactions poured in––and they were overwhelmingly positive.

USA Today is not known for its opinion pieces, but this isn't the first time it's issued a blistering rebuke of the president or his policies.

The Editorial Board stressed that it has “expressed opinions about the major issues” and that it hasn’t “presumed to tell [our] readers, who have a variety of priorities and values, which choice is best for them… Until now.”

Donald Trump, the Editorial Board continued, “has demonstrated repeatedly that he lacks the temperament, knowledge, steadiness and honesty that America needs from its presidents.”

But it was quick to point out that its anti-Trump editorial does not represent “unqualified support for Hillary Clinton, who has her own flaws (though hers are far less likely to threaten national security or lead to a constitutional crisis).” The Editorial Board “does not have a consensus for a Clinton endorsement.”

“Some of us look at her command of the issues, resilience and long record of public service––as first lady, U.S. senator and secretary of State––and believe she’d serve the nation ably as its president,” the editorial continues. “Other board members have serious reservations about Clinton’s sense of entitlement, her lack of candor and her extreme carelessness in handling classified information.”

“Whatever you do, however, resist the siren song of a dangerous demagogue,” it concludes. “By all means vote, just not for Donald Trump.”

The Board then proceeded to “spell out” a litany of reasons why Trump should not be president which included, but are not limited to: