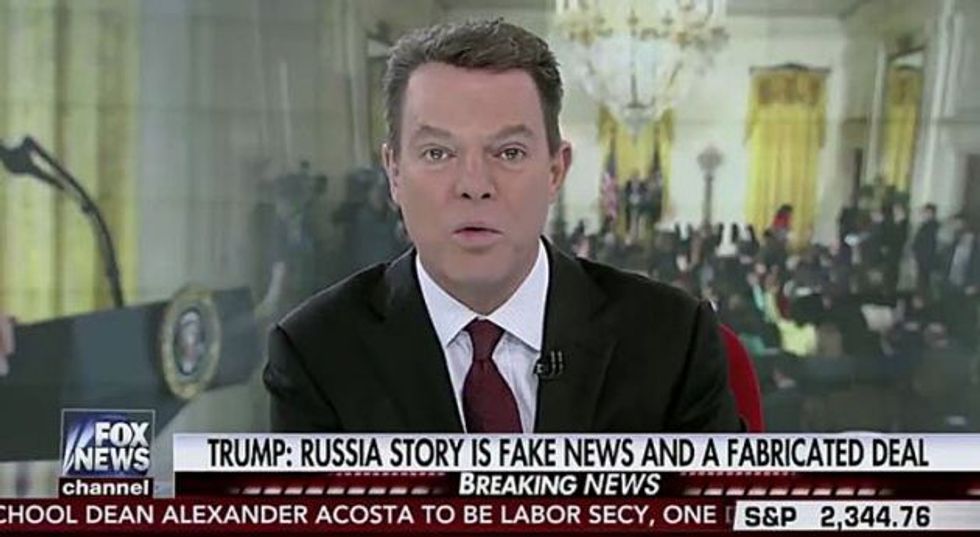 Smith defended CNN White House Correspondent Jim Acosta after Trump singled him out for ridicule and told him he had downgraded CNN from "fake news" to "very fake news." Smith also criticized the president for "avoiding" discussion, despite numerous questions from different publications, about a New York Times report which revealed that phone records and intercepted calls of U.S. intelligence agencies show that members of his presidential campaign had repeated communication with senior Russian intelligence officials in the year before the election:

Jim Acosta over there from CNN, an accomplished reporter, a guy I've never met, but a good reporter. [Trump is] treating him like he's—I'm not even going to use the word, I'm not going to give Twitter the love it needs. It's crazy what we're watching every day. It's absolutely crazy. He keeps repeating ridiculous throwaway lines that are not true at all and sort of avoiding this issue of Russia as if we're some kind of fools for asking the question. Really?

Acosta thanked Smith in a tweet shortly after the segment aired.

But Smith did not stop there. He then pivoted to face the cameras in the newsroom and addressed President Trump directly:

Your opposition was hacked, and the Russians were responsible for it, and your people were on the phone with Russia on the same day it was happening, and we're fools for asking the questions? No, sir. We are not fools for asking this question. We demand to know the answer to his question. You owe this to the American people. Your supporters will support you either way. If your people were on the phone with [them], what were they saying? We have a right to know. We absolutely do, and that you call us "fake news" and put us down like children for asking these questions on behalf of the American people, is inconsequential. The people deserve that answer, at very least.

Smith has worked at FOX, the reliably conservative network which galvanized many of Trump's supporters during an often bombastic presidential campaign, since its inception in 1996. His statements, according to GQ's Jay Willis, demonstrate an understanding "that although support for Donald Trump may be a partisan issue, the basic interest in keeping America safe from foreign interference with its elections is not."

Smith's remarks earned a rebuke from Gateway Pundit, a conservative blog which has in the past published unsubstantiated reports and spread conspiracy theories (and to which Trump recently granted White House press credentials): "Calling Jim Acosta of CNN a good reporter takes a lot of credibility away from Shepard Smith," writes blogger Ryan Saavedra. "Acosta was the obnoxious reporter who interrupted President Trump repeatedly a few weeks back. Like Megyn Kelly, it is time for Shepard Smith to leave Fox News and go join a failing news network like NBC."