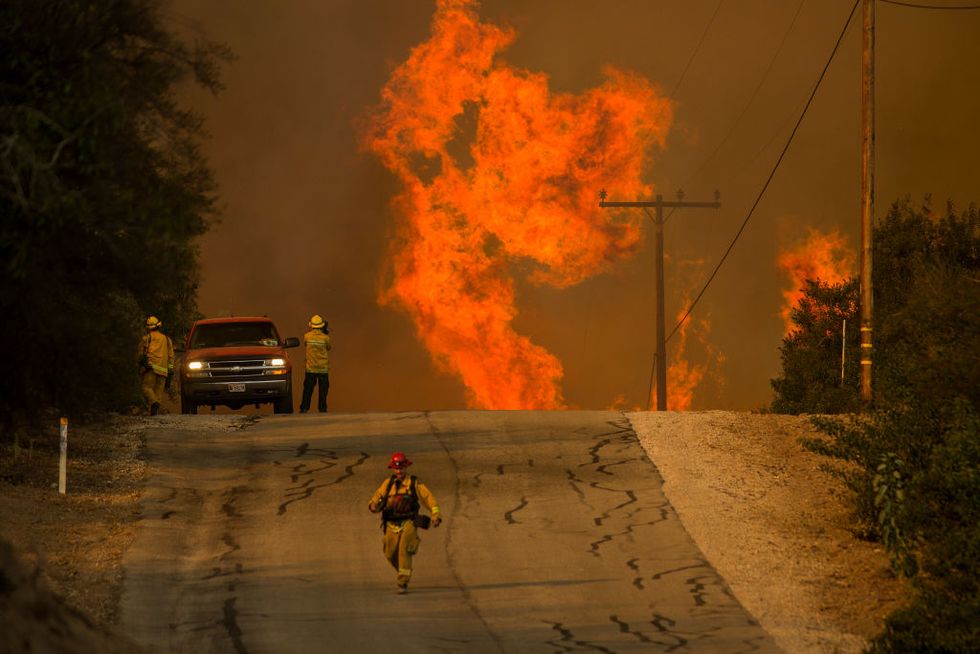 For years, climate scientists have predicted a future marked by hell and high water, and 2017 will be remembered as the year that Mother Nature provided us with textbook examples. Last year was the second hottest on record, and it reached that rarified status without the presence of the heat-boosting El Niño Oscillation in the Pacific. Our atmosphere now has a sustained 403 parts per million (ppm) of carbon dioxide, jumping past 410 ppm line last April for a short time. The last time that CO2 broached this level was several million years ago, when sea level was dozens of feet higher.

Global warming is elementary science. Warming sunlight is supposed to bounce into space after it hits the Earth, but greenhouse gases act like a blanket, absorbing additional heat from sunlight as it leaves. With increasing greenhouse gas emissions, we’re adding more “blankets” to the planet, and significantly affecting weather patterns. Rising temperatures are the most obvious change, but wetter places get wetter still, dry places become parched, and storms grow far more intense.

In years past, climate scientists were quick to admonish anyone who conflated climate with weather, but the barrier separating the two is slowly dissolving. With ever-improving climate modeling and powerful computers to do the heavy lifting, the climate change signature once hidden in disastrous weather patterns is becoming increasingly easy to discern. Climate scientists — and insurance and real estate companies — are tracking disasters with the understanding that life in many regions is growing increasingly precarious, and that climate change is to blame.

A man uses a handmade boat to reach his water-logged home in Sriwulan village, Sayung sub-district of Demak regency, Central Java, Indonesia on February 2, 2018. Local Marine and Fisheries office said the tidal flooding was caused by coastal abrasion due to the disappearing mangrove forests over the last 20 years. (Eko Siswono Toyudho/Anadolu Agency/Getty Images)

In fact, climate change might better be called climate chaos. When you add enormous energy to weather systems, you cause them to act unpredictably. And it’s only going to get worse, much worse, from here.

The world’s only superpower, the United States, should be rethinking its decision to withdraw from the Paris Climate Accords based on what went down within its own borders in 2017. Sixteen climate-influenced weather disasters cost the US economy more than $1 billion each — more than three times the modern average, allowing for inflation. Huge swathes of the country are still suffering horribly.

For the first time on record, three category 4 hurricanes made landfall — Harvey, Irma, and Maria — wreaking unspeakable havoc that will require years to make right. Indeed, more than 125 days after Maria destroyed Puerto Rico, more than one million people are still without power, thousands are living in shelters, drinking water is a scarce commodity, and the healthcare system is imploding. Houston has more wherewithal to rebuild, but not the workforce, so the pace of reconstruction comes in fits and starts. Fires ravaged California and Washington states, and the cost is still being calculated. Droughts in North and South Dakota continue to stress farmers and ranchers, dampening yields, and cutting government’s tax revenues.

In fact, the total weather-related cost to the American economy in 2017 now stands at more than $300 billion, or about 1.5 percent of GDP. For context, The Week’s Ryan Cooper explains, that’s enough money to give every American parent an annual child allowance of $3,600 and change.

And yet America, the country that bears the historical burden as the worst emitter of greenhouse gases — with 27 percent of the world’s total carbon emissions since the Age of Steam to present — is doing all that it can at the federal level to be a global villain. It’s the only country not committed to the Paris Accords.

Other nations are working hard to enact policies to reduce emissions because they’ve been suffering from climate tragedies for years, and 2017 was appalling by most measures. And since the world still hasn’t grappled with the hard decisions that need to be made, the headlines aren’t going to improve in our lifetimes.

After flooding washed out entire regions in India, Nepal, and Bangladesh, the need for international aid is beyond comprehension. Governments in many developing regions simply can’t adequately help their people when tragedy after tragedy rises to historical proportions.

In Bangladesh, more than 700,000 homes were damaged or destroyed in the worst flooding in two generations, and 12 million acres of farmland inundated. Roads, of course, were rendered impassable, and the worry is that hunger in the region, where many barely subsist, will lead to a widespread food shortage and famine. Although the death toll has not risen as high as it did in previous generations, that better reflects a somber fact — more than 60 million refugees have abandoned the country over the last generation rather than struggle against impossible conditions.

In India, climate change is altering monsoon patterns to make them far less predictable, increasing the likelihood of severe storms even during the dry season. In 2017, Mumbai and various northerly regions were nailed by expected and unexpected rains that brought inconceivable destruction. More than 31 million people were affected, and 800,000 homes were flooded or washed away. As India attempts to build on recent economic successes to lift many out of abject poverty, it’s two steps forward, and two steps back.

In Nepal, a far less populous, more isolated mountainous country, 90,000 homes were destroyed by severe weather, and more than 100,000 residents are struggling with a devastated landscape, with 26 of 75 regions under water or isolated by landslides at the height of the widespread South Asian flooding.

Nepalese bystanders try to clear a road after a fatal landslide in Chitwan district, some 97 km from Kathmandu on April 3, 2017. (STR/AFP/Getty Images)

In Australia, no one was worried about floods washing out roads, but many roads have been unpassable just the same. As the country struggles through another record-setting year of heat, highways in several regions have melted and become impassable. The truth is that asphalt is just like toffee — hard and brittle in cold weather, and soft and melty as the temperatures rises. It certainly isn’t common, but neither is it rare.

Those same scorching temperatures are one reason why huge swaths of Australia’s Great Barrier Reef are bleaching— turning white and lifeless with surprising rapidity.  Many prominent scientists are worried that one of the world’s iconic natural treasures will not survive another generation.

The high Arctic continues to change at breathtaking rate because of a process called polar (or Arctic) amplification — first predicted by climate models a generation ago, and now easily detected in the natural world. In a nutshell, when the Earth’s temperature rises, the greatest increase will occur at the North and South Poles. Polar amplification started as a saunter, but it has since becoming a frightening sprint. Right now, temperatures are rising in the Arctic and in Antarctica at a rate twice that of the global average.

The result is an Arctic landscape that has changed drastically in just a decade. Permafrost is thawing at a profound and frightening clip, and seawater is warming and arctic ice melting at a rate that hasn’t been seen in 1,500 years.

Unfortunately, unlike Vegas, what happens in the Arctic doesn’t stay in the Arctic. When permafrost melts, it wreaks havoc with roads and infrastructure throughout the region, leading to expensive repairs. But permafrost is also a carbon sink extraordinaire; nearly half of our planet’s stored carbon is found in the far north. In fact, far more carbon is stored in the permafrost than the atmosphere. As the tundra warms, microbes feast on a carbon buffet, releasing CO2 into the atmosphere that could conceivably lead to runaway global warming that humanity would be powerless to stop.

If you had a bitterly cold holiday season, you can blame polar amplification. In 1979, 45 percent in the Arctic was composed of very thick sea ice that scientists thought would resist change for generations even if the planet warmed dramatically. In 2017, only 21 percent of sea ice is thick, meaning that 79 percent of the polar ice freezes and melts every year. It matters. Warming Arctic waters are believed to affect the jet stream which, of course, sets weather patterns for much of the Northern Hemisphere. Scientists believe that the Arctic warming so affected the jet stream in last year that it almost made California’s wildfires a foregone conclusion, and contributed to the polar vortex that made the eastern half of North America shiver after Christmas and well into the New Year.

In Antarctica, one event in 2017 dwarfed all others: a trillion ton hunk of ice the size of Delaware broke off the Larsen C ice shelf. Not every climate scientist was convinced that warming waters were the culprit, because the break occurred in winter, unlike the calving at the nearby Larsen A and Larsen B shelves. But most scientists agree that the heat being absorbed by our oceans is beyond frightening, and the climate change signature in Larsen C will probably become apparent in time. As an ice shelf — arctic sea ice already floating on water — Larsen C won’t appreciably raise sea levels. But it’s the plug holding back vulnerable ice sheets (on land) that will raise sea levels by more than nine feet. This is the news story that will inform thousands of news stories in the coming century.

In Africa, climate change comes in the form of unrelentingly scorching temperatures, desertification, and drought, and the last few years have brought increased misery. Just as with some parts of Southern Asia, where poverty can be rife, people live in poorly constructed metal houses that exacerbate extreme heat, raising the death toll among children and the elderly to unspeakable levels, reducing life expectancy. Another truth is that desertification decreases the overall amount of arable land, leading to armed conflict that can displace millions, as it did with Darfur.

In 2017, famine was declared for South Sudan, with Yemen, Somalia, and Nigeria not far removed. To help define the problem, three million people in Somalia — half the population — are at risk for severe food shortages. According to several development agencies, the need for humanitarian aid throughout the continent is unprecedented, and that has forced indices of world hunger to rise for the first time this century. To help illustrate the scale, Uganda accepted nearly one million refugees from Sudan early in the year, essentially creating the world’s largest such camp in the space of months.

Many other countries struggled, too. Zimbabwe suffered through a downgraded cyclone carrying unprecedented moisture that left thousands homeless, and killed close to 200 people. Parts of Freeport, the capital of Sierra Leone, were buried by mud after heavy rains left more than 600 dead, and ten times that number homeless.

In South America, Peru was first out of the gate, with heartbreaking floods triggered by unusually warm waters off the Pacific Coast that carried torrential rains inland. More than 150 Peruvians were killed, and more than one million saw their lives upended. In Colombia, torrential rains wiped out whole communities in some of the country’s poorer regions.

In Chile, climate change is exacerbating drought conditions, and wildfires burned for almost three months in the last weeks of 2016 and into 2017, destroying more than 1.2 million acres of land.

This is our legacy.

For centuries, the Tragedy of the Commons has been at play on regional scales, but now we’re seeing the effect of that economic theory on a global scale with a planetary disruption of weather patterns. Now we are enduring a common tragedy that should make everyone who draws breathe take notice.

It requires hard, difficult decisions and a new way of living. But, as 2017 proved, we literally have no time left to lose.