Alexandria Ocasio-Cortez Just Savaged Republicans for Their Opposition to the Green New Deal In an Epic Rant, and We Are Not Worthy 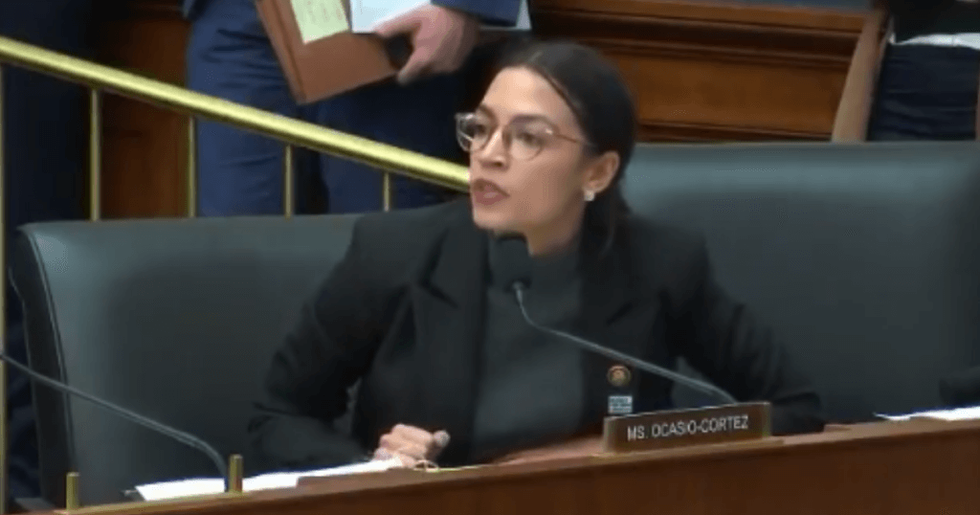 AOC had encouraged her colleagues to vote 'present' because McConnell tried to "rush" a vote without holding a hearing on the Green New Deal - a series of proposals aimed at spurring investment in a sustainable future.

Speaking in the House chamber, Ocasio-Cortez railed against Republicans, who remain the only major political party in the world to maintain a fierce rejection of climate science and who have characterized support for the Green New Deal as "elitist."

"I just got health insurance for the first time a month ago," AOC said. "This is not an elitist issue, this is a quality of life issue."

People in poorer neighborhoods are suffering.

"You want to tell people that their concern and their desire for clean air and clean water is elitist? Tell that to the kids in the South Bronx, which are suffering from the highest rates of childhood asthma in the country. Tell that to the families in Flint, whose kids' blood is ascending with lead levels. Their brains are damaged for the rest of their lives. Call them elitist."

AOC's claims are backed by studies that show kids in the Bronx have insanely high rates of asthma.

Republicans simply are not taking the threat of climate change seriously.

"People are dying," she said. "And the response from across the aisle is to introduce an amendment five minutes before a hearing and a markup? This is serious. This should not be a partisan issue. This is about our constituents and all of our lives."

"Broad swaths of the Midwest are drowning right now under water. Farms, towns, that will never be recovered and never come back, and people are more concerned about helping oil companies than helping their own families? I don't think so."

AOC laid it all out. Beautifully.

"Science should not be partisan," Ocasio-Cortez said. "We are facing a national crisis, and if we do not ascend to that crisis... if we tell the American public that we are more willing to invest and bail out big banks than we are willing to invest in our farmers and our urban families, then I don't know what we're here doing."

Watch AOC's impassioned defense of the GND below:

AOC then warned of the dangers that climate inaction poses to all of us.

We have had decades to prepare.

"The government knew that climate change was real as far back as 1989 when NASA was reporting this. The private sector knew way back in the 1970s," AOC noted. "So we had til around the time I was born to address this issue... for the entire 30 years of my lifetime, we did not make substantial investment to prepare our entire country for what we know was coming."

"We talk about cost—we’re going to pay for this whether we pass a Green New Deal or not. Because as towns and citie… https://t.co/cgaCXWEuOI
— Brian Tyler Cohen (@Brian Tyler Cohen) 1553651372.0

@briantylercohen @AOC Spot on and keep speaking...there are more people in America that think of others and our env… https://t.co/SEDC45u9YA
— SadieBuddy (@SadieBuddy) 1553649007.0

Other Democrats joined in AOC's condemnation of Republican tactics.

"Republicans want to force this political stunt to distract from the fact that they neither have a plan nor a sense of urgency to deal with the threat of climate change," Senate Minority Leader Chuck Schumer (D-NY) said on the Senate floor.

Republicans, meanwhile, have stooped to mocking the Green New Deal and the science of climate change.

On Tuesday, Senator Mike Lee (R-UT) gave an utterly bizarre speech on the Senate floor Tuesday afternoon mocking the Green New Deal by invoking an image from Star Wars: The Empire Strikes Back.

Lee presented an image of Luke Skywalker riding a tauntaun – the camelesque animal on Hoth that Skywalker slaughtered to shelter Han Solo – to make an argument against adopting climate-friendly policies.

“I rise today to consider the Green New Deal, with the seriousness it deserves,” Lee said. “In a future without air travel, how are we supposed to get around the vast expanses of, say, Alaska, during the winter? I’ll tell you how. Tauntauns, Mr. President.”

@briantylercohen @AOC And the other side is championing Mike Lee’s meme game about riding dragons and having babies or whatever. 🤦🏻‍♀️
— laura (@laura) 1553691267.0

@briantylercohen @AOC meanwhile, the senator from Utah is drawing up another cartoon of him on a dinosaur in his spare time.
— Mick Turner (@Mick Turner) 1553691931.0

According to the United Nation’s Intergovernmental Panel on Climate Change (IPCC), located on Earth, humanity has about 12 years to change its habits or we risk irreversible climate catastrophe. Their latest report aligns with thousands of studies and reports going back decades warning about the hazards of continued carbon pollution.

Here is an excerpt latest from the IPCC because facts matter:

“The report finds that limiting global warming to 1.5°C would require “rapid and far-reaching” transitions in land, energy, industry, buildings, transport, and cities. Global net human-caused emissions of carbon dioxide (CO2) would need to fall by about 45 percent from 2010 levels by 2030, reaching ‘net zero’ around 2050. This means that any remaining emissions would need to be balanced by removing CO2 from the air.”

A global increase of two degrees Celsius is considered by most scientists to be a ‘point of no return’ for the climate. Estimates from the Trump administration predict a rise in global temperatures by as much as 4C by the end of the century if humanity continues to dump carbon into the environment at our current rate.