U.S. Special Forces Soldier in Syria Says 'I Am Ashamed for the First Time in My Career' After Trump's Syria Withdrawal

We have a feeling he's not alone. 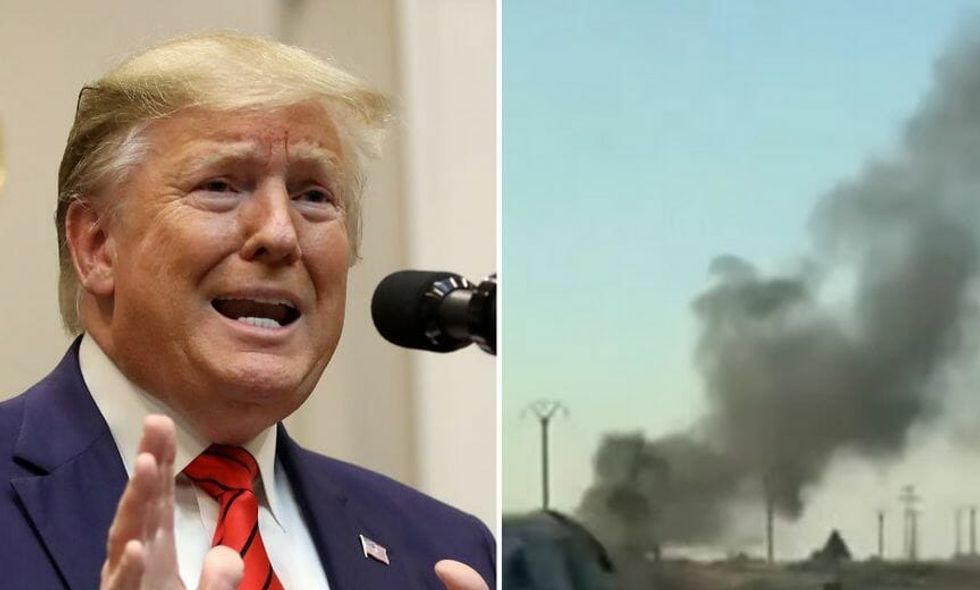 President Donald Trump continues to face bipartisan backlash for his decision to withdraw U.S. special forces from Northern Syria, leaving Syrian Kurdish allies—11,000 of whom died helping American soldiers fight against ISIS—vulnerable to an attack from neighboring Turkey. The move could also lead to a resurgence of ISIS and the thousands of Islamic State prisoners in Kurdish custody.

Within days of the withdrawal, Turkish forces launched an attack on Syria, leaving numerous civilians dead.

Trump continues to double down on the deadly decision, justifying it with claims that the Kurds didn't help the U.S. in World War II, that the Kurds and Turks are "natural enemies," and that the thousands of ISIS prisoners in custody in the region will escape to Europe and therefore won't pose a threat to Americans.

Now, an unnamed U.S. Special Forces soldier, who fought alongside Syrian Kurds, is sounding off to Fox News, saying:

"I am ashamed for the first time in my career."

Fox News National Security Correspondent Jennifer Griffin described her call with the soldier, whom she said was "distraught."

I just spoke to a distraught US Special Forces soldier who is among the 1000 or so US troops in Syria tonight who i… https://t.co/bMeqZsd3gj
— Jennifer Griffin (@Jennifer Griffin) 1570658578.0

This veteran US Special forces soldier has trained indigenous forces on multiple continents. He is on the frontline… https://t.co/NStd2eVQjl
— Jennifer Griffin (@Jennifer Griffin) 1570658579.0

The Kurds, according to the soldier, haven't left their posts guarding ISIS prisoners, even preventing an imminent prison break.

This American soldier told me the Kurds have not left their positions guarding the ISIS prisoners. In fact "they pr… https://t.co/CxAffWZecu
— Jennifer Griffin (@Jennifer Griffin) 1570658579.0

The soldier still predicted that many of the imprisoned ISIS fighters will be free sooner rather than later.

Acc to this US soldier on the ground tonight in Syria: "The Kurds are as close to Western thinking in the Middle Ea… https://t.co/YI3YqBSVl6
— Jennifer Griffin (@Jennifer Griffin) 1570658579.0

This US Special Forces soldier wanted me to know: "The Kurds are sticking by us. No other partner I have ever dealt… https://t.co/uxihxIw2TH
— Jennifer Griffin (@Jennifer Griffin) 1570658579.0

Many Americans agree with the soldier's assessment.

@JenGriffinFNC Trump has done so many horrendous things since elected but this surpasses ANYTHING in my mind. All o… https://t.co/Z5z1mbcjld
— Stephanie (@Stephanie) 1570660867.0

@JenGriffinFNC @AndreaSpenco A friend of mine is retired Army living near Ft. Bragg. He has said that EVERYONE, esp… https://t.co/OlVkfSXtM0
— Betty Boogaloo (@Betty Boogaloo) 1570661369.0

@JenGriffinFNC @JuliBunting I fear there will be many returning US military personnel who will carry the guilt impo… https://t.co/y5YWHQvA54
— Beverly Keller (@Beverly Keller) 1570661890.0

The President continues to defend the decision by claiming we never should have been there in the first place.