Greta Thunberg Threw Donald Trump a Fierce Stare the Moment She Saw Him at the U.N. and Now It's a GIF 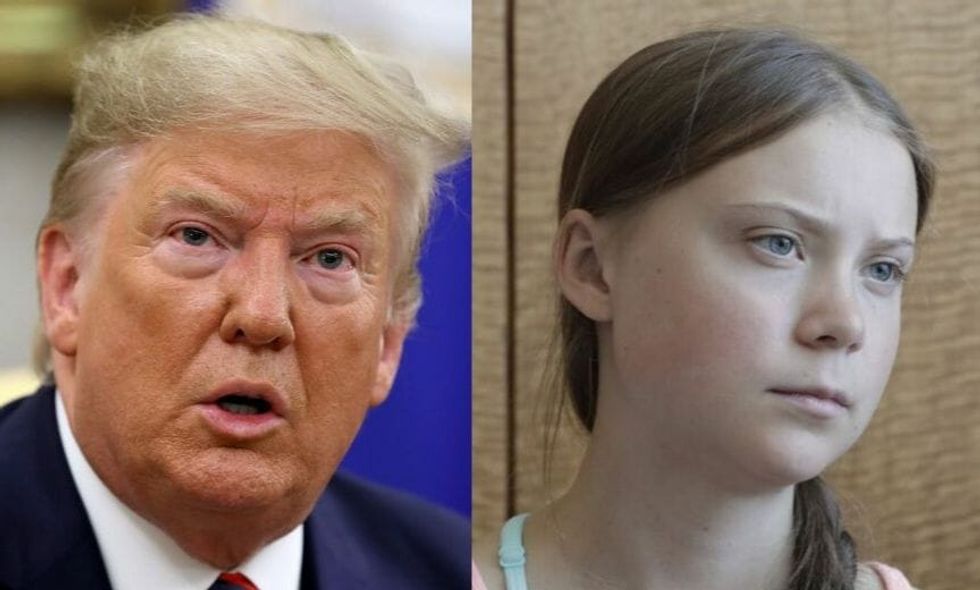 Fresh off of spearheading the Global Climate Strike, which saw millions of participants around the world, 16-year-old climate activist Greta Thunberg arrived at the United Nations General Assembly for a climate summit, continuing her efforts to engage world leaders in the fight against the climate crisis.

There was another notable figure there too: President Donald Trump.

Trump's administration has been no friend to the planet. He once said that global warming was a hoax invented by the Chinese. He's rolled back endangered species protections, clean water policies, and slashed environmental accountability for various industries in the name of deregulation. He pulled out of the landmark Paris Climate Accord and slashed nearly a hundred other environmental protections.

So it's no surprise that Thunberg would react with this face upon seeing him, captured perfectly in this epic GIF:

But Thunberg did more than just give a look. In a rousing answer regarding her message to world leaders, Thunberg took them to task for the global inaction regarding the climate crisis.

”People are suffering, people are dying, entire ecosystems are collapsing. We are in the beginning of a mass extinc… https://t.co/NATzTjhQFw
— WIRED (@WIRED) 1569254856.0

"This is all wrong. I shouldn't be up here. I should be back in school on the other side of the ocean. Yet, you all come to us young people for hope. How dare you? You have stolen my dreams and my childhood with your empty words, and yet, I'm one of the lucky ones. People are suffering. People are dying...And all you can talk about is money and fairytales of eternal economic growth. How dare you?"

Trump stayed at the UN climate summit for approximately 15 minutes.

People could relate to the look she gave Trump.

Greta Thunberg’s glare at Donald Trump is giving me the energy to get through this Monday https://t.co/xdM0rdI2ln
— Sam Stryker (@Sam Stryker) 1569257302.0

Thunberg has previously said she feels no need to meet Donald Trump. His apathy for the environment and the inaction of world leaders everywhere doesn't seem to dampen Thunberg's resolve in the least.

You can purchase Thunberg's book, No One Is Too Small to Make a Difference, here.