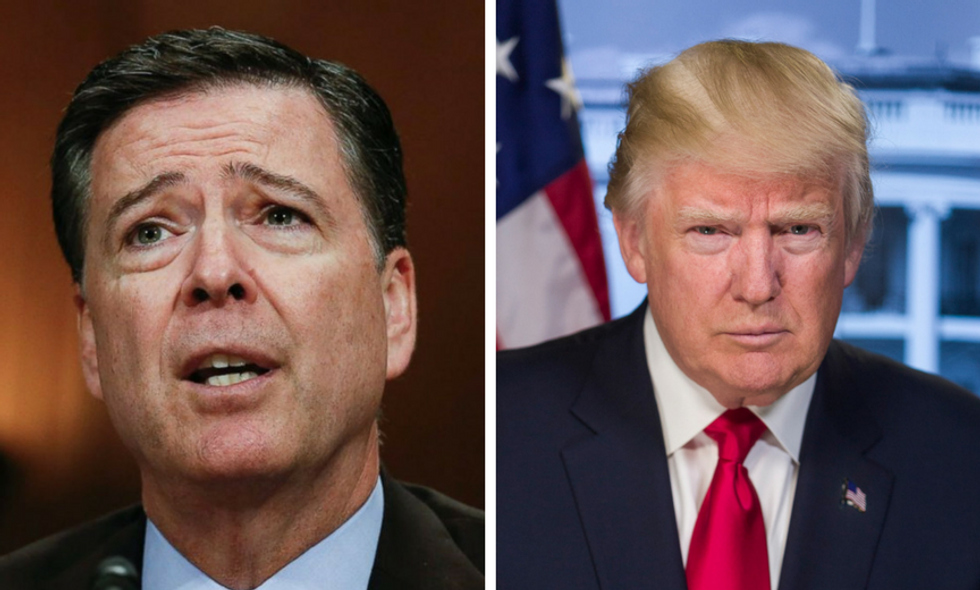 In a surprise move, Wednesday evening the Senate Intelligence Committee posted former FBI Director James Comey's prepared opening remarks online, the night before he was set to appear in front of the committee at a public hearing in the Trump Russia probe.

In his remarks, Comey documents several meetings with President Trump, during which Trump asked for his loyalty, asked him to drop the case against former National Security Adviser Michael Flynn, and made Comey suitably uncomfortable that he felt compelled to document every interaction he had with the President.

Particularly damning for Trump is Comey's recollection of their February 14th meeting, during which Trump asked him to drop the probe into Flynn:

And then an April 11th phone call during which Trump asked Comey how to make public that he was not under investigation:

'Because I have been very loyal to you, very loyal; we had that thing you know.' I did not reply or ask him what he meant by 'that thing.' I said only that the way to handle it was to have the White House Counsel call the Acting Deputy Attorney General. He said that was what he would do and the call ended."

Many feel that what Comey reveals in his opening testimony alone is grounds for an obstruction of justice case against Donald Trump.

Comey proved what Director of National Intelligence Daniel Coats and National Security Agency Director Michael S. Rogers carefully avoided admitting in their testimony on Wednesday — that the president had specifically attempted to shut off at least a major piece of what Trump calls the “Russia thing,” the investigation into the misleading statements by fired national security adviser Michael Flynn concerning his role in dealings with the Russians. This kind of presidential intervention in a pending criminal investigation has not been seen, to my knowledge, since the days of Richard Nixon and Watergate.

Former ethics czar under President Obama, Norm Eisen, concurs, saying on CNN that "This moves us into the same realm as Nixon's obstruction, maybe worse."

This is an important comparison since the first article of impeachment drawn up against Nixon, which ultimately led to his resignation from office, was obstruction of justice.

Comey’s statement lays out a case against the president that consists of a tidy pattern, beginning with the demand for loyalty, the threat to terminate Comey’s job, the repeated requests to turn off the investigation into Flynn and the final infliction of career punishment for failing to succumb to the president’s requests, all followed by the president’s own concession about his motive. Any experienced prosecutor would see these facts as establishing a prima facie case of obstruction of justice.

Rep. Adam Schiff, ranking member of the House Intelligence Committee, said on CBS News this morning that "If you were prosecuting a case of obstruction, you would admit the entirety of James Comey's testimony."

Chris Hayes summed up where we are ahead of Comey's testimony:

The President told the director of the FBI to lay off his close aide, lied about doing so and fired the director when he persisted.
— Chris Hayes (@Chris Hayes) 1496878934.0

Comey's testimony in front of the Senate Intelligence Committee is set to begin at 10:00AM on Thursday, June 8 and will be streamed live here.