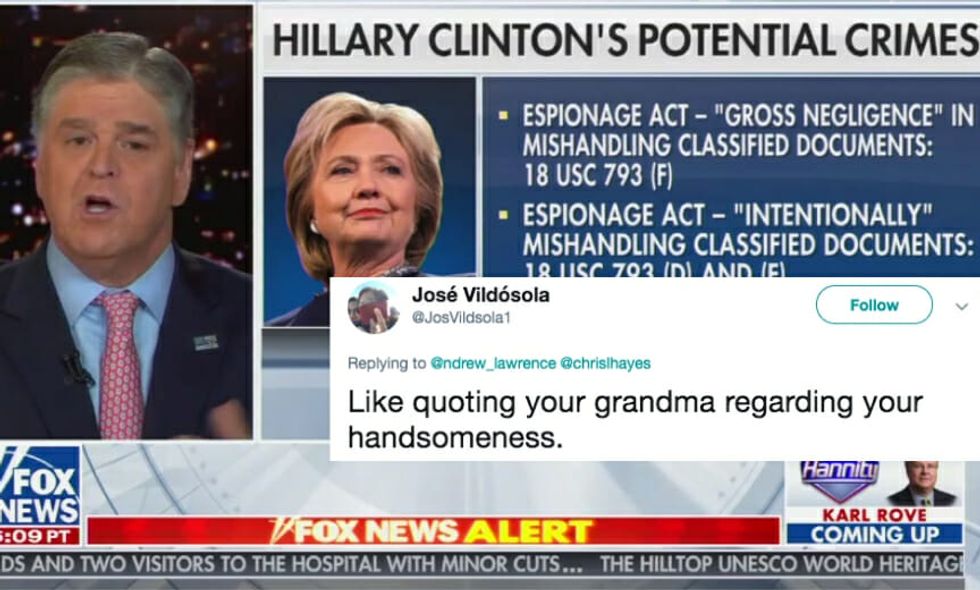 Fox News has come under fire for questionable graphics and sources before, and the latest example of the network's fast and loose relationship with facts is receiving considerable backlash online.

A graphic shown during Fox News personality Sean Hannity's program presents an opinion on Hillary Clinton's "potential crimes" related to her use of a private email server during her tenure as Secretary of State. The graphic purports that Clinton is likely guilty of two violations under the Espionage Act, including "gross negligence" in mishandling classified documents and "intentionally" mishandling classified documents. (Clinton was never prosecuted and Department of Justice's Office of the Inspector General's report found no evidence of political bias and supported the FBI and DOJ's decision not to prosecute her.)

But this "expert" opinion didn't come from a legal analyst at all: It came from pro-Trump commentator Gregg Jarrett, himself a Fox employee.

Naturally, this made Fox the subject of considerable derision.

@ndrew_lawrence @chrislhayes Whenever I prep a legal brief, I ALWAYS cite a lesser Fox contributor, it lends the hi… https://t.co/fBdWi3gFls
— robinmcstay (@robinmcstay) 1555554491.0

Jarrett has often defended President Donald Trump over the course of Special Counsel Robert Mueller's investigation into whether Trump and his campaign colluded with Russian operatives to subvert the 2016 presidential election. He has called for Clinton's to be investigated by a grand jury over her email controversy; however, when a grand jury was impaneled by Mueller in the investigation into Russian interference, Jarrett referred to grand juries as an "undemocratic farce."

Jarrett has taken his vendetta against Clinton even further: He is the author of The Russia Hoax, which alleges that "Hillary Clinton’s deep state collaborators in government" engaged in "nefarious actions" to undermine Trump and bolster Clinton's candidacy. In 2018, Politifact highlighted several claims Jarrett made in the book––including his suggestion that the collusion investigation was "effectively over"––and highlighted them as false and misleading.

Despite this, President Trump has endorsed Jarrett––and his rather flattering book––more than once.

The book's unsubstantiated claims were further picked apart by book critic Carlos Lozada, who in a review for The Washington Post, observed:

"Jarrett argues by adverb: Attacks on Trump are “transparently partisan” or “patently absurd”; his opponents are “arguably corrupt”; Clinton “plainly violated” multiple laws. Jarrett’s more persuasive moments — such as his contention that Deputy Attorney General Rod Rosenstein is too much a part of the events involved in an obstruction-of-justice investigation to also supervise that investigation — are overwhelmed by his leaps of logic. Jarrett suggests that Trump could not have obstructed justice in the Russia investigation because, well, he is innocent: “If the president knew he did nothing wrong, it makes little sense that he would try to impede a probe into no wrongdoing.” Yes, of course, if your premise is that the president is blameless, the conclusion that he remains so does follow."

Hannity's coverage of Clinton's "crimes" came on the eve of Attorney General William Barr's release of the redacted Mueller report, to which Fox News, often accused of ignoring important stories to instead curry favor with the president, dedicated little airtime.

Democrats have demanded to see the full and unredacted report. Five House Democratic committee chairs in a joint statement slammed Barr’s decision to hold a press conference before releasing the report.

“With the Special Counsel’s fact-gathering work concluded, it is now Congress’ responsibility to assess the findings and evidence and proceed accordingly,” the joint statement read.