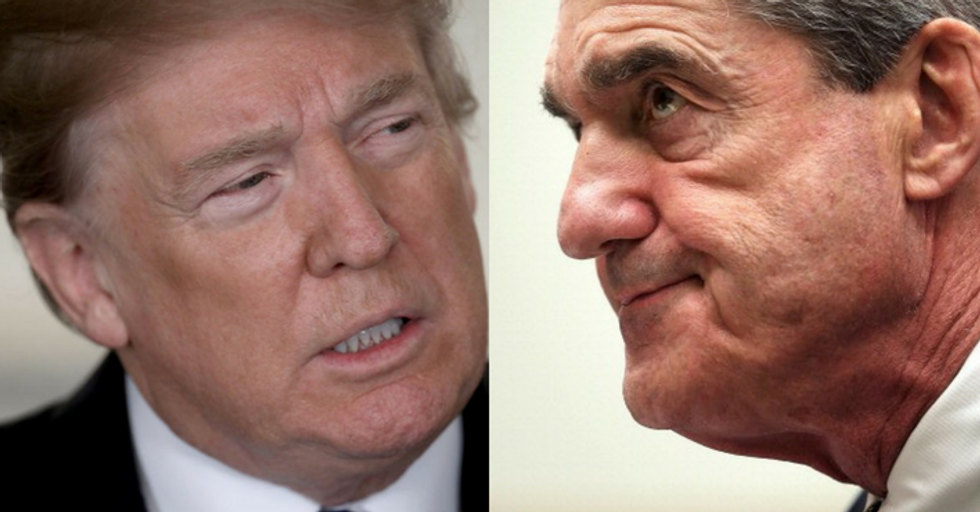 In a new report from The New York Times, three unnamed sources state Special Counsel Robert Mueller —in his duties assigned by the Department of Justice (DoJ)— began examining some of the Twitter posts of President Donald Trump. What are they looking for?

Evidence of obstruction of justice.

Comey stated in his congressional testimony that Trump also privately pressured him and the others in the FBI and DoJ about the investigation. Mueller's review examines whether the actions, including publicly available tweets, equal a willful attempt to obstruct the investigation by intimidating witnesses and pressuring senior law enforcement officials.

The definition of obstruction of justice is:

the crime or act of willfully interfering with the process of justice and law especially by influencing, threatening, harming, or impeding a witness, potential witness, juror, or judicial or legal officer or by furnishing false information in or otherwise impeding an investigation or legal process.

The first Tweets reported to be under review came after Trump fired James Comey in May 2017. That July, Trump tweeted disparaging remarks about the man he hand-picked to be Attorney General.

In it Trump calls Sessions' position on a non-existent crime "weak." According to White House aides, Trump expressed anger at the time over Sessions choice to follow standard ethics guidelines and recuse himself from the investigation into Russian interference in the 2016 presidential election.

Many saw his lashing out at Sessions on Twitter as a sign of that anger. Trump also thought of firing Sessions at the time according to the same sources.

A day later, Trump attacked McCabe, the man who replaced Comey as the acting Director of the FBI from May 9, 2017 until August 2, 2017. In August, he returned to his position as Deputy Director.

In the following tweets, Trump again tried to create a case against Clinton.

McCabe and Sessions both failed to take the bait.

McCabe nor Sessions moved to halt the Russia investigation nor did they create a new investigation into Clinton. A full months long investigation had already completed on Clinton's email server by Congress and the FBI with a finding in both cases of poor security protocol but no criminal action eligible for prosecution.

McCabe stepped down from his position with the FBI on January 29, 2018. Before his resignation, Trump targeted him on Twitter three more times, including a post about McCabe's retirement benefits after 22 years of service in federal law enforcement.

McCabe began his career with the FBI in 1996 in the New York Field Office on the SWAT team.

A second series of tweets highlighted according to the sources center around October 18, 2017. In them, Trump again tries to create a case for a fully investigated non-crime.

...people not interviewed, including Clinton herself. Comey stated under oath that he didn't do this-obviously a fix? Where is Justice Dept?
— Donald J. Trump (@Donald J. Trump) 1508322449.0

As it has turned out, James Comey lied and leaked and totally protected Hillary Clinton. He was the best thing that ever happened to her!
— Donald J. Trump (@Donald J. Trump) 1508324196.0

The posts were made just before Mueller announced the charges pending against former Trump campaign manager Paul Manafort and campaign adviser Rick Gates.

The report did not state if the president's attempts to directly discredit the investigation through his tweets and statements would also be reviewed.