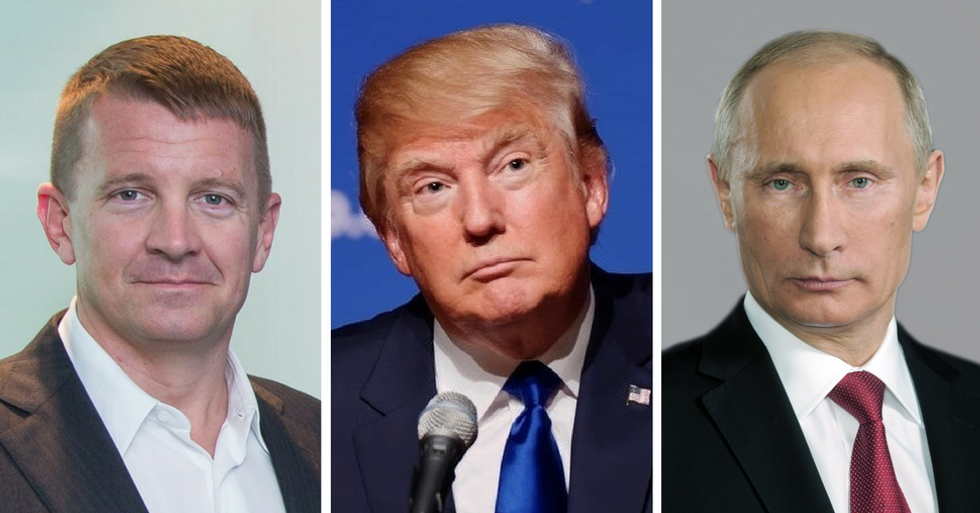 Blackwater founder Eric Prince held a secret two-day meeting in the Seychelles islands in the Indian Ocean with a Russian official close to Vladimir Putin, the Washington Post reports. It was an apparent bid to establish a back channel of communication between the Kremlin and then-president-elect Donald Trump according to the Post.

The meeting took place on January 11, nine days before Trump's inauguration. Officials from the United Arab Emirates (UAE) agreed to broker the meeting to see if Russia might roll back its support of Iran, including in Syria. The Trump administration would likely need to make major concessions to Moscow, particularly on U.S. sanctions, for Russia to do so. The full agenda discussed at the meeting is still unclear, according to U.S., European, and Arab officials who spoke with reporters. The officials said Prince presented himself as an unofficial envoy for Trump to high-ranking Emiratis who set up the meeting with the Russian official, whom they did not identify.

According to U.S. officials, the Seychelles meeting is under FBI scrutiny as part of a broader investigation into Russian interference in last year's presidential election and alleged contacts between Trump associates and the Kremlin. The FBI declined to comment, and the White House, through Press Secretary Sean Spicer, denied the report altogether.

“We are not aware of any meetings, and Erik Prince had no role in the transition,” Spicer said.

A spokesman for Prince also fired back.

“Erik had no role on the transition team. This is a complete fabrication," the spokesman said. "The meeting had nothing to do with President Trump. Why is the so-called under-resourced intelligence community messing around with surveillance of American citizens when they should be hunting terrorists?”

Prince has no official role within the Trump administration, nor did he play a part in the campaign or the transition, though he was seen leaving the Trump transition offices in New York in December. He is, however, one of the president's staunchest supporters, having contributed $250,000 to Trump's campaign, the national GOP, and a pro-Trump super PAC led by Rebekah Mercer, one of the GOP's wealthiest donors. He has ties to Stephen Bannon, the president's chief strategist, appearing as a guest contributor to Breitbart. His sister, Betsy DeVos, is the nation's Secretary of Education.

As the founder of security firm Blackwater, Prince found himself in the national spotlight after a series of U.S. abuses in Iraq made headlines, including the murders of Iraqi civilians in a town square in 2007 which one survivor of the attack described as a "horror movie." Prince later sold the firm, but continues to helm a private paramilitary business empire across the Middle East and Africa.

The Seychelles meeting came after several private discussions in New York involving high-ranking Trump associates with both Moscow and the UAE. Trump has drawn heavy criticism for his sympathetic views toward Vladimir Putin and has vowed to improve U.S.-Russia relations. His administration has acknowledged that his former national security adviser, Michael Flynn, met with Sergey Kislyak, the Russian ambassador to the United States. Flynn resigned in February after The Washington Post reported that Flynn had discussed U.S. sanctions with Kislyak. In his official resignation, he insisted that the “fast pace of events” led him to “inadvertently” give Vice President Mike Pence and others “incomplete information” about his conversations with the Russian ambassador.

Flynn and Trump adviser and son-in-law Jared Kushner, along with Stephen Bannon, met with Abu Dhabi’s crown Prince Sheikh Mohammed bin Zayed al-Nahyan in December, during a trip to New York, according to U.S., European, and Arab officials. Officials only learned of Zayed's visit after his name appeared on a flight manifest. In a breach of protocol, the UAE did not notify the Obama administration in advance of the visit. Zayed reportedly wanted the meeting to be mutually beneficial, believing Trump and the UAE have a common interest in curtailing Russia's relationship with Iran.

Western officials confirmed that Zayed met twice with Putin in 2016, and that he urged Putin to work more closely with the UAE and Saudi Arabia in the hopes of isolating Iran.

"Separating Russia from Iran was a common theme,” said a former intelligence official in the Obama administration who met with Trump transition officials. “It didn’t seem very well thought out. It seemed a little premature. They clearly had a very specific policy position, which I found odd given that they hadn’t even taken the reins and explored with experts in the U.S. government the pros and cons of that approach.”

The Russian official at the Seychelles meeting was a person whom Zayed knew was close to Putin from his interactions with both men, the officials said. The UAE believed Erik Prince had the blessing of the Trump administration to serve as an unofficial representative.

Government officials in the Seychelles said they were not aware of any meetings between Trump and Putin associates in the country around Jan. 11.

“I wouldn’t be surprised at all,” said Barry Faure, the Seychelles secretary of state for foreign affairs. “The Seychelles is the kind of place where you can have a good time away from the eyes of the media. That’s even printed in our tourism marketing. But I guess this time you smelled something.”

Officials acknowledged, however, that the island's luxury resorts are ideal for backroom meetings, an observation shared by Steven Simon, a National Security Council senior director for the Middle East and North Africa during the Obama administration.

“The idea of using business cutouts, or individuals perceived to be close to political leaders, as a tool of diplomacy is as old as the hills," Simon said. "These unofficial channels are desirable precisely because they are deniable; ideas can be tested without the risk of failure.”