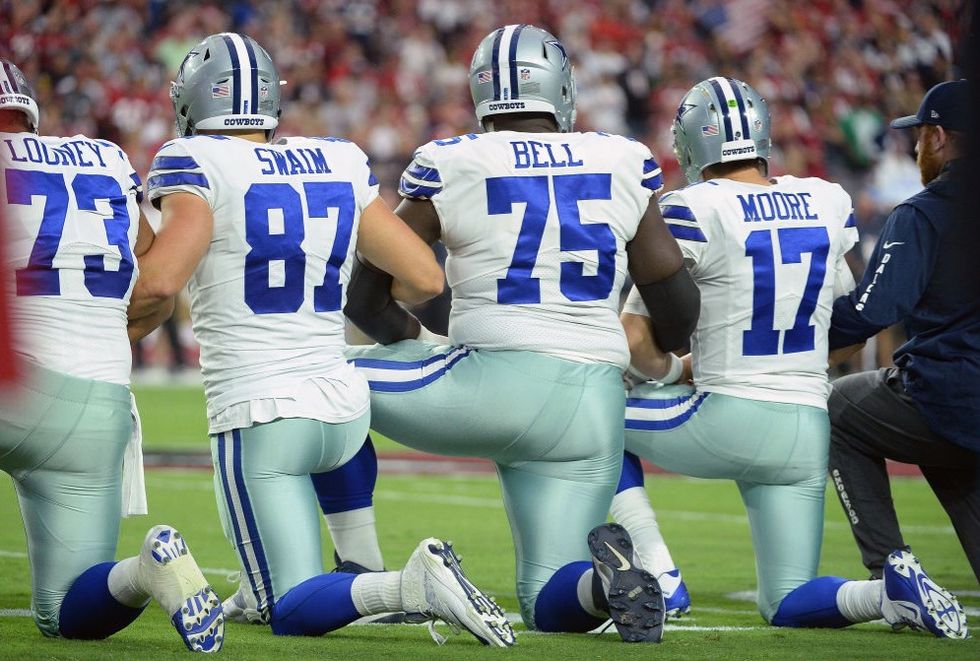 Joe Looney #73, Geoff Swaim #87, Byron Bell #75 and Kellen Moore #17 of the Dallas Cowboys take a knee prior to the national anthem for the NFL game against the Arizona Cardinals at University of Phoenix Stadium on September 25, 2017 in Glendale, Arizona. (Photo by Jennifer Stewart/Getty Images)

These are the 16 names that appear on the cover of Thursday's New York Daily News along with the silhouette of someone taking a knee over a backdrop of the American flag. The headline reads, "NFL DISHONORS THE FLAG."

It is both a powerful and bold statement. And it is protected by the First Amendment of the United States Constitution.

When Colin Kaepernick first took a knee during the playing of the national anthem on the National Football League (NFL) sidelines, according to Kaepernick, he hoped to do the same: make a peaceful yet powerful statement about the state of equal justice under law enforcement in the United States.

After several highly publicized deaths, some marches and protests lead to violence. Those protests were denounced by the media and the public. Why couldn't the protests be peaceful and nonviolent?

Taking a knee to bring awareness seems a perfect answer. Taking a knee during sports is common and kneeling shows deference while still allowing the protest to be seen. Kaepernick and those that followed tried to effect social change or spark a conversation about police brutality.

Somewhere along the way the real reason for this peaceful nonviolent protest got lost. It was and is about the 16 people listed on the Daily News cover, and the many others who are not listed but who shared their fate.

However, some people in the media and politics, mostly White, quickly turned protesting by mostly African-American NFL players against what the players viewed as police brutality and injustice into a protest against the United States flag, against the national anthem, against patriotism, against the military, against everything but what the protest was actually about.

Others, sympathetic to the very real statistic that Black and Indigenous People of Color (BIPOC) die in interactions with law enforcement at a much higher rate than their White counterparts, simply acknowledged the real reason for the protest but stated the choice of protest wasn't the right kind or the right time or the right place.

Statistically, for decades BIPOC die at a percentage alarmingly higher than their population percentage. But what does that mean exactly?

If a racial/ethnic group is 70 percent of the population, if all things are equal, they would also make up roughly 70 percent of a subset of data.

It isn't. Neither are the percentages for African-Americans or Hispanics.

All 16 of those people are dead. Their families, friends, and loved ones are deprived of their presence.

"Say their names..." they have captioned the cover on Twitter. However when posted to Twitter, many of the responses came back the same as before, redefining the protest as: unpatriotic, anti-flag, anti-anthem, anti-military, etc... And again, people deciding what form of peaceful nonviolent protest is appropriate.

However some people are calling them out on it as well.

@NYDailyNews @NFL @Kaepernick7 All the daily news knows how to do is to needlessly provoke and antagonize the publi… https://t.co/vHSZAcjlVh
— Necessary Force (@Necessary Force) 1527132078.0

@NYDailyNews @KatrinaNation @NFL @Kaepernick7 As a veteran I don't feel disrespected by those who kneel to protest… https://t.co/fh66E3MJcM
— She persisted (@She persisted) 1527127262.0

@Jloague @NYDailyNews @NFL @Kaepernick7 They don't care. All they see are African Americans doing something they do… https://t.co/awiXJc2gVQ
— Gina Rosar (@Gina Rosar) 1527165280.0