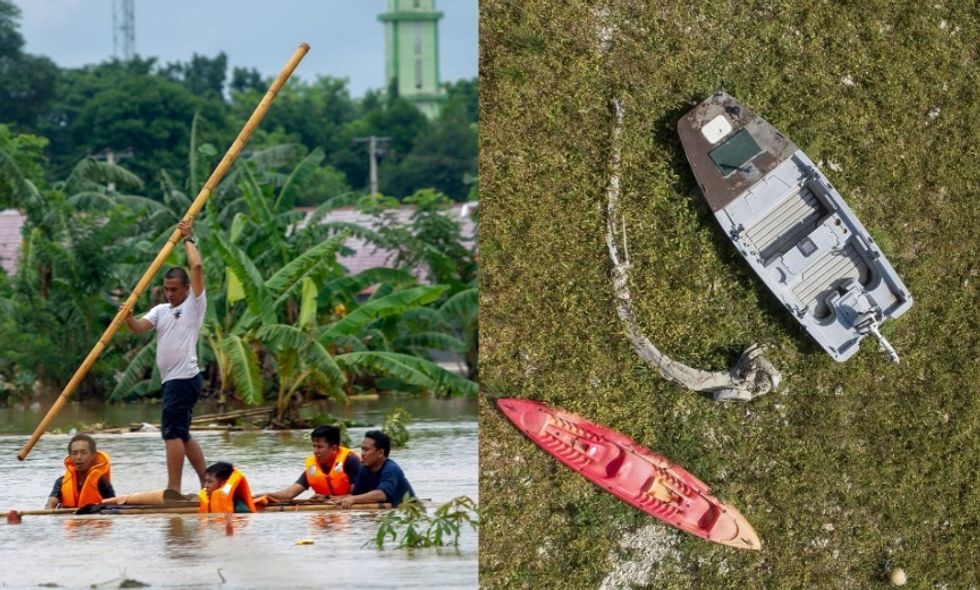 Though many still deny it, climate change poses an existential threat to humanity and other life everywhere.

Shifts in climate are triggering evolutional adaptation in a range of plants and animals, from owls to salmon to thyme to snails to fruit flies.

NBC News reports that over the next few generations, scientists expect humans to follow suit as our bodies evolve internally and externally over ensuing generations to compensate for what will be new normals on Earth's climate.

The most minor changes will likely be in appearance as coastal communities are forced to flee due to rising tides. The World Bank predicts a migration of nearly 150,000,000 by 2050. Differences in skin color could lessen across the world as backgrounds within population groups begin to grow more diverse due to climate-triggered migration.

Certain diseases—like malaria, which requires a tropical climate for the parasites to complete their growth cycle—will see a wider reach as temperatures rise across the globe. This could see an increase in carriers of disorders like sickle cell due to its resistant nature to malaria.

As climate changes affect the ability to grow and harvest food, our digestive systems will likely evolve too. This has occurred in humans in the past. For instance, cattle herding communities in East Africa thousands of years ago evolved the ability to digest lactose.

If climate change continues without intervention, evolution may be humanity's only hope to avoid extinction. In 2009, scientists at McGill University tested this possibility on a number of yeast populations, yielding promising results:

"Hundreds of yeast populations were exposed to normally lethal concentrations of salt in conditions, where the frequency of rescue mutations was estimated and population size was manipulated. In a striking match with theory, we show that [Evolutionary Rescue] is possible, and that the recovery of the population may occur within 25 generations."

But we're running out of time, and though mass migration and digestive evolution have changed populations throughout history, many are dismissing these possibilities and even climate change all together, trusting their own "expertise" over scientific consensus.

@NBCNews @NBCNewsMACH The claims get more outlandish with every point drop of support of this man made hoax.
— @DonInNY (@@DonInNY) 1548843323.0

Though climate change denial is frustrating to many, others are stressing the urgency of an intervention before the damage to Earth is completely irrevocable.

Influential lawmakers from Congresswoman Alexandria Ocasio-Cortez (D-NY) to Presidential candidates and Senators Kamala Harris (D-CA) and Elizabeth Warren (D-MA) are calling for a green new deal that would create hundreds of thousands of jobs in the renewable energy sector while putting the United States on track to lesson its negative environmental impact.

Extreme temperatures. Monster storms. Donald Trump & the GOP might not believe in science, but I do. We need to mak… https://t.co/P1U1HssgfW
— Elizabeth Warren (@Elizabeth Warren) 1548865585.0

I support a Green New Deal. Climate change is an existential threat to all of us, and we have got to deal with the reality of it.
— Kamala Harris (@Kamala Harris) 1548733030.0

No issue is more important for our children and our grandchildren than addressing Climate Change. That’s why I support the Green New Deal.
— Seth Moulton (@Seth Moulton) 1548797787.0

We can and must end the pollution that disproportionately poisons the poor and people of color. We must move forwar… https://t.co/FgBwJYj8VD
— Bernie Sanders (@Bernie Sanders) 1548103215.0

But in order for significant strides against climate change can be made, certain lawmakers denying or dismissing the threat of it have to acknowledge the potential harm. We can only hope that it won't take a disaster that evolution can't fix for humans to start collaborating in an effort to save ourselves.