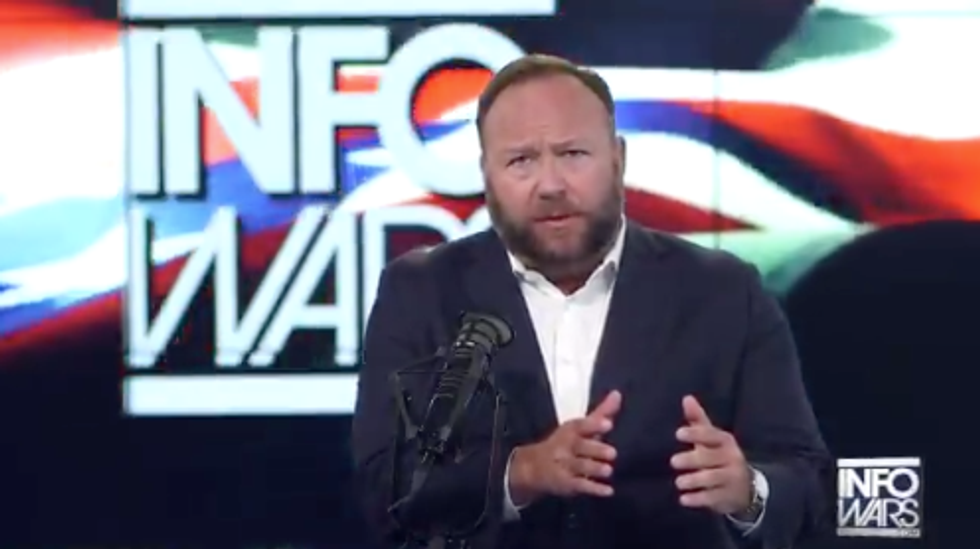 YouTube announced on Monday that it is removing conspiracy theorist and alt-right darling Alex Jones's channel, leaving users who click on his videos with a message: "This account has been terminated for violating YouTube's Community Guidelines."

"When users violate these policies repeatedly, like our policies against hate speech and harassment or our terms prohibiting circumvention of our enforcement measures, we terminate their accounts," a YouTube spokesperson said in a statement.

YouTube said Jones was warned multiple times about its policies but continued to peddle what YouTube considers child endangerment and hate speech.

Jones had previously been placed on a 90-day moratorium but continued to promote his page on other posts, prompting YouTube to ban him entirely.

When users violate these policies repeatedly, like our policies against hate speech and harassment or our terms prohibiting circumvention of our enforcement measures, we terminate their accounts.

Jones responded to YouTube's ban on Monday via Twitter, which has not (yet) taken any public actions against him.

Jones called the ban "communist censorship" and launched into a 4-minute long tantrum about free speech, positioning himself -- and the conservative movement -- as the victim.

And he proceeded to spread conspiracy theories about the "real reason" he was banned from YouTube as well as Apple, Facebook and Spotify:

Jones is claiming that the ban is part of a coordinated effort by "Big Tech" to retaliate against Jones for helping to elect Donald Trump president. So by banning InfoWars, Jones claims that these tech companies are engaging in "election meddling" ahead of the midterm elections.

Of course, Jones is still free to say whatever he wants without fear of persecution from the United States government, however, private media companies are under no obligation to give him a digital mountaintop from which he can spew his destructive rhetoric.

@realbenlyons1 @thehill The government didn’t force him off the internet, private companies who have terms of servi… https://t.co/pR2JzLgI7N
— Andrew Franks (@Andrew Franks) 1533576683.0

Many people are thrilled to see the 9-11 truther get his comeuppance.

Some users said Jones was a "crisis actor," which is a term Jones assigns to victims of tragedies.

@RealAlexJones Fake news. Alex Jones is a crisis actor and InfoWars is just a deep-state conspiracy. If you ever… https://t.co/TyZU2A2PYx
— BruschettaNights🦔 (@BruschettaNights🦔) 1533578675.0

In a statement to CNBC, Google said: "All users agree to comply with our Terms of Service and Community Guidelines when they sign up to use YouTube. When users violate these policies repeatedly, like our policies against hate speech and harassment or our terms prohibiting circumvention of our enforcement measures, we terminate their accounts."

Apple also issued a statement addressing its decision to censure Jones, implying Jones was creating an unsafe environment for its users.

"Apple does not tolerate hate speech, and we have clear guidelines that creators and developers must follow to ensure we provide a safe environment for all of our users," an Apple spokesperson said. "Podcasts that violate these guidelines are removed from our directory making them no longer searchable or available for download or streaming. We believe in representing a wide range of views, so long as people are respectful to those with differing opinions."

Facebook said in a statement that it banned Jones "for glorifying violence, which violates our graphic violence policy, and using dehumanizing language to describe people who are transgender, Muslims and immigrants, which violates our hate speech policies."

Last month, Facebook addressed complaints it was receiving that Jones was violating community standards with his fiery rhetoric and attacks on victims of crimes, such as the families of those killed at Majorie Stoneman Douglas High School in February and at Sandy Hook Elementary School in 2012. Jones has referred to the mass school shootings as "false flag operations" perpetrated by the government.

"All four pages have been unpublished for repeated violations of Community Standards and accumulating too many strikes," the company said in a blog post. "While much of the discussion around Infowars has been related to false news, which is a serious issue that we are working to address by demoting links marked wrong by fact checkers and suggesting additional content, none of the violations that spurred today's removals were related to this."