Texas Veteran With PTSD Explains Why She Made Public a Voicemail She Received From Beto O'Rourke, and Now We're Crying 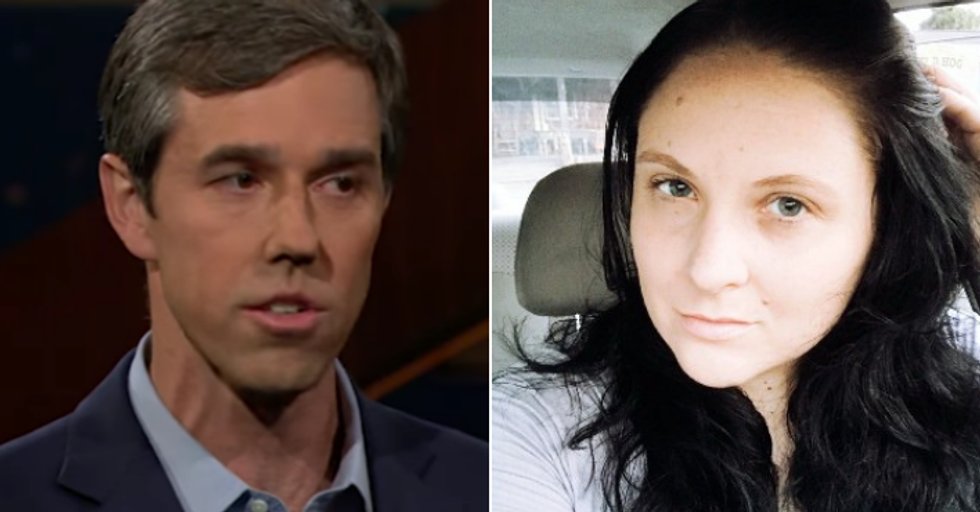 At the end of August, President Donald Trump took to Twitter to give his one-time rival, Republican Senator Ted Cruz of Texas, his standard endorsement message. However, unlike most of his other tweets that include the same phrase touting GOP strength, the President substituted an attack on Cruz's opponent.

In his message, Trump took a shot at El Paso, Texas, native, Democratic Representative Beto O'Rourke. The President called out O'Rourke as "a disaster for Texas - weak on Second Amendment, Crime, Borders, Military, and Vets!"

The slam against O'Rourke's treatment of military veterans prompted one Texan to go public with her own Beto O'Rourke story. United States Marine Corps veteran Lauren Withrow also took to Twitter, on September 4, to tell a very different story of O'Rourke.

Withrow—who suffers from post-traumatic stress disorder (PTSD)—reports for her local paper in Texas, in the 4th smallest county in the state. She describes herself as a small-town reporter, sports journalism enthusiast and single mom. She first met Beto O'Rourke when she interviewed him for her paper.

In a series of seven tweets, Withrow shared her very personal and painful story. Her message eventually made its way to Now This, who turned it into one of their videos. Activists like Alyssa Milano and organizations like Vote Vets have since shared Withrow's story as well.

Watch the Now This video here.

This veteran struggling with PTSD shared a heartfelt voicemail that @BetoORourke left for her to show the country h… https://t.co/818hNApkhy
— NowThis (@NowThis) 1537276680.0

This veteran struggling with PTSD shared a heartfelt voicemail that @BetoORourke left for her to show the country h… https://t.co/zoodXUmM0A
— Alyssa Milano (@Alyssa Milano) 1537294023.0

According to her Twitter thread titled "The Beto O'Rourke I Know", Withrow decided to research O'Rourke after hearing about his work for veterans.

After Withrow tried to end her life and before being admitted to the VA hospital and surrendering her phone, Withrow texted O'Rourke's campaign to ask him to keep fighting for access to mental healthcare for veterans.

After being released from the hospital, Withrow found several texts from O'Rourke's campaign and two personal voicemails from O'Rourke himself.

Withrow said the best way for people to understand the man she knows is to listen to his voicemail to her. She pointed out that his campaign did not know she planned to share his voicemail, but she felt she needed to defend him against attacks claiming he does not care about veterans.

Withrow concluded her message by stating:

"That's why I’m voting for him in November. This is the kind of person I want representing me in Washington D.C. I hope you have the courage to show up too. Tell me about the [Beto O'Rourke] you know."