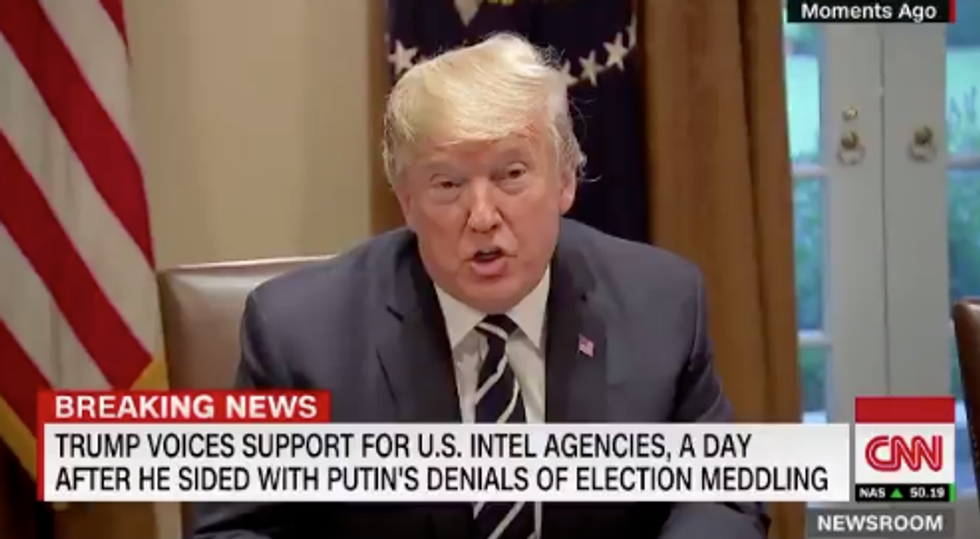 Twenty-four hours after standing beside Russian President Vladimir V. Putin and saying that he doesn't see "why [the meddling of the U.S. election] would be" from Russia, President Donald Trump is walking back his earlier statements and acknowledged that Russia meddled with the U.S. Then, in a pattern that's become rather typical of Trump's concessions, he appeared to contradict himself in the same breath:

Could be other people also, there’s a lot of people out there.

To be clear, Trump still seemed to waffle in his acceptance of U.S. intelligence: "I accept our intelligence commun… https://t.co/4bQ8e6ctfS
— Kyle Griffin (@Kyle Griffin) 1531854309.0

I have felt very strongly that while Russia's actions had no impact at all on the outcome of the election, let me be totally clear in saying...that I accept our American intelligence community’s conclusion that Russia's meddling in the 2016 election took place.

The president did not elaborate on why it took him 24 hours to realize he allegedly misspoke, nor did he mention why he defended his initial words with multiple tweets or an interview with his favorite so-called journalist Fox News' Sean Hannity.

Americans on social media were too outraged to let him off easy.

I just don’t buy the President’s comments today. If he wanted to take a stand on Russian election interference, he… https://t.co/nDnMkoBj6R
— Mark Warner (@Mark Warner) 1531857215.0

Trump looks punch drunk today while he walks back his stupid Putin summit. Plus he is still talking like an eighth… https://t.co/l4GyCqod5C
— Sally Mullikin (@Sally Mullikin) 1531853943.0

Even if Trump walks back every single thing he said today, he has proven that when in a room with Vladimir Putin, h… https://t.co/r7AAJMwani
— Liddle’ Savage (@Liddle’ Savage) 1531782899.0

It’s amazing how small & weak this reveals him to actually be. This should have been corrected immediately yesterda… https://t.co/VnvypwvYnh
— Maggie Hibbs (@Maggie Hibbs) 1531856763.0

The president did not explicitly apologize for the uproar that resulted from what he says was a simple case of misspeaking.

Trump's comments echo with a similar ring as the ones made by the president after Charlottesville and other Trump apologies.

In the aftermath of the Unite the Right rally in Charlottesville, where white supremacists and neo-Nazis erupted in violence against protestors, Trump was criticized for condemning the evil on "many sides." After walking back that comment with a more direct condemnation of white supremacy, Trump again qualified the condemnation by saying that both sides had "very fine people."

Trump demonstrated these behaviors as early as 1989, when he spent approximately $85,000 to take out full page ads in the city's four leading newspapers to endorse the death penalty for the five black and Latino men accused of beating and raping a jogger in Central Park. DNA evidence later exonerated the men beyond a shadow of a doubt. Nevertheless, Trump persisted. As late as 2016, he insisted that the men were guilty, despite the conclusion of the DNA evidence.

Many on Twitter were quick to warn against this pattern of non-apologies.

Like on Charlottesville and now on Helsinki,Trump again hoping his supporters don’t trust their own eyes and ears.… https://t.co/H5CFvAbca1
— Jim Acosta (@Jim Acosta) 1531854298.0

There is one person rising in defense of Donald Trump: David Duke. The same thing happened after Charlottesville. I… https://t.co/sQkAlO95zn
— Peter Wehner (@Peter Wehner) 1531806157.0

Unfortunately, if the past few years is any indication, Trump's words today will most likely be enough to assuage GOP lawmakers and vanquish any doubt it may have given his base. Most likely, this is just another day that will live in infamy.