Polish President Took a Picture With Donald Trump in the Oval Office, Regretted It Almost Immediately 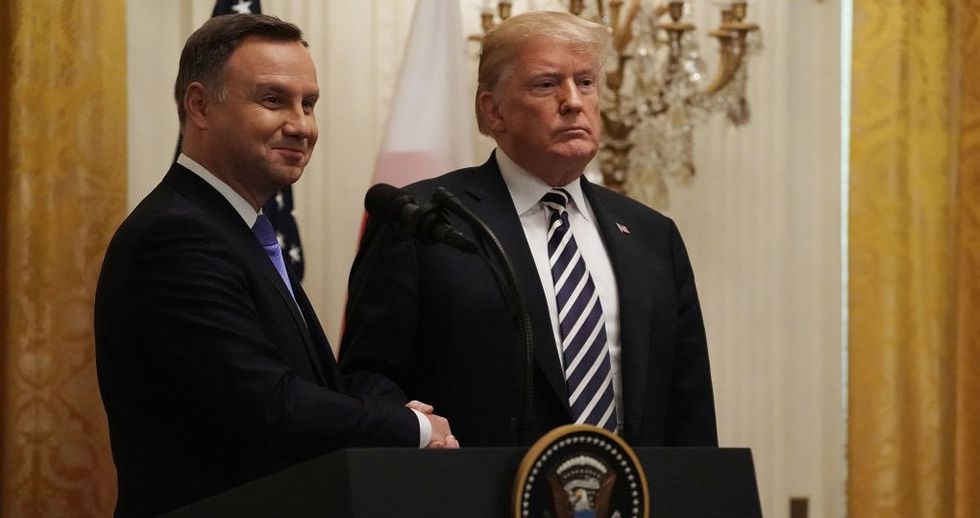 Things seemingly went well for the two. Duda proposed a permanent US military installation in Poland—named Fort Trump—and Trump vowed to consider the offer for strategic and financial reasons. As with most visits by foreign dignitaries, the official White House photographer took many photos.

To commemorate the visit of President Duda and First Lady Agata Kornhauser-Duda, Trump posted a selection of those pictures on Twitter. He captioned the Tuesday afternoon post:

"Today, it was my great honor to welcome [Polish President] Andrzej Duda of Poland to the [White House]!"

The photos chosen show a variety of activities the two leaders engaged in, such as a joint press conference, meetings with Trump's administration and a symbolic signing behind the Oval Office's famed Resolute Desk. But one photo created backlash for Presidents Duda and Trump back in Poland.

This is the photo.

Polish President Andrzej Duda stands next to a seated US President Donald Trump behind the Resolute Desk in the Oval Office. (Twitter)

At the end of their Oval Office meeting, the two Presidents signed a symbolic pact vowing to boost defense, energy, trade and security ties between their nations. By Wednesday morning, the story of the photo appeared across Poland on every major news site.

It is all in the positioning. Trump appears to scowl at the camera as he sits in his chair at the center of the desk. Duda must stand at the corner and bend over to make his signature, but still smiles for the camera.

"It’s nice of President Trump that he moved a bit, because otherwise our president would have had to sign the document on his knees."

Polish newspapers went to scholars in diplomacy for their take on the photo. International diplomacy expert Janusz Sibora called it an "offense." He stated:

"The message is clear: Americans do not respect Poles. If we sign such an important document in that way, we should ask ourselves whether this wasn’t detrimental to the honor of Poland."

Poles made comparisons with other signings with world leaders, such as Trump with North Korean leader Kim Jong Un.

Photos of that event showed the two men seated equally at one table, not one seated center of his own desk while the other hovered at the edge.

However, there may be extenuating circumstances.

It should be noted those photos with Kim occurred on neutral territory in Singapore, not in either leader's home country or in their own office. It is possible Kim would also have been made to stand in the Oval Office while Trump sat.

Based on the photo, President Duda seems unbothered by the perceived slight. However, Pawel Zuchowski also posted on Twitter:

"Signing a Polish-American declaration at the desk of the American president, while he is sitting, and [the Polish president] is standing is a symbolic confirmation [of Andrzej Duda] as a customer [of Donald Trump]. We have never been so low."

Blame for the incident rested on both parties, however, according to the Polish press. The White House should treat world leaders with greater dignity, but the Polish delegation also should have objected to their president being forced to stand off to the side.

Meanwhile, a Facebook page dedicated to controversial former Polish President Lech Wałęsa appeared to troll President Duda with photos of a meeting between Donald Trump the businessman and Wałęsa and the President Trump photo.

Poles also responded directly to Trump's tweet with their outrage.

@realDonaldTrump @prezydentpl @WhiteHouse Posting down left picture had no other purpose then to humiliate… https://t.co/13wY4tOo2q
— FanTomas Szary (@FanTomas Szary) 1537344413.0

Neither president has responded to the backlash yet.