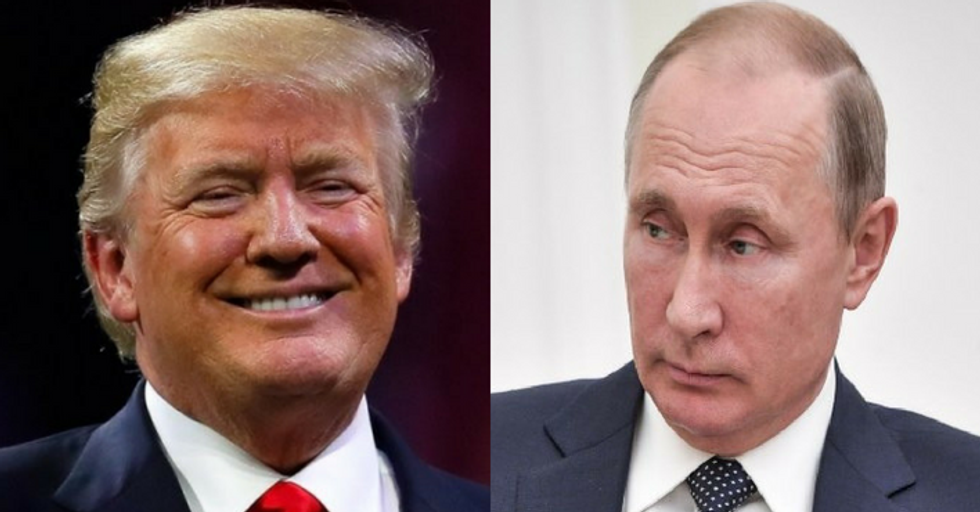 President Donald Trump has raised a few eyebrows with remarks he made during a rally in Great Falls, Montana, Thursday. Trump revived his racist comments —despite being asked repeatedly by Native American leaders to not invoke the name of Pocahontas any longer during attacks on Senator Elizabeth Warren, took a jab at the #MeToo movement and mocked decorated veterans Senator John McCain, who served in the Vietnam War that Trump avoided, and President George H. W. Bush, who was shot down in the Pacific while serving in WWII.

And the president also renewed his public admiration for a man cited by numerous human rights organizations and United States allies for his actions. Trump made some strange comments regarding Russian president Vladimir Putin.

Russia is not an American ally, but Trump speaks of Putin in this video clip from the rally likes he's defending a good friend who just made a few mistakes.

"You know," Trump said appearing to mimic someone else, "President Putin is KGB and this and that..." then, turning to a placating tone, the president added,

While no one has challenged Trump's assessment that everyone involved —Putin's critics, Putin and Trump— are in fact "all people," they do assert that at least one of those people has done some very not fine things.

They shared their concerns on the president's favorite communication system: Twitter. Maybe Trump will see them before he heads to Helsinki to meet Putin in a closed door private meeting.

There are two people in a London hospital right now who were poisoned by him. https://t.co/gy3bmtyEtX
— Matthew Miller (@Matthew Miller) 1530834219.0

Matthew Miller's post refers to the March assassination attempt against former Russian agent Sergei Skripal and his daughter, Yulia, in the British city of Salisbury. The Russian poisoning attack led U.K. Prime Minister Theresa May, an ally of the United States, to expel 23 Russian diplomats from Great Britain.

But that's not the end of the not fine things attributed to Vladimir Putin.

Trump himself is a threat to NATO and he brags about this to shake down US allies like a cheap mobster. "Nice allia… https://t.co/BCzFNvs4Mw
— Garry Kasparov (@Garry Kasparov) 1530883497.0

Some of the things listed, attributed to a Putin led Russia, were the impetus for Russia's removal from the G8 in 2014. This year, Trump asked the G7 to let Russia back in during a rocky meeting in Canada. After the meeting, labeled G6+1, French President Emmanuel Macron said it could always be just G6.

With so many ally voices, foreign and domestic, speaking against Russia and Putin, Trump's devotion to promoting Russia and fondness for the Russian leader raises questions. The Special Counsel Robert Mueller led federal investigation into ties between Russia, the 2016 presidential election and the Trump campaign muddies the waters further.

One Twitter user, Rogue Rich Lund, put forth his own theory for why —despite Trump's own advisers, congressional leaders on both sides of the aisle and foreign allies pointing out issues with Russia— the president continues to not only make diplomatic overtures toward Russia, but openly advocate for both the country and their leader.