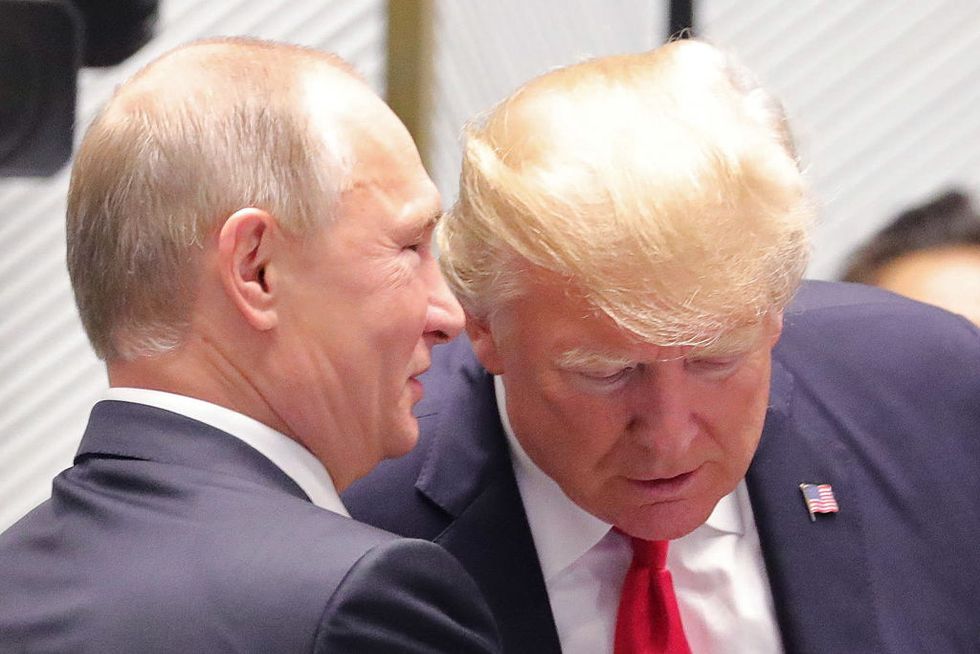 President Donald Trump's administration released a list of 210 Russian leaders and oligarchs as part of its decision to implement a Congressional law designed to punish Russia for election meddling. The report lists, according to CNN, "every senior member of the political administration at the Kremlin, and every Russian oligarch with a net worth of $1 billion or more."

"Sanctions on specific entities or individuals will not need to be imposed because the legislation is, in fact, serving as a deterrent," a State Department official said. According to State Department spokeswoman Heather Nauert, current legislation had already deterred Russian defense sales. "Since the enactment of the CAATSA legislation, we estimate that foreign governments have abandoned planned or announced purchases of several billion dollars in Russian defense acquisitions," she said in a statement. The State Department revealed it also provided a separate classified report to Congressional leaders, which may have included other individuals not listed in the publicly available documents.

Critics of the Trump administration expressed their outrage, characterizing its decision not to impose sanctions as yet another example of its failure to act in the wake of allegations of collusion with Russian officials. In a statement, Representative Eliot Engel (NY), the ranking Democrat on the House Foreign Affairs Committee, said:

I'm fed up waiting for this administration to protect our country and our elections. They've now shown us they won't act, so it's time for Congress to do more. The Trump administration had a decision to make whether they would follow the law and crack down on those responsible for attacking American democracy in 2016. They chose instead to let Russia off the hook yet again.

The US should be prepared to impose sanctions when the law is clearly violated. The administration should not rest in these efforts and I expect a frequent and regular dialogue on this issue.

...as did Senator Clare McCaskill (D-MO):

Congress voted 517-5 to impose sanctions on Russia. The President decides to ignore that law. Folks that is a const… https://t.co/3J8CREPkss
— Claire McCaskill (@Claire McCaskill) 1517314592.0

The release of the list also prompted Russian leader Vladimir Putin to respond. In a public statement, Putin referred to the list as a "hostile step" which further strains present U.S.-Russia ties. Dmitry Peskov, Putin’s spokesman, told reporters earlier this morning that the Russian government would “give in to emotions” before studying the list and its implications carefully.

The Countering America's Adversaries Through Sanctions Act (CAASTA) required the Trump administration to publish the list. When President Trump signed the legislation into law, he criticized it as "seriously flawed," adding that the measure "encroaches on the executive branch’s authority to negotiate":

Congress could not even negotiate a healthcare bill after seven years of talking.  By limiting the Executive’s flexibility, this bill makes it harder for the United States to strike good deals for the American people, and will drive China, Russia, and North Korea much closer together.  The Framers of our Constitution put foreign affairs in the hands of the President. This bill will prove the wisdom of that choice.

At the time, the president did note, however, that he had signed the bill due to is popularity within Congress and among the public:

Yet despite its problems, I am signing this bill for the sake of national unity.  It represents the will of the American people to see Russia take steps to improve relations with the United States.  We hope there will be cooperation between our two countries on major global issues so that these sanctions will no longer be necessary.

The news of the Trump administration's defiance came just hours after the Russia probe dominated the headlines for entirely different reasons: FBI Deputy Director Andrew McCabe, himself a longtime subject of derision among the president and his supporters, announced he would step down. McCabe's departure is a victory for Trump allies, who have intensified a campaign to discredit the Russia probe while alleging that the FBI abused a surveillance law.