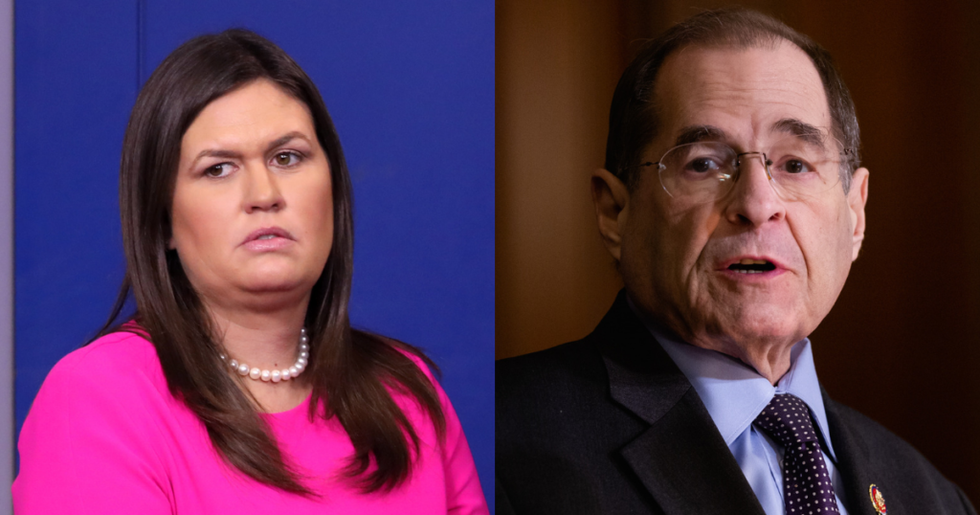 In the hours since the House Judiciary Committee formally launched investigations into abuse of power, corruption, and obstruction of justice by President Donald Trump and his ilk, the White House is leaping to discredit the body designed to keep their boss in check.

Nearly seven dozen of Trump's closest advisors, business associates, and family members were sent letters by Committee Chairman Jerry Nadler (D-NY) on Monday demanding they pony up evidence and testimony relating to Trump's suspected criminality. Those who fail to produce what the Committee is requesting by March 18 risk getting subpoenaed.

This has sent the Trump White House into a public relations tailspin. Press Secretary Sarah Sanders said a statement late Monday night that the Nadler probe is a “disgraceful and abusive investigation into tired, false allegations."

“Chairman Nadler and his fellow Democrats have embarked on this fishing expedition because they are terrified that their two-year false narrative of ‘Russia collusion’ is crumbling. The Democrats are more interested in pathetic political games and catering to a radical, leftist base than on producing results for our citizens."

As if that take was not deluded enough:

"The Democrats are not after the truth, they are after the president.”

The administration is acting like a cat saying "what bird?" as feathers fly out of its mouth.

@desiderioDC @PressSec If Trump & his cohorts are innocent of wrongdoing, the documents will show that. Sarah Sande… https://t.co/XpuDzJ4zSu
— Elizabeth Squires (@Elizabeth Squires) 1551754499.0

In a tweetstorm Tuesday morning, Trump blasted the investigation as the "greatest overreach in the history of our country," labeling it "PRESIDENTIAL HARASSMENT."

Now that they realize the only Collusion with Russia was done by Crooked Hillary Clinton & the Democrats, Nadler, S… https://t.co/PjT0OqusGh
— Donald J. Trump (@Donald J. Trump) 1551791674.0

The greatest overreach in the history of our Country. The Dems are obstructing justice and will not get anything do… https://t.co/i1KyEunDpQ
— Donald J. Trump (@Donald J. Trump) 1551795102.0

Trump campaign spokesperson Kayleigh McEnany said Nadler's investigation is “a disgraceful witch hunt with one singular aim: topple the will of the American people and seize the power that they have zero chance at winning legitimately.” How original.

Their resistance, however is likely to prove futile.

@desiderioDC @PressSec They are the same thing. We are after the truth because we need evidence of Trumps crimes. P… https://t.co/GrVcOuL1Py
— RondaRL (@RondaRL) 1551755386.0

The administration's legal woes have only just begun.

On Tuesday morning, Congressmen Ted Lieu (D-CA) and Don Beyer (D-VA) submitted a criminal referral on Jared Kushner to the Justice Department. Kushner is suspected of lying on his security clearance application, which is a federal felony.

.@RepDonBeyer & I have made a criminal referral of Jared Kushner to @TheJusticeDept. Making false statements or o… https://t.co/FEfXCPdIpf
— Ted Lieu (@Ted Lieu) 1551796137.0

@tedlieu @RepDonBeyer @TheJusticeDept @politico Every single person that has ever filled out a SF-86 form is incred… https://t.co/tMlNttTyx9
— Arya Snark (@Arya Snark) 1551798447.0

@tedlieu @RepDonBeyer @TheJusticeDept @politico Trump's son-in-law is not above the law. Thank you. The @HouseGOP… https://t.co/2WZwqvGkzj
— Karl Schwartz (@Karl Schwartz) 1551796371.0

Even with so much smoke, Democrats in the House are reluctant to pursue impeachment until their case is rock solid.

“This is not a pre-impeachment hearing,” Nadler said on CNN Monday night. “Our goal is not to decide whether there's impeachment. It may come to that if the facts show that, and it may not. Our goal is to protect the rule of law and our country and our liberties and our separation of powers against an administration that is violating all of them.”