Donald Trump Is Getting Dragged for His Gleeful Reaction to Putin's Arrival at an Event in Europe, and Putin Seemed Just As Excited to See Trump 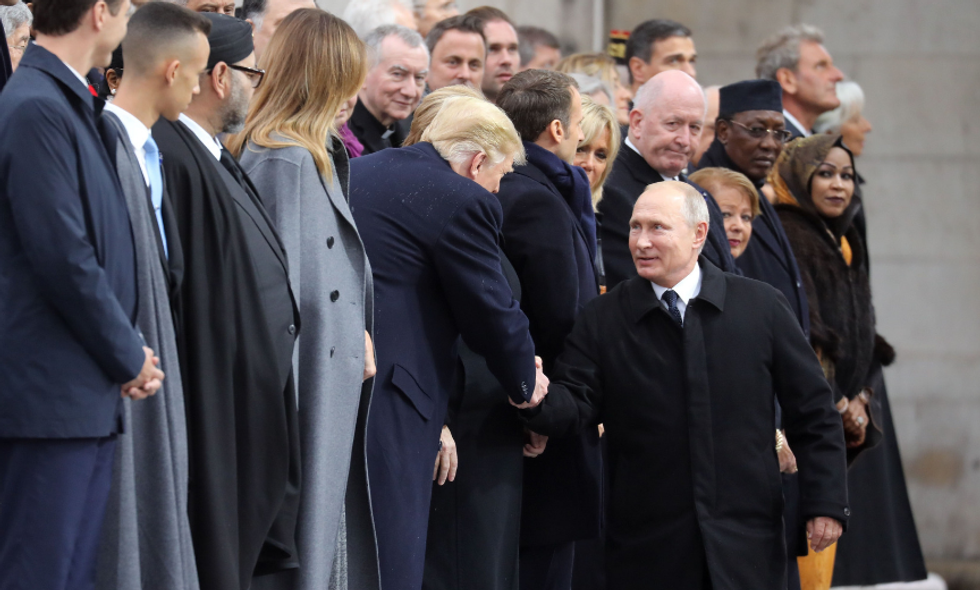 Russian President Vladimir Putin (R) shakes hands with US President Donald Trump as he arrives to attend a ceremony at the Arc de Triomphe in Paris on November 11, 2018 as part of commemorations marking the 100th anniversary of the 11 November 1918 armistice, ending World War I. (Photo by LUDOVIC MARIN/AFP/Getty Images)

President Donald Trump and Russian leader Vladimir Putin shared a warm greeting at an event in Paris, France, to mark 100 years since the armistice that ended World War I.

The two men, whom U.S. intelligence agencies believe together conspired to subvert the 2016 presidential election, arrived separately from the other heads of state who took part in the commemorations, although Trump was already in attendance when Putin arrived, and was caught beaming at the sight of the Russian president.

Putin's appearance was “the only moment” Trump “brightened up,” wrote Julian Borger for The Guardian. “He flashed a goofy smile, all the more noticeable alongside Macron and Merkel who had switched their demeanour to steel resolve on spotting the Russian leader.”

Trump was called out by journalists who posted photographs from the event showing Trump's beaming smile as Putin greeted him, Merkel, and Macron.

The admiration seemed to go both ways.

Video from the event shows that Putin greeted Merkel and Macron with handshakes, but that Trump received "a thumbs-up and a friendly pat, too," according to former New York Times and NBC political analyst Anand Giridharadas‏.

Trump and Putin were going to have a one-on-one meeting in Paris, but those plans were scuttled amid Macron's concerns that the meeting would overshadow the Armistice Day commemorations. Putin later told Russian state media that he did find time to talk to Trump in Paris.

The ceremonies marked the first time the two men had met since a controversial face to face meeting in Helsinki over the summer.

“President Putin says it’s not Russia. I don’t see any reason why it should be,” Trump responded after he was asked if he concurred with the findings of U.S. intelligence agencies that Russian operatives launched unprecedented cyber attacks on the democratic process.

The scandal prompted many to intensify their calls for impeachment, and even some top Republicans said the president’s deportment was indefensible. Trump later walked back his assertion, claiming he’d misspoken, before retracting his statement and then retracting that statementonce more. His attacks on Special Counsel Mueller’s probe have increased significantly in the weeks since his former attorney and fixer Michael Cohen implicated him in a federal crime.

The month after the meeting, Trump asserted that China had hacked Hillary Clinton’s emails, without offering any evidence for the claim. The president also suggested that the FBI and the Department of Justice should investigate, adding that “their credibility will be forever gone” if they don’t follow through.

Hillary Clinton’s Emails, many of which are Classified Information, got hacked by China. Next move better be by the… https://t.co/ZunThshXTW
— Donald J. Trump (@Donald J. Trump) 1535515905.0

“We are firmly opposed to all forms of cyberattacks and espionage,” foreign ministry spokeswoman Hua Chunying said at a regular briefing Wednesday, adding that China is a leading defender of cybersecurity.

Others criticized the president for what they say is just another in his long line of deflections against Mueller and his probe into Russia’s subversion of the 2016 presidential election.

In July 2016, Trump, then a presidential candidate, invited Russia to hack Hillary Clinton’s emails, asking the Kremlin to find “the 30,000 emails that are missing” from the personal server she used during her tenure as Secretary of State.

Trump’s remarks shocked the Clinton campaign––to say nothing of the world––and many perceived them as a potential threat to national security. Trump, as he does with most criticism, shrugged off these concerns. He made the request of the Russians on July 27, 2016.

And on that same day, according to an indictment that the Justice Department released in July, the Russians took Trump up on his offer.

The news was the confirmation many had waited for and caused some political commentators and members of the media to call out their colleagues for spending so much time focusing on the stories about Hillary Clinton’s emails rather than the specter of Russian collusion which lingered over the country even before the 2016 presidential election was in full swing.