New Poll Shows Donald Trump's Approval Rating Plummeting After His Meeting With Putin, and It Just Gets Worse for Trump From There 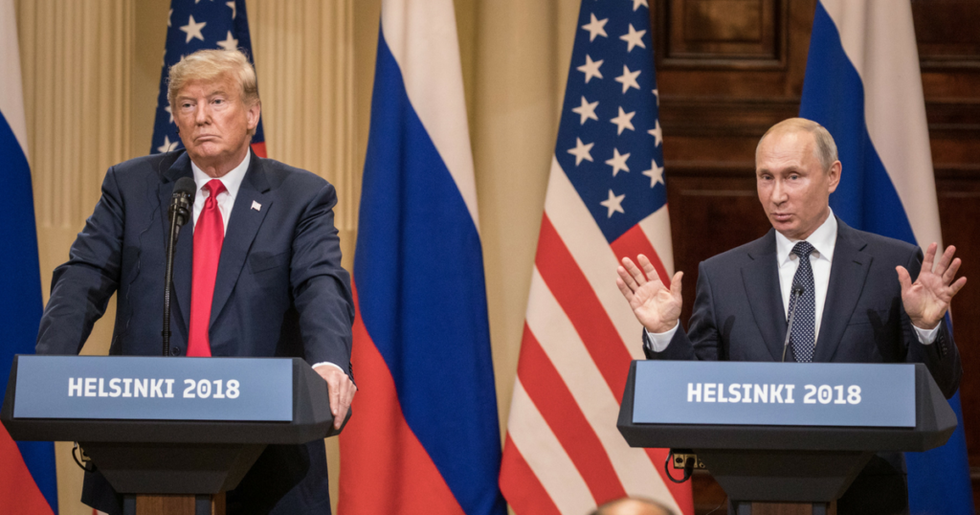 President Donald Trump's approval rating has dipped to 38 percent after his meeting with Russian leader Vladimir Putin last week and, more specifically, after he sided with Putin over the assessment from U.S. intelligence agencies that Russian operatives had launched cyberattacks against the United States in its attempt to subvert the 2016 presidential election and undermine American democracy.

According to the latest Quinnipiac University poll, 38 percent of Americans believe the president is faring well in office compared to 58 percent who believe he is not. That's a stark differential from a negative 43 - 52 percent rating in a June 20 Quinnipiac poll after Trump's summit with North Korean leader Kim Jong Un.

The president's only clear support among listed groups is from Republicans, who approve 82 - 15 percent, and white evangelical Christians, who approve 71 - 26 percent. White voters with no college degree are split 49 - 47 percent and white men are divided as 49 percent approve and 47 percent disapprove.

Voters disapprove 58 - 38 percent of the way Trump is handling foreign policy and say 51 - 35 percent that he has weakened the U.S. position as leader of the free world.

This investigation is "legitimate," 54 percent of voters say, while 40 percent say it is a "witch hunt."

A total of 63 percent of voters are "very concerned" or "somewhat concerned" that the Russian government may try to interfere in the 2018 elections, as 36 percent are "not so concerned" or "not concerned at all."

The majority of Republicans (70 percent) say they don't believe there is compromising information and Republicans, Quinnipiac observes, are "the only listed party, gender, education, age or racial group which does not believe it."

It gets worse for the president from there. Matt McDermott, a pollster and director for Whitman Insight Strategies, notes that Quinnipiac found that 41 percent of voters believe that the Senate should not confirm Brett Kavanaugh's nomination to the Supreme Court, and that 68 percent of voters do not want Roe v. Wade––the landmark Supreme Court ruling seen as a victory for women's abortion rights––overturned.

Wow, the latest Quinnipiac poll finds that a plurality of voters (41%) believe that the Senate should reject Brett… https://t.co/alw7vZb3A5
— Matt McDermott (@Matt McDermott) 1532540188.0

By contrast, the president has often claimed that a majority of voters approve of his Supreme Court pick, but others have expressed outrage at the notion that a president under federal investigation could nominate someone with the potential to sway the court’s opinion in the event of an indictment.

To that end, it’s obvious why the president ultimately picked Kavanaugh, who is perhaps best known for the leading role he played in drafting the Starr report, which advocated for the impeachment of President Bill Clinton and whose views about when to impeach a president are likely to become contentious subjects during his Senate confirmation hearing.

Quinnipiac also has Democrats up 12 points on the generic ballot, at 51 percent, though many within the party are urging their constituents not to become complacent and vote in November's midterm elections regardless.

In case there are any reservations about these poll results, it's worth noting that Quinnipiac conducted its own polling after an NBC/WSJ poll which found Trump's approval rating trending upward after his performance in Helsinki.

Just to be clear: The NBC/WSJ poll was conducted half before/during Helsinki, half afterward. All of Quinnipiac w… https://t.co/oDV1bmXMxl
— Mark Murray (@Mark Murray) 1532452140.0

Adding to the president's troubles, calls for his impeachment have intensified since he sided with Putin.

The president walked back that assertion, saying he had misspoken when he appeared to accept Putin’s denials that Russia interfered. Then he walked back his walk back.

Pressure has mounted on Democrats to launch impeachment proceedings, and in Europe, the odds that Trump won't be impeached are not in his favor.

British and Irish punters “are putting up money 2 to 1” on President Donald Trump’s impeachment, according to Lee Price, a spokesman for Paddy Power, a bookmaker that manages betting shops in Britain and Ireland and that runs Ireland’s largest telephone betting service.

“What this whole Moscow gruel has taught us is that the Donald is still the biggest ticket in town — and people love to bet on his downfall,” Price told The Washington Post on July 18, noting that the odds that Trump is impeached are now 2 to 1, or 33 percent. That’s a notable change from 4 to 1, or 20 percent, on Monday before the news conference afte Trump’s summit with Putin.

“Given the complexity of the impeachment process, that’s an unprecedented price in terms of how short it is,” Price said. “No president in modern history has had such short odds.”

As if to underscore that statement, Price said that bets on when Trump would be impeached have been the most popular since he took office in January 2017.