Trump Just Commented on Paul Manafort's Trial, And Some Believe What He's Done is an Impeachable Offense 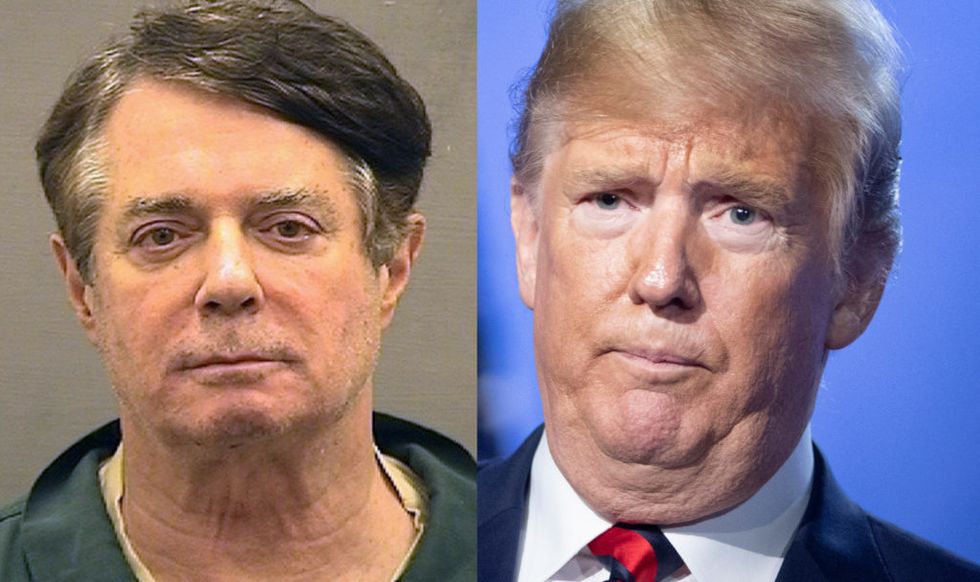 The president spoke to reporters about the trial on Friday.

Trump answered when asked if he'd consider granting Manafort a presidential pardon in the future:

I think the whole Manafort trial is very sad, when you look at what’s going on there. I think it’s a very sad day for our country. He worked for me for a very short period of time. But you know what? He happens to be a very good person. And I think it’s very sad what they’ve done to Paul Manafort.

The statement, according to some, is a reckless one.

Because attempting to influence a jury outside of the courtroom is a crime, it's highly unusual for someone with the stature of a sitting president to express an opinion of a defendant in an ongoing trial. Jurors are told to ignore any information on the trial that isn't presented in the court as evidence. With a trial as notable as Manafort's and in an age of immediate news, that's undoubtedly difficult. Trump's statements on it only exacerbate the situation.

Because the Manafort jury was finalized in less than a day, it's hard to guarantee jurors were screened for partisan leanings as exhaustively as a trial of this nature mandates. With Trump's base having shown itself to be exceedingly loyal to the president, it's not far-fetched to believe a juror could take it upon him or herself to act on behalf of the president's sentiments.

It's a predicament that's alarming some.

If the jury isn't sequestered, which it isn't, how aren't Trump's comments this morning (which the jury will hear) jury tampering?
— Peter Gleick (@Peter Gleick) 1534526532.0

This sounds suspiciously like Trump is sending Manafort a message to stay strong and not cut a plea deal with the g… https://t.co/tRdh5NwgUk
— Joyce Alene (@Joyce Alene) 1534522430.0

The possibility of tampering isn't the only aspect of Trump's statement that some have found troubling.

Some seem to think that Trump is considering pardoning Manafort.

The evidence stacked against Manafort is quite formidable, with former business partners testifying against him as well as excessively lavish expenses leaving a paper trail of possible money laundering. Trump's statement seems to express that Manafort was ambushed by a justice system gone awry.

It isn't the first time the president has stood up for Manafort.

Earlier this month, the president said that Manafort was being treated worse than infamous gangster Al Capone.

The possibility of a pardon is becoming increasingly unsettling.

So I generally choose not to hang on every twist of the Mueller investigation, but if Trump pardons Manafort (after… https://t.co/yJ2YRldGEg
— Chris Murphy (@Chris Murphy) 1534527484.0

It doesn't appear that the jury will reach a verdict today. Now that Trump's comments are being widely reported, it's impossible to say as of now how his words may influence the jury.