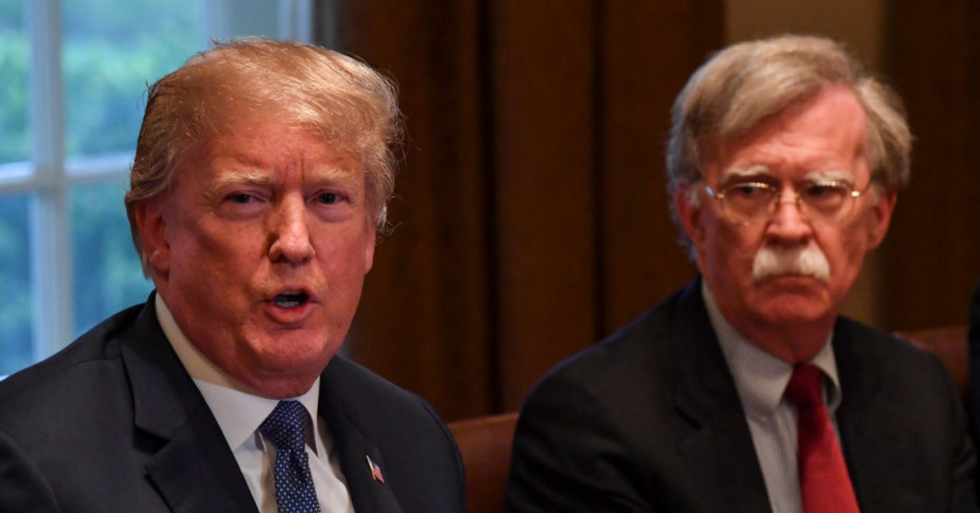 One of President Donald Trump's own tweets has resurfaced amid news that the White House is reviewing military plans against Iran and is considering sending as many 120,000 troops to the Middle East should Iran attack American forces. In the tweet, written in 2012, Trump urged Republicans to not "let [former President Barack] Obama play the Iran card in order to start a war in order to get elected."

But it appears that's what Trump is attempting to do at the urging of John Bolton, his national security adviser and an Iran war hawk whose previous calls for a confrontation with Tehran a decade ago were ignored by then-President George W. Bush. Critics like Representative Ilhan Omar (D-MN) say Congress must move to prevent Trump and Bolton from "laying the groundwork for another war."

This is chilling. Trump and John Bolton are openly laying the groundwork for another war. The only thing we’re rel… https://t.co/Zw1KbDofAA
— Ilhan Omar (@Ilhan Omar) 1557855604.0

NO WAR WITH IRAN! This would be an unmitigated disaster. We must stop Trump and his national security advisor, John… https://t.co/F1kpgJNlUa
— Bernie Sanders (@Bernie Sanders) 1557848133.0

This alarming headline should be a wake-up call to us all. The Trump administration’s saber-rattling foreign policy… https://t.co/YmccorHJFA
— Tom Udall (@Tom Udall) 1557841779.0

Trump ran for President opposed to the Iraq War. Now he wants to start one with Iran. That’s what happens when you’… https://t.co/vOkBiGOcFj
— VoteVets (@VoteVets) 1557846913.0

It's still uncertain whether Trump, who has sought to pull troops out of Syria and Afghanistan, would send such a large number of troops back to the Middle East. That number, according to a New York Timesreport, "would approach the size of the American force that invaded Iraq in 2003."

Tensions between Iran and the West have risen since four oil vessels were attacked at the mouth of the Persian Gulf over the weekend. Although Emirati officials are still investigating the matter, American officials suspect Iran was involved.

Last week, the U.S. announced new sanctions after President Hassan Rouhani warned Iran would withdraw from the 2015 Iran nuclear deal. Trump's decision to exit the agreement a year ago has sparked fears that it could destabilize the Middle East. Trump had long campaigned against the nuclear deal and made exiting the agreement one of the signature pledges of his candidacy during the 2016 presidential election.

“This was a horrible one-sided deal that should have never, ever been made,” Trump said last year. “It didn’t bring calm, it didn’t bring peace, and it never will.”

Trump had earlier criticized the deal as one of the Obama administration’s “worst” decisions, and in his statements, he expressed his belief that the deal served to benefit the Iranian regime while sponsoring terrorism.

“At the point when the US had maximum leverage, this disastrous deal gave this regime — and it’s a regime of great terror — many billions of dollars, some of it in actually cash — a great embarrassment to me as a citizen,” Trump said at the time.

European leaders have acknowledged they wish to sustain the agreement, which provides Iran some relief from international sanctions in exchange for limits on and guarantees of transparency about its nuclear aspirations.