Justin Trudeau Just Confronted Donald Trump Over Trump's Tariff Policy Right to His Face, and People Are Loving It 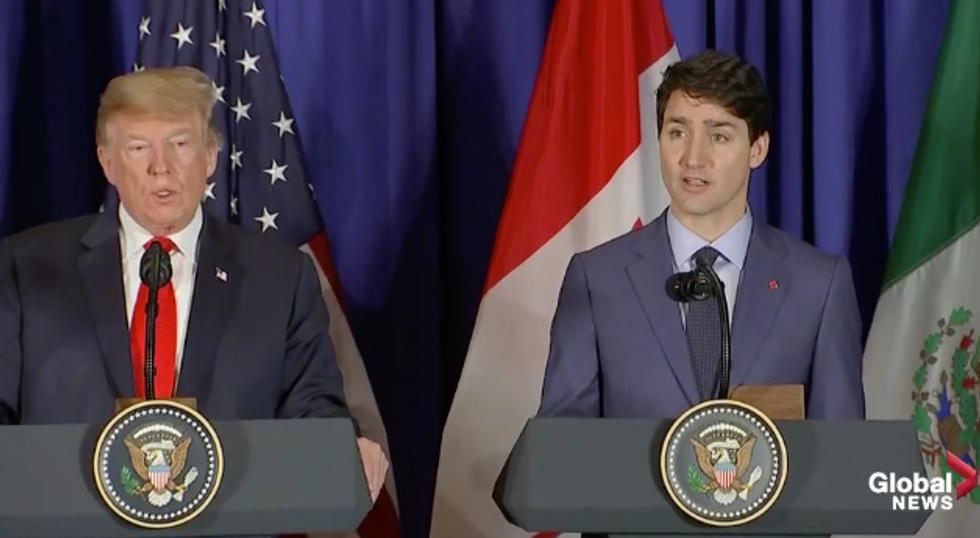 Prime Minister Justin Trudeau appeared with President Donald Trump to speak to reporters after signing of the United States-Mexico-Canada Agreement (USMCA) agreement in Buenos Aires in advance of the G20 Summit. The two leaders signed along with Mexico President Enrique Pena Nieto.

During his remarks, Trudeau confronted Trump over his tariffs that are being blamed for shut downs of General Motors plants in both the United States and Canada. Trudeau stated:

"We will not rest while those barriers remain. Canada will be as relentless in meeting this challenge as we were in updating NAFTA."

"Donald, it’s all the more reason why we need to keep working to remove the tariffs on steel and aluminum between our countries."

The use of the President's first name echoed Trump's own criticisms of Trudeau where he referred to the Canadian leader as "Justin" at his Make America Great Again rallies and on Twitter.

Trudeau also referred to their agreement as the "updated" or "new NAFTA" instead of the name preferred by the President. USMCA is meant to distinguish it from the accomplishment achieved by the original North American Free Trade Agreement negotiated by President George H. W. Bush and ratified under President Bill Clinton.

During the signing ceremony, Trump proudly held up the agreement after signing it, as is his custom. President Pena Nieto followed suit for the cameras, but Trudeau refused.

Trudeau faced criticism at home over signing the agreement with Trump while tariffs remain in place on steel and aluminum. That lack of support for the updated NAFTA prompted Trudeau's reiteration of a need for continued dialogue.

Legislators in Canada, the US and Mexico must approve the new deal before it goes into effect. The United States Congress will likely not address the agreement until after the newly elected Congress goes into session.

People noticed the tension between the two leaders.

I love how @JustinTrudeau is trolling #Trump hard by switching from English to French to English and back to French… https://t.co/lUnyJ6wC5A
— Taha Meli Arvas (@Taha Meli Arvas) 1543582043.0

For those pointing out that Canada is a bilingual country, yeah I know, thanks.The point is Trudeau didn't do the f… https://t.co/dFMJ4lWNLq
— Taha Meli Arvas (@Taha Meli Arvas) 1543588898.0

General Motors recently announced the closing of five locations, four in the United States and one in Canada. The company pointed to President Trump's trade wars that he started with former trading partners in Asia, North America and Europe.