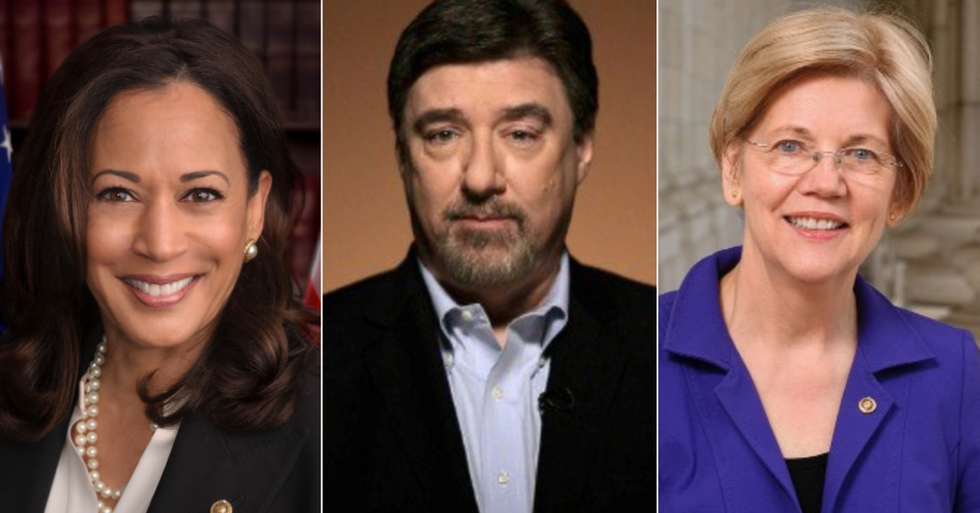 Conservative historian Tom Nichols decided there are worse things than a progressive Democrat in the White House: President Donald Trump.

In an OP-ed piece for USA Today, Nichols spelled out his view in explicit detail.

He prefaced the piece titled "Why this Never Trump ex-Republican will vote for almost any 2020 Democratic nominee" with the statement:

"I'm good with anyone who is mentally stable and in no way sympathetic or beholden to a hostile foreign power. That's it. Policy just doesn't matter."

He then goes on to detail all the odd and amusing things Democratic candidates could ask of him and still not lose his vote.

"[Massachusetts Senator Elizabeth Warren] could tell me that she’s going to make me wear waffles as underpants and I’ll vote for her."

"[California Senator Kamala Harris] could tell me that I have to drive to work in a go-cart covered with Barbie decals and I’ll vote for her."

"[Vermont Senator Bernie Sanders] could tell me he’s going to tax used kitty litter and I’ll vote for him."

As far as we know, these initiatives are not on any Democratic candidates' platform.

Although Nichols did have some limits—as should we all.

"I don’t care if Hawaii Representative Tulsi Gabbard is clearly influenced by a hostile foreign government or that Marianne Williamson is a weird, anti-science guru. They could…"

"Wait. I do care about that. It’s the reason they won’t get my vote next year, and why the President won’t either."

Then stated the whataboutisms being flung at Democratic presidential candidates by his fellow conservatives are merely distractions to make people forget:

"...President Donald Trump is both unstable and compromised."

Nichols clarified his position, which he maintained for over two years.

"Even before the Mueller report laid bare the degree to which the Trump campaign welcomed Russian help, it was obvious that Trump feared Russian President Vladimir Putin — not only because Putin knew how much Trump had lied to the American people during the campaign about his dealings with Russia, but also likely because Moscow holds Trump’s closest financial secrets after years of shady dealings with Russian oligarchs."

Nichols explained why he could live with policies he did not like over four more years with Trump: mental stability.

"As much as conservatives hate to admit it, governing by executive order or supporting the financial evisceration of rich people is not a sign of an emotional disorder."

For Nichols and many others, policies that do not benefit conservatives' bank accounts—a Democratic President—are compared to the situation under Trump, where:

"Trump has never been a reasonable man, but for two years, he has gotten worse."

"He literally cannot tell the truth from a lie, he often seems completely unable to comprehend even basic information, and he flies off the handle in ways that would make most of us take our children to a pediatrician for evaluation."

"First, he or she must not be obviously mentally unstable."

"Second, the nominee must not be in any way sympathetic — or worse, potentially beholden — to a hostile foreign power."

"This rules out Gabbard, Williamson and maybe New York City Mayor Bill de Blasio, although in de Blasio’s case it’s hard to tell whether he is unstable or just a terrible person."

While admitting he is unlikely to agree with the Democratic President's policies, Nichols stated all the candidates will understand "the nuclear" and "the cyber" better than Trump.

He also called into question what segment of voters influences Trump and by extension holds undue influence over Congress.

"I will feel like I have a shot at trying to convince my elected representatives that they should listen to the policy preferences of normal human beings instead of two old men wearing shirts that say they’d 'rather be a Russian than a Democrat,' or a woman in a shirt indicating that she is willing to have the President grab her genitalia."

Nichols added he would be unlikely to approve of the Democratic President's cabinet nominees and aides, but they would at least be competent and qualified instead of the "unprincipled cronies who keep their own boss in the dark while taking a hatchet to the Constitution" of the Trump administration.

"It is a sign of how low we have fallen as a nation that 'rational' and 'not compromised by an enemy' are now my only two requirements for the office of the President of the United States."

"Perhaps years of peace and prosperity have made us forget the terrifying responsibilities that attend the presidency, including the stewardship of enough nuclear weapons to blow the Northern Hemisphere to smithereens."

"As long as the Democrats can provide someone who can pass these simple tests, their nominee has my vote."

It received mostly favorable responses from his compatriots.

Although not everyone was on board.

But they were shut down as being very Trumpian—compulsive lying, fantastic and easily refuted claims—in their comments.

@I_WantChips @RadioFreeTom @allahpundit @USATODAY Meanwhile, back in reality, none of the Democratic candidates want any of those things.
— Jason Fischer (@Jason Fischer) 1565885047.0

For those unfamiliar with Nichols, he is an acclaimed academic currently working as:

Before coming to the Naval War College, he taught international relations and Russian affairs for many years at Dartmouth College and Georgetown University and was a Fellow at the Center for Strategic and International Studies in Washington, DC.

Nichols is the author of several books including The Death of Expertise: The Campaign against Established Knowledge and Why it Matters, available here.