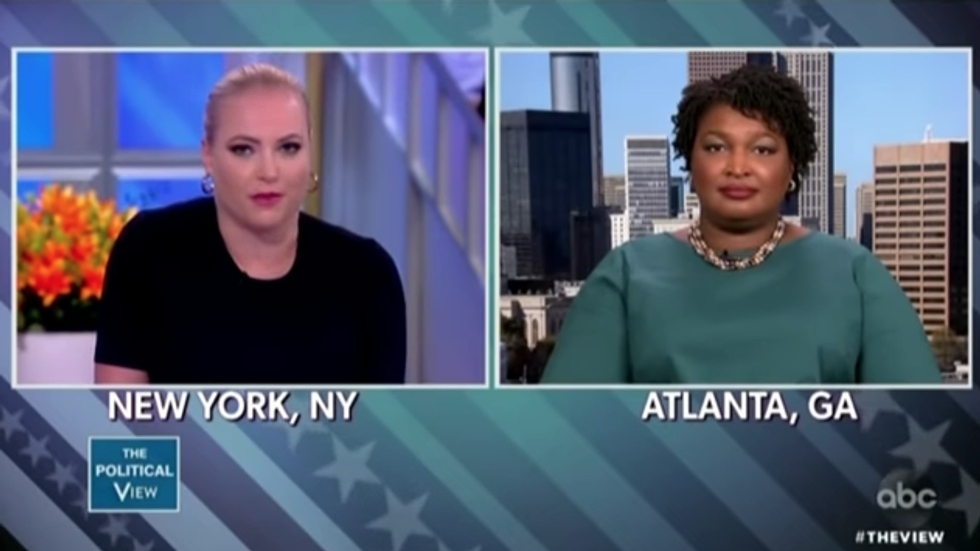 Stacey Abrams, the Democratic candidate for Georgia governor, smacked down Meghan McCain on The View Tuesday after McCain tried to lob a "gotcha" question at Abrams over her stance on gun rights.

McCain asked Abrams if she supported banning the AR-15, which has been the weapon of choice in dozens of mass shootings in the United States. Most recently, an AR-15 was wielded by a gunman who stormed into a Pittsburgh synagogue on Saturday, killing 11 Jewish worshippers.

“I’m not anti-gun. My great-grandmother taught me how to shoot when I was growing up in Mississippi. I like trap shooting, I like target shooting," Abrams replied. “I don’t hunt because I mostly eat chicken and that seems mean,” Abrams joked.

Abrams continued, adding that “most responsible gun owners understand that they have the responsibility for the firearms, and making sure that only responsible people have those firearms.”

Abrams said she supports "a background check" and a "mandatory 3-day waiting period" for firearms purchases, and that she believes "those who commit domestic violence and stalking should not have access to weapons."

Abrams went on to say that "weapons of mass destruction" such as the AR-15 do not belong "in civilian hands."

Following thunderous applause, Abrams was challenged by McCain on how she would implement a ban on AR-15s.

"Would you round them up?" McCain asked.

"We have had a ban on assault weapons before in the United States and I think that we should do it again," Abrams fired back. "I think that there has to be a conversation of how it's accomplished," she added, "because we have to recognize that this is a national conversation."

Abrams concluded by saying she supports the Second Amendment as "the law of the land" and that it's possible to both "believe in responsible gun ownership" and support limits on the types of arms civilians are able to buy.

"When you can't go into a synagogue or a church, or a school, or a movie theater without fear for your life," Abrams charged, "there is something wrong with our system of gun ownership and we have to fix it."

Twitter took notice of McCain's final reply, "I appreciate your honesty, why you want to ban it," as a sign that McCain wasn't really listening. Many saw it as disrespectful.

@notcapnamerica Because McCain wasn't listening. She was just waiting for Abrams to finish so she could regurgitate… https://t.co/ClKL0Fn0Ff
— Jerry Bailey (@Jerry Bailey) 1540919452.0

@shannonrwatts @MeghanMcCain Did McCain try to slip in there "I know you want to ban it?" even though Abrams just s… https://t.co/5aMwOxWIRa
— Julia Bricklin (@Julia Bricklin) 1540919369.0

The overwhelming consensus on social media is that Abrams nailed her response.

Abrams is gathering praise for being a leader.

@TheView @staceyabrams Loved, loved this interview. Stacey Abrams is very bright and quite savvy, her responses to… https://t.co/wXiEm3jBwi
— hurti5 (@hurti5) 1540914761.0

Abrams is locked in a tough race against Georgia Secretary of State Brian Kemp, who also happens to be the person in charge of managing the election. This has fueled calls from the left for Kemp to step down amid reports of voter suppression tactics aimed at preventing black people from casting a ballot.

On Monday, former President and Georgia native Jimmy Carter (D) wrote a letter to Kemp urging him to resign his post as secretary of state for the sake of the integrity of the election.

"In Georgia's upcoming gubernatorial election, popular confidence is threatened not only by the undeniable racial discrimination of the past and the serious questions that the federal courts have raised about the security of Georgia's voting machines, but also because you are now overseeing the election in which you are a candidate," wrote Carter, who was elected president in 1976 after serving as Georgia's governor.

"This runs counter to the most fundamental principle of democratic elections," the 94-year-old humanitarian said, "that the electoral process be managed by an independent and impartial election authority."