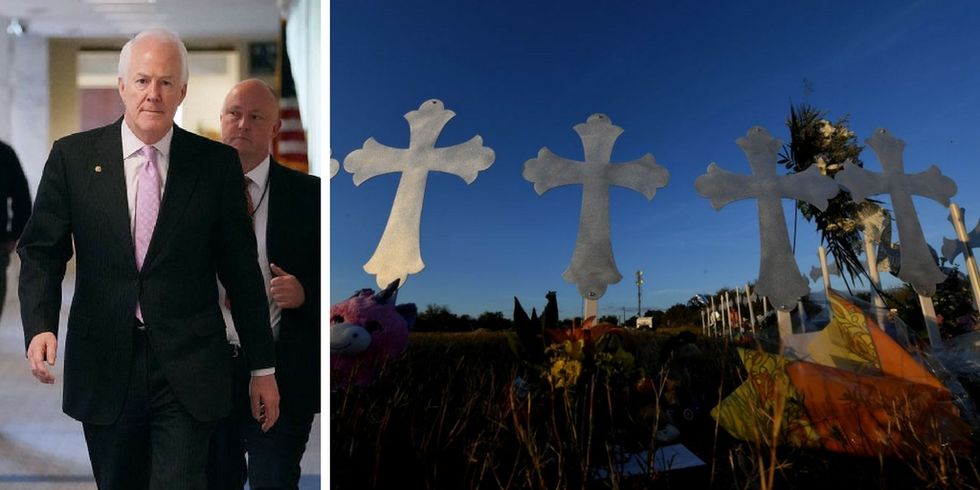 The No. 2 Republican in the Senate, Texas Senator John Cornyn, said on Tuesday that he will introduce a background check bill for gun purchases. This is in response to the mass shooting at the Sutherland Springs Baptist church in Texas, where Devin Patrick Kelley killed 26 people, half of them children, on Sunday. The proposed legislation will require all federal agencies to upload criminal records to a national database, that must be checked before a person can purchase a gun.

“I plan to introduce legislation ... to ensure that all federal departments and agencies, including the Department of Defense, upload the required conviction records into the national database,” Cornyn said in a statement.

This shift in policy comes after the discovery that the Texas church shooter had slipped through the cracks of the system. The Air Force did not previously report Kelley's 2012 court-martial, for which he was convicted of assaulting both his wife and stepson, and subsequently dishonorably discharged. The Air Force failed to enter the conviction into an FBI database used during background checks.

"If the shooter was dishonorably discharged, federal law prohibited him from buying or possessing any firearms," tweeted Senator Cornyn. He added that, "A domestic violence conviction disqualifies gun purchaser on background check."

Due to this oversight and others, Senator Cornyn says that background checks have too many gaps, and furthermore, he said he will work with Democrats in a bipartisan effort to close those gaps.

Later on Tuesday, Senate Judiciary Chairman Chuck Grassley of Iowa said that his November 14 panel next week will discuss regulation of firearm accessories, including bump stocks such as the one used by the Las Vegas shooter, who killed 58 people on October 1. The panel will also discuss the bolstering and enforcement of the national criminal background check system for anyone who wants to purchase a gun. The scheduling of this rare gun-control hearing follows Senator Cornyn's announcement that he's willing to work across the aisle, in order to close gun-purchasing loopholes, and to legislate better gun laws and regulation.

The senator shared news of the hearing on Twitter, showing his support.

The senator also told reporters that he has spoken with Democratic Senators Chris Murphy, Jeanne Shaheen and Martin Heinrich in hopes of finally improving gun legislation:

“I don’t think we will be able to stop all of these sort of things, but if we can stop one” it would be worthwhile, Cornyn said while in Washington. While he predicts that talks of restricting gun rights will experience another "stalemate," he believes that fixing and updating existing gun laws is something "we ought to be able to work together.”