Parent-teacher conferences could get awkward. 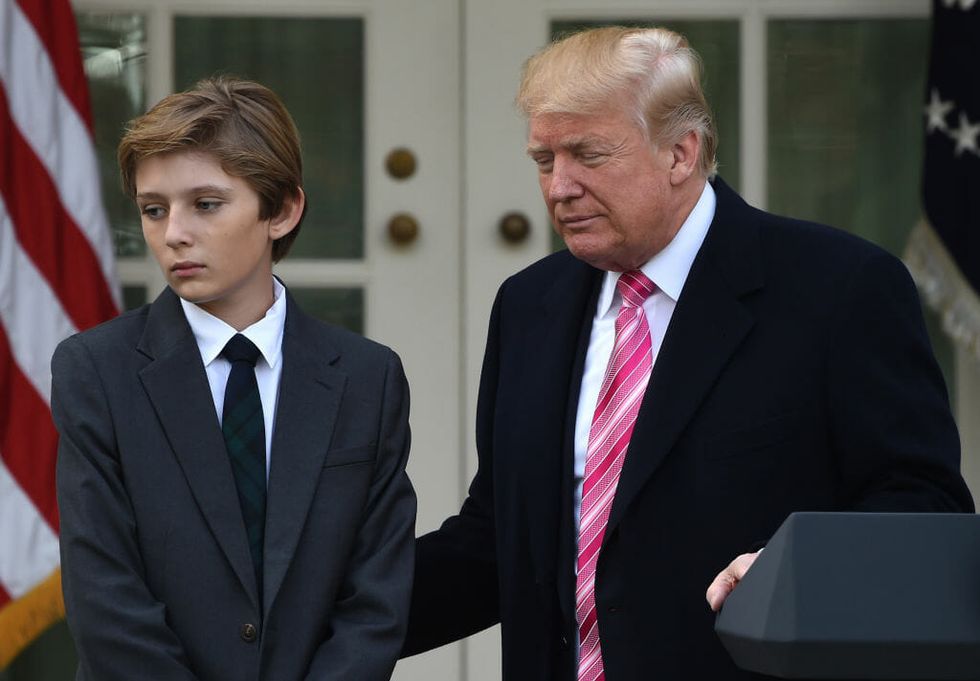 US President Donald Trump walks with his son Barron to a turkey pardoning ceremony at the White House in Washington, DC on November 21, 2017. (ANDREW CABALLERO-REYNOLDS/AFP/Getty Images)

St. Andrew’s Episcopal School in Potomac, Maryland, the school attended by President Donald Trump's youngest son, Barron, joined more than 125 private independent schools in the D.C. area that are calling on the president and Congress to enact “vigorous” gun control measures in an open letter published Thursday by The Baltimore Sun. Barron, who turns 12 years old today, began attending the school––where tuition is $40,000 a year––in 2017.

The letter urges legislators to strengthen national background checks for firearm registration, specifically toward weapons “capable of rapidly firing a vast number of deadly shots." The school leaders also rebuked the president's proposal to arm teachers, calling it "dangerous and antithetical to our profession as educators.”

The full ad is below:

For years now, citizens of the United States have endured mass shootings in public venues, neighborhoods and communities, houses of worship, colleges and universities, and our schools. Children, our most vulnerable citizens and our hope for the future, are dying from gun violence, again and again.

Statistics from countries around the globe show that it is possible to minimize gun deaths through common-sense legislation. Here in the United States, we see that easy access to weapons, particularly those of military-style design, results in significantly higher levels of gun violence.

We urge our President, Our Congress, and our state leaders to enact specific, vigorous measures to reduce gun violence in our society, particularly in our schools. We need a robust system of registration and background checks, with a particular eye toward weapons capable of rapidly firing a vast number of deadly shots. We need stronger mental health services and more effective communication among agencies responsible for the well-being of children, adults and families. What we do not need is to arm our teachers with guns, which is dangerous and antithetical to our profession as educators.

The ad was also placed in other newspapers, including Sunday's edition of The Washington Post.

The letter appeared on the same day as the National School Walkout, where thousands of students across the nation left class temporarily to demand action on gun violence. Those who participated in the march have demanded Congress to ban assault weapons, require universal background checks before gun sales and pass a “gun violence restraining order law” which would allow courts to disarm people who exhibit warning signs of violent behavior.

While the Trump administration last week issued a proposal which would provide some school personnel with “rigorous” firearms training and strengthen criminal background checks, but stopped short of increasing the minimum age to buy certain firearms. Previously, President Donald Trump had promised a change in the age requirement.

The president will also move ahead with an earlier proposal to ban bump fire stocks, which allow semiautomatic weapons to fire more rapidly. The Justice Department, per Attorney General Jeff Sessions, has submitted a proposed regulation to the Office of Management and Budget for review. The proposed regulation would ban bump stocks, classifying them as machine guns under federal law.

The proposal also includes a plan to establish a commission chaired by Education Secretary Betsy DeVos which will weigh in on policy and “funding proposals for school violence prevention,” according to CNN. An official said the commission does not yet have a specified timeline of when it will report its findings and recommendations but said it should be within one year.

According to the proposal:

The administration has thrown its support behind the “Fix NICS” bill introduced by Senators John Cornyn (R-TX) and Chris Murphy (D-CT). The bill would set aside funding to improve the National Instant Criminal Background Checks system. The bill would hold federal agencies accountable if they fail to upload records to the background check system.

Congress has seemed apprehensive about strengthening the bill, but Trump has called for a more “comprehensive” measure.

The administration has also signaled it would support the “STOP School Violence Act,” which would provide states with “funding for training, technology and other assistance to help schools identify and prevent violent acts.” The administration also announced it would support “extreme risk protection orders”––which it encourages the states to adopt.

These “extreme risk protection orders” would allow law enforcement officers, provided they have court approval, to remove firearms from those who pose a threat to themselves or others. The orders would also allow law enforcement to temporarily prevent these individuals from purchasing new firearms.

Additionally, the president is “calling for a review of the statutory and regulatory privacy protections to determine if any changes or clarifications are needed to improve coordination between mental health and other health care professionals, school officials, and law enforcement personnel.”

Further, the administration announced that the proposed Federal Commission on School Safety will work on implementing processes to evaluate and make recommendations on school safety.

The commission will focus on:

But the proposal has not been without its critics, who allege the Trump administration is in the NRA's pockets. Indeed, the NRA has supported the lack of an age increase, the proposal to arm teachers, the expansion of mental health programs, the encouraging of the states to take guns away from "dangerous" people, and the initiative to place retired law enforcement officials and military veterans in schools, while knocking back any hint of gun regulations in the wake of a mass shooting at Marjory Stoneman Douglas High School in Parkland, Florida, where 17 people died.

The proposal was issued a couple of weeks after NRA-ILA Executive Director Chris Cox tweeted that the Trump and Vice President Mike Pence, with whom he spoke during a closed-door meeting at the White House, "don't want gun control."

"I had a great meeting tonight with @realDonaldTrump & @VP. We all want safe schools, mental health reform and to keep guns away from dangerous people. POTUS & VPOTUS support the Second Amendment, support strong due process and don’t want gun control," Cox wrote.

The president later acknowledged the meeting, which took place after he stunned Democratic and Republican lawmakers during a meeting at the White House when he endorsed a list of gun proposals, including raising the age to purchase a rifle from 18 to 21 and confiscating guns from individuals deemed dangerous without following due process.